for a long time i’ve been wanting to use neo4j as a tool to analyze ruby code.

using ruby for almost a decade, i have a lot of experience with effectively finding my way around ruby code. still, ruby programs can be very dynamic and thus tools are always welcome.

as i’ve begun to use neo4j, i’ve been inspired by code analysis tools such as joern and jqassistant as well as aaron patterson’s heap-analyzer . in that spirit, i’d like to announce a new project called neolytics .

neolytics is a ruby gem which records the execution of a block of ruby code in a neo4j database. there are three major things which it records:

1. each step of the execution

this is thanks to ruby’s excellent tracepoint class. tracepoint gives a hook into each execution step of ruby code so that we can record line executions, method calls/returns and raising of executions. 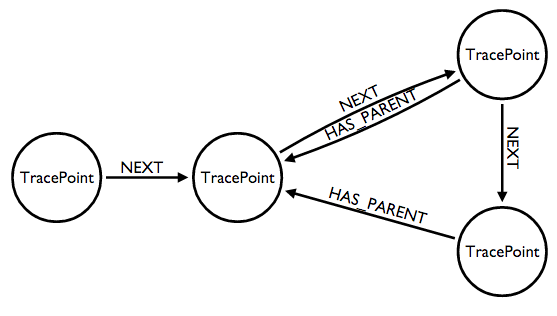 2. objects which are found along the way

for each trace point, neolytics finds:

for each object, the class and module ancestry information is also recursively imported. 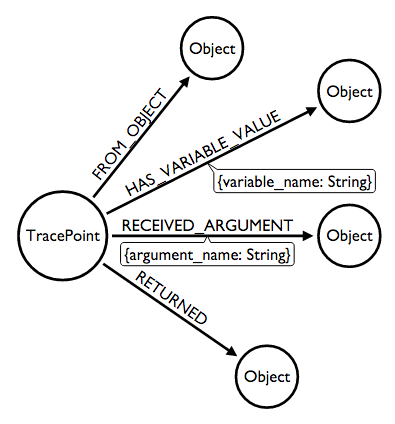 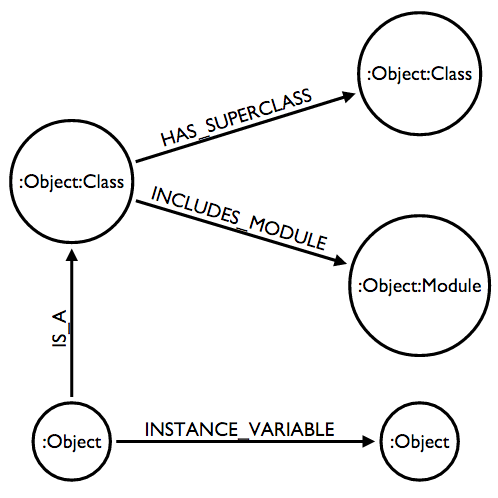 3. abstract syntax trees of all ruby code files involved in the execution

with thanks to the parser gem! additionally, method definitions in the ast are linked to their corresponding tracepoint. 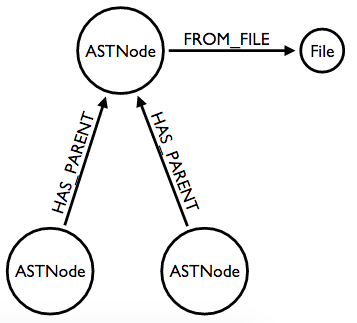 to record the data, i used my neo4apis gem to send data to neo4j efficiently without a lot of round trips to the database.

lastly, i’ve built a ruby_code_analytics rails application to give a ui to examine the results of the dump. you can see an example running on heroku which is a record of the following simple ruby code:

let’s look at some examples of things that you can do with the data from neolytics!

let’s say that we want to know what goes on during the execution of a method. with the following query, we grab the first tracepoint which was a call event and find the entire series of tracepoints until the method is returned from:

in this case, the method is the #plural method from the active_support gem which lets you pluralize strings. you can compare the graph database model with the actual source code here on github .

in the screenshot above, each node is displaying a tracepoint event (i.e. call , line , etc…), the class and method in question and the line number. starting from the node on the left, you can follow the next relationships to see each point in the execution.

note that every node has a has_parent relationship back to the call tracepoint, so we can see that this method didn’t make any further method calls (at least no ruby calls; we see some c_call events which tracepoint doesn’t expose).

lastly, note the started_at relationship from the return event to the call event which is there as a convenience for any query that needs to get both nodes at once (e.g., if you need to get both the arguments and the return value of a method).


for more details, you can see this example tabular output of the tracepoints.

let’s run a query to evaluate the cyclomatic complexity of our methods:

this gives us a straightforward listing of methods, where to find them, and their complexity score, all ordered with the most complex methods at the top:

now let’s extend this complexity metric by using the tracepoint data to see how long each method actually took:

with this, we get a nice table of methods which take the most time, along with their cyclomatic complexity. we can sort by either metric or create a combined metric of our own in order to determine which methods might be ripe for refactoring.

there are many ways to use this data model to debug and otherwise analyze our code. i’ve provided some more sample queries in the readme for the neolytics gem. i’ve also started a list of ideas for new queries which could be made.

these could be used directly or perhaps built into a reporting feature of the ruby_code_analytics rails application. i’m excited to see where things could go!