android studio 0.8.11 was released to the canary channel late last week. here are some of the improvements:

- one fix i’ve heard getting a lot of praise:

the layout editor now checks to make sure that you have the latest available versions of "layoutlib". this is useful because the rendering library is actually shipped with the sdk rather than with android studio, so even if you are staying up to date with android studio canary builds, you can easily use obsolete versions of the layout library. the android l preview rendering library in particular was recently updated, so if you do not have the latest version the ide will check and let you know: 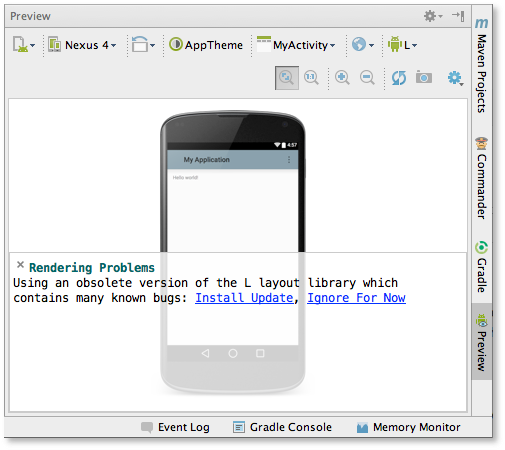 - as always, plenty of bug fixes

if you're just getting started with android studio, check out the downloads page , and then take a look at some of the tips and tricks we've seen for android studio:

stay tuned as we continue to cover android studio’s incremental fixes on its way to version 1.