To do tests on Nebula Graph, we need to frequently deploy it on servers, so we need a tool to improve the efficiency of deployment. The tool needs to meet these major requirements:

About tool selection, there are several options. Fabric and Puppet are veterans and Ansible and SaltStack are rising stars.

The Ansible project on GitHub has earned more than 40 thousand stars. It was acquired by Red Hat in 2015, and its community is very active. A lot of open-source projects adopt Ansible for deployment. For example, kubespray of Kubernetes and tidb-ansible of TiDB. Therefore, we decided to use Ansible to deploy Nebula Graph.

Ansible is an open-source project, but Ansible Tower, an automated deployment tool, is commercial. Ansible has these features:

Some features have obvious advantages and disadvantages:

In summary, Ansible is suitable for batch deployment on a small batch of machines in an agentless manner, and this is right where we are.

Usually, to deploy a cluster offline, the machines are assigned 3 roles:

Control node: Ansible is installed on the control node and manages machines over the SSH protocol.

Managed node: The managed nodes run the services. They can be in an isolated network. The services are deployed by Ansible. 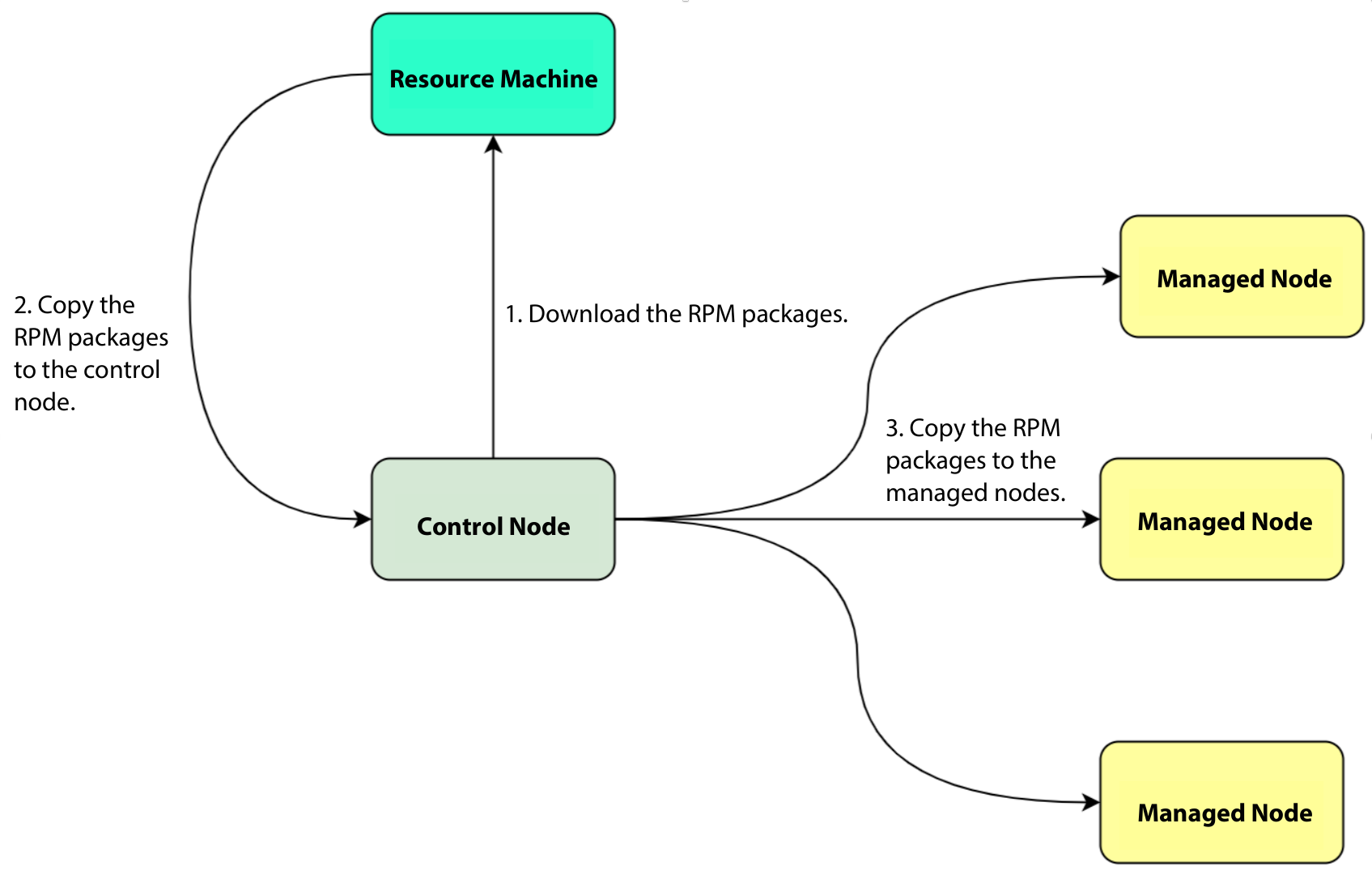 How to Execute Tasks

In Ansible, there are 3 levels of tasks:

Modules are the basic Ansible task units. There are two types of modules: CoreModule and CustomerModule.

A task is executed as follows: 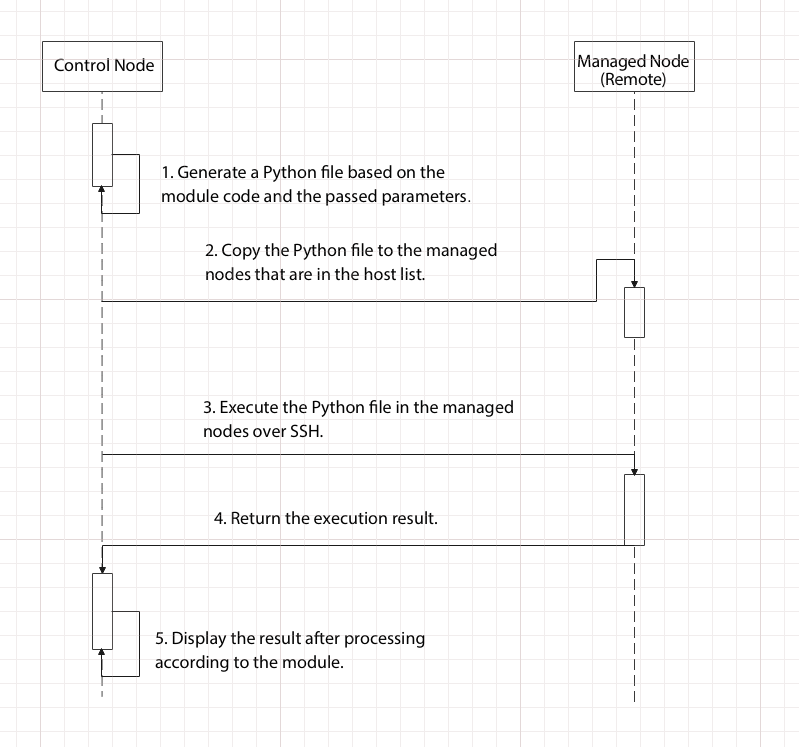 The debug information is returned as above. The file named AnsiballZ_ping.pyis the Python file generated based on the module. We can run this file on the managed node to do a check of the file.

The result is the standard output of a Python file and Ansible processes the result additionally.

A role contains a series of tasks defined in modules. It uses a register to pass context parameters.

Here is a typical example:

A playbook bridges the managed nodes and the roles.

Ansible can use inventories to group remote machines (managed nodes) and use different roles to perform deployment on the machines of different groups. The installation and deployment tasks can be completed flexibly.

After a playbook is defined, if we need to adapt the deployment to different environments, only changes to the machine configuration in the inventory are necessary.

Ansible uses Jinja2 as the template engine. Filter of Jinja2 can be used.

In an Ansible playbook project, create a new directory namedfilter_pluginsand then a Python file namedmap_format.pyin it. Copy the following content to the.pyfile.

A custom module needs to be compliant with the Ansible framework, including obtaining parameters, standard returns, and error returns. After customization, we need to configureANSIBLE_LIBRARYinansible.cfgto enable Ansible to obtain the custom module. For more information, see https://ansible-docs.readthedocs.io/zh/stable-2.0/rst/developing_modules.html.

The Practice of Ansible on Nebula Graph

The startup of Nebula Graph is not complicated, so it is very simple to use Ansible to deploy a Nebula Graph cluster.

Nebula Graph has three process types: nebula-graphd, nebula-metad, and nebula-storaged. They can be named and started in the same manner, so the common role can be applied to these processes.

When a Nebula Graph cluster is deployed in this way, you cannot runnebula.service start allto start it, because some machines do not have thenebula-graphd.conffile. Similarly, we can use parameters in a playbook to define machine groups and to pass the parameters.

It works like running the startup script over SSH multiple times. The execution efficiency is not as high asstart all, but the services can be started and stopped more flexibly.

However, in the role, the value for the double confirmation will be verified.

The playbook will be executed as shown in the following figure. In the double confirmation step, if no 'yes' is input, the playbook will be aborted, which will delete the binary files only but not the data of the Nebula Graph cluster. 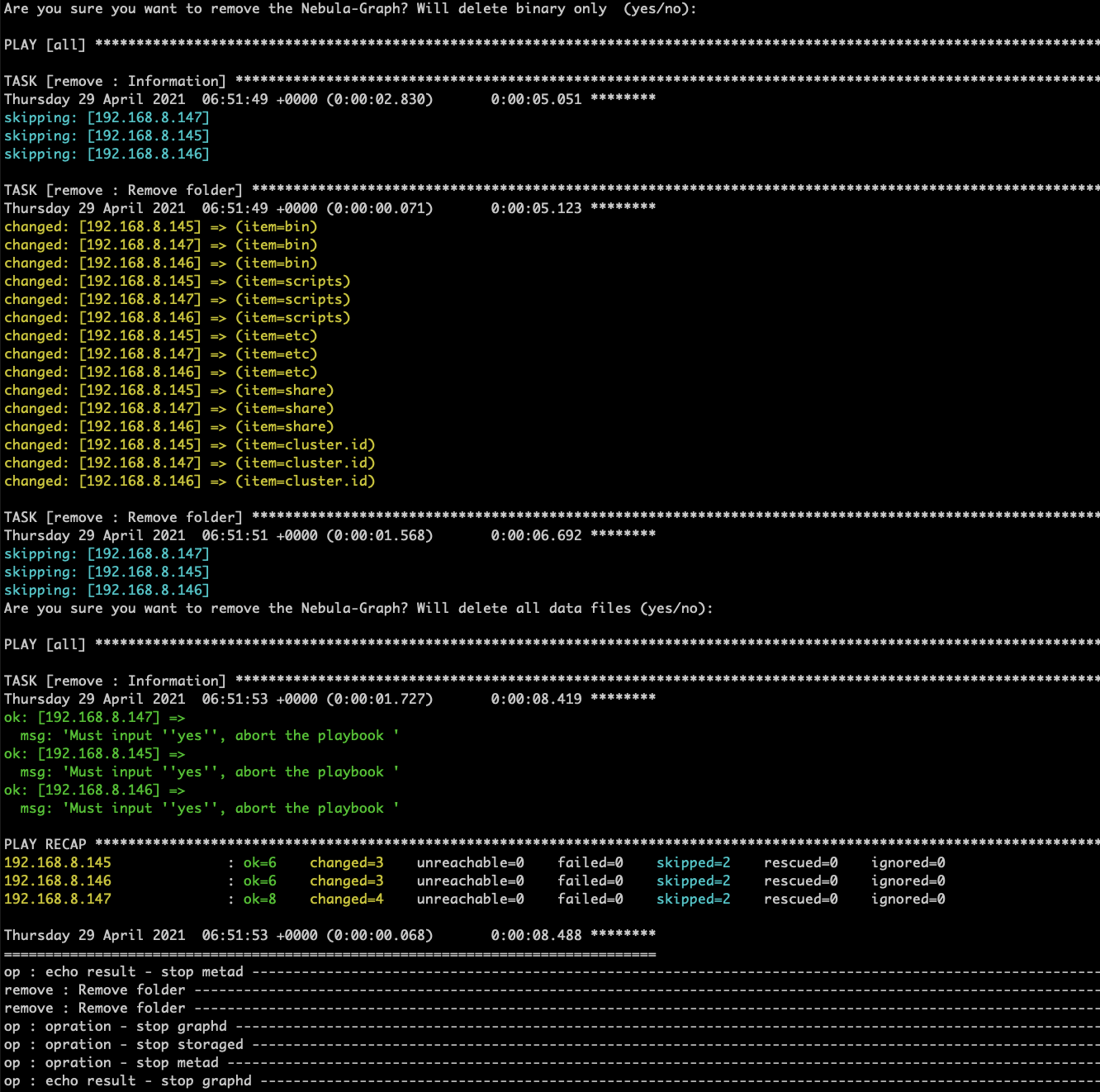 Published at DZone with permission of Harris Chu. See the original article here.