Apache Kafka and Apache Mesos are very well-known and successful Apache projects. A lot has happened in these projects since Confluent's last blog post on the topic in July 2015.

This blog post discusses how to build a highly scalable, mission-critical microservice infrastructure with Apache Kafka, its Streams API, and Apache Mesos respectively in their vendor-supported platforms from Confluent and Mesosphere.

The microservices paradigm establishes many benefits like autonomous teams and agile, flexible development and deployment of business logic. However, a microservice architecture also creates many new challenges, like increased communication between distributed instances, the need for orchestration, new failover requirements, and resilient design patterns.

Confluent for Microservices is a great resource for getting started if you want to learn more about how the Apache Kafka ecosystem can help you in building a scalable, mission-critical microservice architecture. A short summary can be found in the five-minute video, Microservices Explained by Confluent.

Hint: We talk a lot about the sometimes misleading buzzword "microservices." This does not mean that you could or should only build very small services. There are always trade-offs between small services and bigger applications. Size your application for your requirements and build anything in between a very small, independent microservice and a big monolith. It needs to be as agile and autonomous as you need it to be in your scenario. The following sections mostly use the term 'microservice' even though this can also be a "bigger application."

The next section explains what Apache Mesos is and its relation to Mesosphere and DC/OS.

DC/OS is a Mesosphere-backed framework on top of Apache Mesos. As a datacenter operating system, DC/OS is itself a distributed system, a cluster manager, a container platform, and an operating system. DC/OS has evolved a lot in the past couple of years, and supports new technologies like Docker as its container runtime or Kubernetes as its orchestration framework.

The following sections describe how to leverage Mesos and DC/OS to build highly scalable microservices with the Kafka ecosystem.

Benefits of Kafka and Confluent on DC/OS

DC/OS adds several benefits for the deployment, management, and monitoring of the various components from the Kafka ecosystem:

All Kafka and Confluent infrastructure components are available in DC/OS' catalog. You can start a new Kafka cluster with one click in the web UI or CLI command — or do specific configuration to customize the setup and cluster size for your project requirements. Other components from the Kafka ecosystem like Kafka Connect, Confluent REST Proxy, Confluent Schema Registry, or Confluent Control Center can be set up the same way. 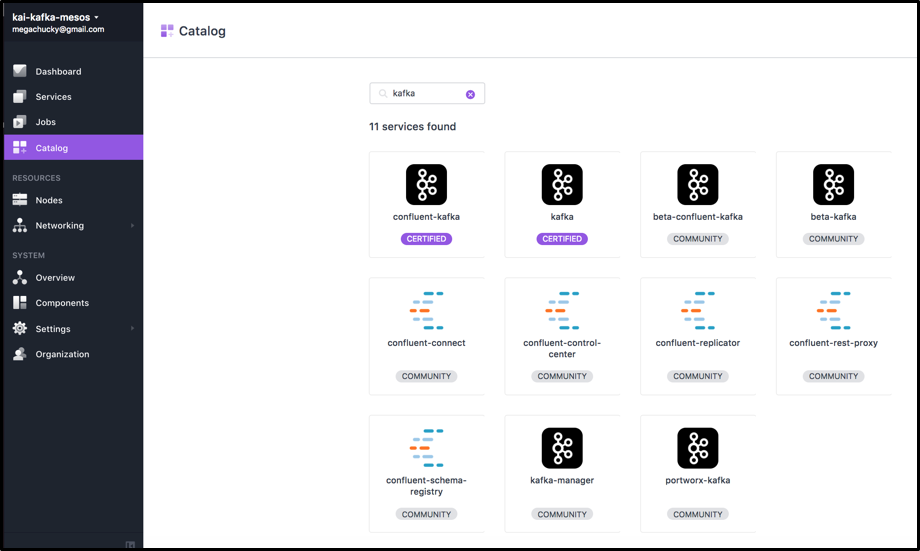 DC/OS provides you with one static "Kafka VIP connection URL." Even if your dynamic cluster setup changes over time because of scaling up, scaling down, failures, or rolling upgrades, you do not need to change the bootstrap address of any Kafka clients.

Hint: Apache Mesos and Apache Kafka both rely on Apache ZooKeeper as a distributed coordination service. By default, new Mesos services like a Kafka cluster use the built-in ZooKeeper provided by Mesos master nodes. However, separated ZooKeeper clusters are recommended in large deployments. The following shows Exhibitor (a management UI for ZooKeeper) used by Mesos by default. It includes configuration for DC/OS and Kafka brokers: 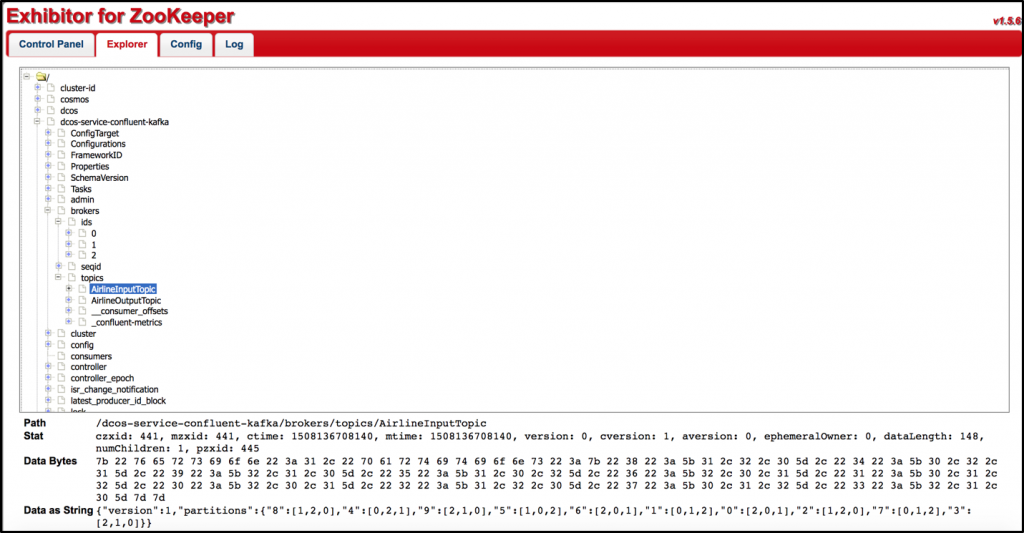 After the Kafka cluster and other optional components like the Confluent Schema Registry are set up and run, you can deploy your Kafka Streams microservices.

The Kafka Streams API is a JAR dependency added to a conventional Java application. Therefore, it can be added to any JVM application or microservice to build lightweight but scalable and mission-critical stream processing logic — no need for a separate big data cluster like Hadoop or Spark. Kafka Streams can run as standalone applications, within a larger web application, or even in a legacy monolith. The application package is deployed to DC/OS via its container runtime (either Mesos runtime or Docker engine) and managed by a Marathon scheduler: 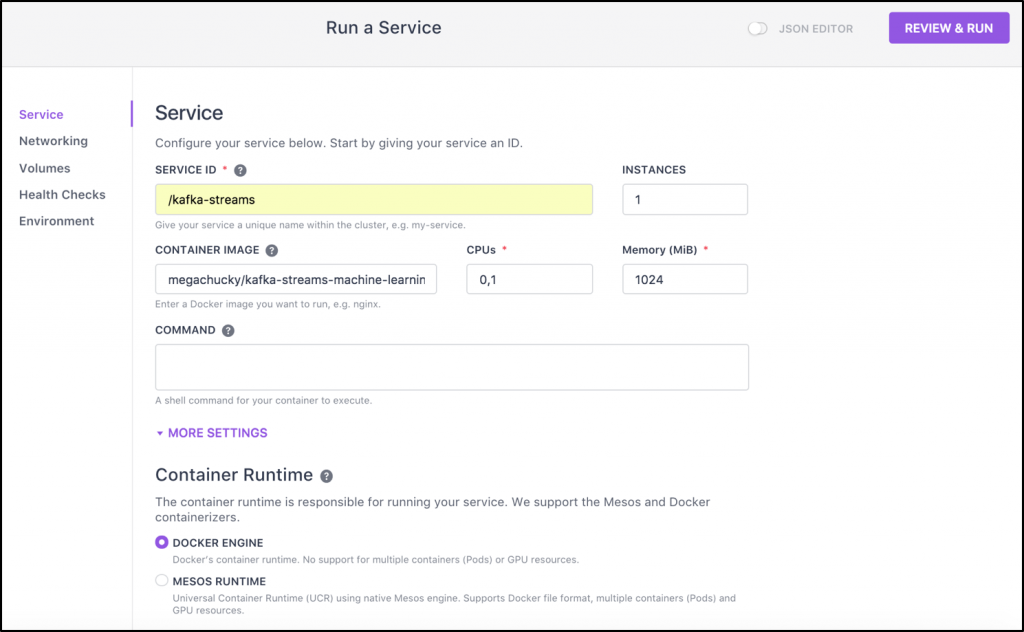 DC/OS supports Kubernetes in the meantime. Therefore, you could run Kafka brokers natively on Mesos while your Kafka Streams microservices are deployed and managed by Kubernetes.

You can scale the microservice up and down manually, via scripting and thresholds or by using Marathon's autoscaling add-on. Kafka Streams automatically balances the incoming messages from Kafka topics to all existing instances (by default via round-robin). If an instance fails, Kafka Streams automatically moves the load to the other instances without any data loss. This allows to build highly scalable and mission-critical microservices. With the introduction of Exactly-Once-Semantics (EOS) in Kafka 0.11, you can also build transactional business logic without much hassle.

Everything described above is also true for KSQL, Confluent's open-source SQL streaming engine for Apache Kafka. Under the hood, a KSQL engine also uses Kafka Streams. Therefore, you can run and scale it via Docker, Kubernetes or DC/OS the same way as a Kafka Streams microservice.

Hint: If you want to deploy and test your own Kafka Streams microservices on DC/OS, please be aware that Mesosphere's Kafka Client (which is used in most examples and tutorials on the web) is no longer maintained and was last updated two years ago. It does not support Kafka's Streams API, as it uses Kafka version 0.9. Kafka is backwards-compatible between brokers and clients, but Kafka Streams messages require timestamps. Thus, you need a newer Kafka Client. I created a Docker image using the same Dockerfile, but replacing Kafka 0.9 with version 0.11. Note that you can use any other Kafka Client, including Confluent's Docker image. If you do not want to worry about security (e.g. firewalls and open ports), but just play around, you can start the Kafka Client within DC/OS environment using the command dcos node ssh -master-proxy -leader to connect and then run your Kafka Client (e.g. docker run -it confluentinc/cp-kafka).

The following 15-min. screencast shows how to deploy, manage, and scale Kafka brokers and Kafka Streams microservices on a DC/OS cluster:

Want to try this out with your own Kafka Streams microservices? Get started with the following resources: