This article focuses on Spark MLlib library, which provides an API for implementing machine learning and statistical computing algorithms. We will discuss an example where predicting emergency department (ED) deaths due to heart disease is formulated as a binary classification problem. We will try to solve that problem using an artificial neural network (ANN) implemented with Spark MLlib Java API.

In the next section we will explain the problem and express it as a binary classification problem. Then, we will describe how to utilize an ANN to solve that problem. We will also mention various performance metrics to measure correctness of the outcome. Next, we will discuss our approach to select the ANN that solves the problem. We will then give a review of the Java code and finally discuss the findings.

The National Center for Health Statistics, part of the U.S. Department of Health and Human Services, regularly publishes results of National Hospital Ambulatory Medical Care Survey (NHAMCS), which includes patient statistics from hospital EDs. We will try to predict patient deaths during ED visits due to heart disease based on various patient characteristics such as age, basic vital measurements and presence of myocardial infarction, i.e. heart attack.

This can be formulated as a binary classification problem where for a set of input variables there are only two outcomes (hence called binary): either a patient survives or dies in the hospital. Each of those outcomes is a class. Each class is uniquely identified by a label, as summarized below.

Each input variable is called a feature. For the problem considered here, features are explained below.

We used NHAMCS Emergency Department public use micro-data files for years 2010, 2011 and 2012, which can be obtained from the official download site. Those are fixed length ASCII files where each row belongs to a unique patient. The features mentioned above correspond to fixed positions in the data file. We enhanced age recode by adding one more age group for patients who are older than 95. (In the original definition of age recode, group 6 covers all patients who are 85 or older.) We eliminated patients who were dead on arrival to ED. In the data file for every patient up to 3 diagnoses are recorded. Because we consider only those patients who have visited the ED due to a heart problem, we required that at least one of the diagnoses have ICD9 code between 410 - 414. (Those codes and their extensions cover all the diagnoses for coronary artery disease.)  Otherwise, we discarded the patient record. The final data file had 915 patients (rows) where 888 survived (class 0) whereas 27 died (class 1).

An artificial neural network is a mathematical model with a variety of applications in science and technology. In particular, ANNs can be used to solve the classification problem introduced above. Different types of ANNs exist. Multilayer Perceptron is a particular type of ANN. Spark MLlib library provides an API for a classifier called Multilayer Perceptron Classifier (MLPC) built on Multilayer Perceptron. A schematic representation of an MLPC consisting of multiple inputs and a single output, which will be used in our example, is shown below. 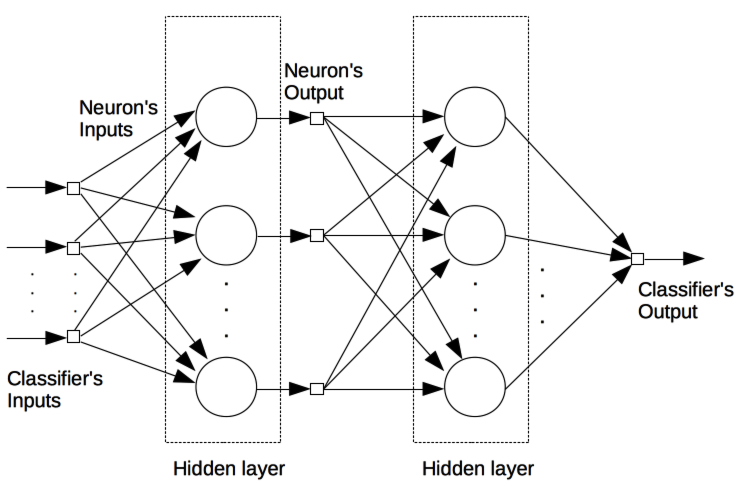 Figure 1. Schematic representation of an MLPC. Classifier's inputs correspond to features and its output corresponds to labels.

Many studies exist for applying ANNs to medical science for diagnostic and prognostic purposes, e.g. stroke diagnosis, and lung cancer detection. In addition to medical science, ANNs have many other application areas such as general decision making functions.

After a model is trained, we should be able to measure its performance quantitatively against test data, which is separate from the training data. Then, among different models we select the one that has the best performance against test data. Below we discuss confusion matrix and precision and recall as the performance metrics.

In binary classification, confusion matrix is a 2x2 matrix where each entry of the matrix is a nonnegative integer. Rows 1 and 2 represent the labels 0 and 1, respectively. Columns 1 and 2 represent the predicted labels 0 and 1, respectively. In a particular row, the total of numbers across columns is the number of instances of the particular label in the data set. In a particular column, the total of numbers across rows is the number of times the particular label was predicted by the model. As an example, consider the below confusion matrix.

Both precision and recall are numbers between 0 and 1. As they both approach 1, the model becomes more successful; as either of them approaches 0, the model becomes less successful. In the most ideal case when the model perfectly predicts each label the confusion matrix has 0 in non-diagonal entries.

In this section, we summarize our approach to obtain the best mathematical model comprising the MLPC. 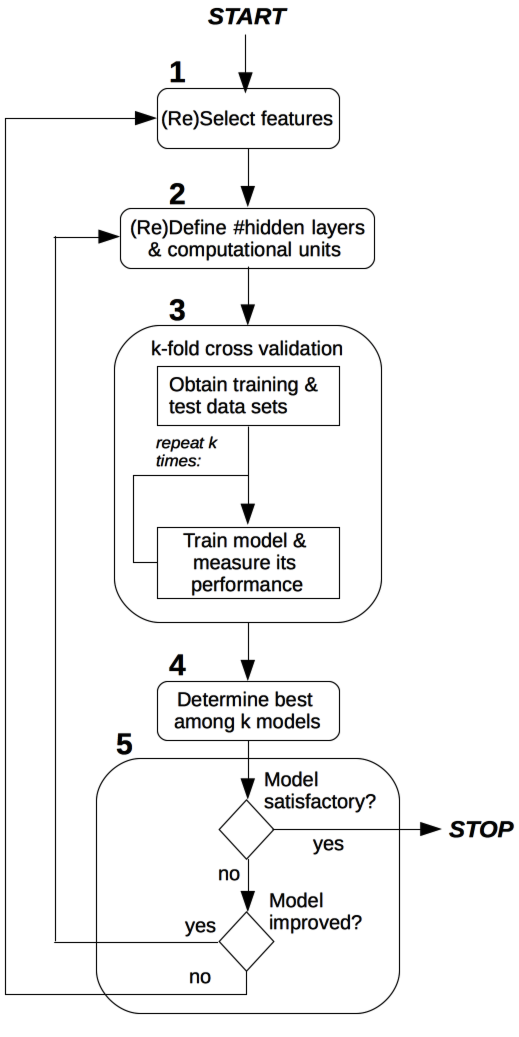 An NHAMCS data file has more than 500 data items including patient demographics, vital measurements, diagnoses, chronic conditions, family history, and statistics about the particular hospital visited by the patient. After eliminating most of those data items based on domain knowledge, we initially identified a set of candidate features and generated a data file in LIBSVM format. This is a commonly used format in machine learning applications.

We started with a simple model with 2 hidden layers with 5 computational units in each layer. We applied k-fold cross validation with k = 10 to obtain 10 pairs of training and test data sets. Performance metrics did not indicate successful results for any of the models. In particular, models failed to predict dead patients, i.e. recall for label 1 was very close to 0.

We then went back to step 3 to increase model complexity and added more computational units and also added one more hidden layer. When results were still not successful, we concluded that our feature selections were inadequte. We went back to step 1 to review the set of features for possible simplification. (While solving classification problems using ANN, irrelevant features i.e. redundant data could result in poor predictive and computational performance as discussed by O’ Dea et. al..) We removed some features in step 1 and cycled through steps 2 - 5 again to finalize the feature set in Table 2 above and obtained an ANN with 2 hidden layers consisting of 28 and 25 computational units.

Our demo application to illustrate how to use Spark API for MLPC (i.e. the classifier based on ANN) starts as follows:

The helper program kRun starts with preparing the data structures for training and test. Then, structure of the MLPC is defined.

We then define the trainer and obtain the trained model.

At this point, we have obtained our model. Next, we will apply test data to model and obtain the performance metrics for test data. This completes the kRun method.

Let us now review the helper method displayConfusionMatrix that calculates and displays the performance metrics. That method starts with various variable definitions.

The output from transform method is so that each row corresponds to a particular test data row where the 1st and 2nd columns correspond to the actual label and its predicted value, respectively. We iterate through all the rows and increment the corresponding variable.

Finally display the confusion matrix and calculate precision and recall for label 0 and 1.

We’ve run the above code in a Spark server with a single-node Hadoop installation, version 2.7.1 with Spark API version 1.6.1, which was latest at the time of writing the article. Complete Java code can be downloaded from https://github.com/kunyelio/Spark-MLPC.

Let us first show the confusion matrix, precision and recall for test data of a model that has two hidden layers each consisting of 5 computational units.

Although model has reasonable performance for class 0 (patients survived), it performed poorly for class 1 (patients died).

Next, let us show the confusion matrix, precision and recall for test data of the most successful model. It has two hidden layers consisting of 28, 25 computational units, respectively.

The model achieves perfect performance, predicting all labels correctly. We observe that performance has improved by increasing number of computational units.

In this article we used an artificial neural network (ANN) from Spark machine learning library as a classifier to predict emergency department deaths due to heart disease. We discussed a high-level process for feature selection, choosing number of hidden layers of the network and number of computational units. Based on that process, we found a model that achieved very good performance on test data. We observed that Spark MLlib API is simple and easy to use for training the classifier and calculating its performance metrics. In reference to Hastie et. al, we have some final comments.