In a typical data stream processing scenario (see Figure 1) streams of data flowing from external sensors are collected at a message queue. These messages are then fetched by the data stream processor and the data gets processed by a set of continuous queries in real-time. The operations they do are mostly in-memory processing such as filtering, aggregation, projection, etc. which could leverage an ephemeral store such as Random Access memory (RAM). Occasionally the stream processing applications may have to deal with data stored in secondary storage or databases (i.e., permanent store).

Recently, several notable open source stream processors have appeared targeting different application scenarios. Apache Storm has been one of the leaders in distributed event stream processors and it created a significant impact on the industry due to its heavy use by well-known companies such as Yahoo!, Twitter, Weather Channel, Spotify, and Rocket Fuel [1][2]. WSO2 Stream Processor is an open source, scalable, and feature-rich stream processing platform from WSO2. It has been used by hundreds of enterprises worldwide, including many famous organizations such as Uber, Transport For London (TFL), Experian, United Airlines, etc.

Understanding the basics on which the stream processing system has been developed is essential to clearly identify their capabilities. In this section, we provide a brief description of the system architectures of Apache Storm 1.1.x and WSO2 Stream processor.

Storm is a distributed computation system which supports real-time processing of large-scale streaming data. It was initially developed at Twitter and was converted as an Apache incubator project later on. The architecture of Storm is shown in Figure 2 which consists of two types of nodes called master nodes and worker nodes. The master node runs a daemon called Nimbus which is responsible for task assignment, code distribution, and fault monitoring. Stream processing applications in Storm are represented as graphs of computation (see Figure 3). A Storm application is called Topology. It consists of at least one input component called Spout which receives data from external streaming data sources. Furthermore, a topology may include at least one processing component called Bolt. The Topology is created by grouping multiple bolts into a data flow graph as shown in Figure 3.

Figure 3: Anatomy of a stream processing application developed with Storm

WSO2 Stream Processor (WSO2 SP) is an open source, scalable, and feature-rich stream processing platform from WSO2. It can ingest data from Kafka, HTTP requests, message brokers and you can query data stream using a “Streaming SQL” language. With just two commodity servers it can provide high availability and can handle 100K+ TPS throughput. It can scale up to millions of TPS on top of Kafka. The architecture of WSO2  Stream Processor is shown in Figure 4. 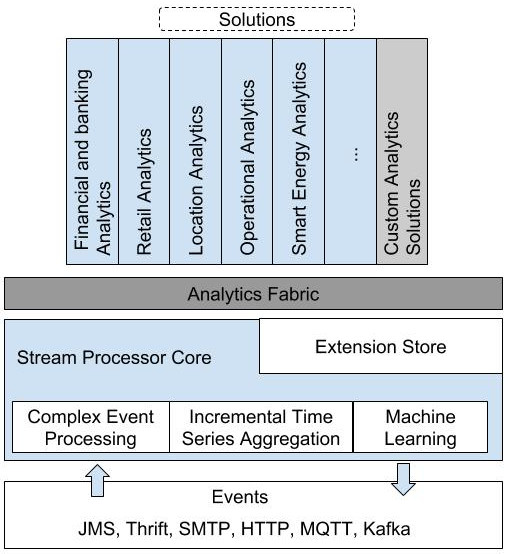 How a typical stream processing application has been developed for WSO2 Stream Processor is shown in Figure 5. It receives input from external parties via event receivers. The received events are added to an event stream and gets processed.  These data streams are processed by the Siddhi engine which generates useful results. The results get published to the external parties via an Event Publisher.

3. Selection of the Dimensions to Compare

When comparing two stream processors, multiple aspects need to be taken into consideration. These aspects can be related to either Quality of Service Features, System Characteristics, or Stream Processing Use Case support. Table I provides a summary comparison between the two stream processors.

Table I: Comparison between Storm 1.1.x and Stream Processor

That's all for Part 1. Tune back in tomorrow when we'll cover to which use cases these technologies best apply.