This week, we have a detailed write-up on finding credit card numbers leaking from a GraphQL API, a lab walkthrough on hacking JSON web tokens (JWT) through SQL injection, and HackerOne’s new Capture The Flag (CFT) API Security challenge. On the resource side, we have another good mind map, this time on XML attack vectors on APIs.

Craig Hays has published a fascinating write-up from his recent pentesting in a private bug bounty program.

The application used a GraphQL API under the hood. Hays found the ‘about me’ call that was susceptible to Broken Object-Level Authorization (BOLA) attacks. He could call that endpoint to enumerate each user in the system and retrieve their profile information.

He found that the API exposed much too much data on each user and even returned stored credit cards on file. The credit card numbers were encrypted. However, Hays noticed that the encryption was 2-way and unsalted, meaning that supplying a specific credit card number to save would always return the same, specific encrypted version of the number.

As Hays notes in his write-up, the main lesson learned here is again to tightly lock down your API responses and avoid exposing any more data than strictly necessary. Other things to consider:

JWTs are one of the most frequently used methods to pass caller information in authentication tokens of REST API calls. When JWTs retrieve signing keys from a database using the keyID (kid) header, this itself can become a SQL injection attack vector.

If the API implementation blindly uses kid to retrieve the key from a database, attackers can pass a SQL injection such as “non-existent-index’ UNION SELECT ‘ATTACKER’; --“. Unsanitized SQL request like this will produce “ATTACKER” as the retrieved value. Thus, API would now be verifying JWT signature with the value that the attacker supplied – making it possible for the attacker to forge any tokens they like.

For those too busy to try this themselves, there is a step-by-step walkthrough on how the lab and the attack progresses, but you can also just read the intro for the task description and try to figure it out yourself with the lab.

If you need an overview of JWT and possible JWT attacks, see the recording from my JWT security talk at AppSec California 2020. Isabelle Mauny and I also did a webinar on the approach to externalize JWT security checks.

CTF challenges are fun security quests and a great way to test your penetration testing skills in action.

HackerOne has just released a new “RTFM”-level CTF by Adam Langley, specifically dedicated to API security. If you are looking for a fun way to hone your skills, check it out.

APIs that accept XML payloads can be exposed to various XML-related attacks if they do not properly define and validate these payloads.

Harsh Bothra has put together a mind map of possible XML attack vectors, both as a XMind map and a PDF. Many of the attack vectors also provide reference links to further reading. 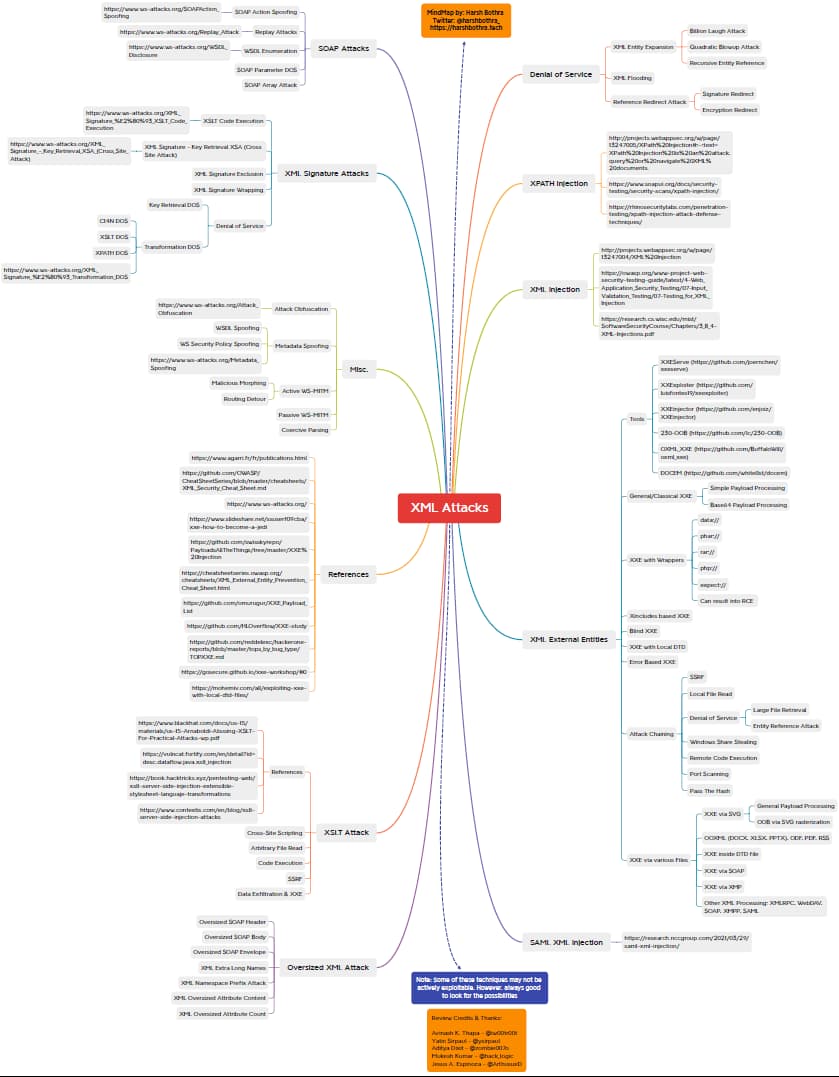