This week, we take a look at the recently discovered (and fixed) API vulnerabilities in electric car charging stations, a Udemy course on OAuth 2.0, the recently released Gartner Hype Cycle on APIs, and how APIs in microservices architectures can be exploited if they construct backend calls without properly validating inputs.

The chargers are typically controlled through a cloud platform and a mobile app, and hence have APIs that can be accessed remotely and can be vulnerable.

The potential exploits that Pen Test Partners found were threefold:

Here are some API vulnerabilities that they found:

All vendors have since fixed the vulnerabilities, but the magnitude of what could potentially have been achieved through them is quite chilling here.

Training: The Nuts and Bolts of OAuth 2.0

Learn OAuth from one of its creators! Aaron Parecki has released his “The Nuts and Bolts of OAuth 2.0” class on Udemy that covers:

No programming knowledge is needed. Here’s a 5-minute intro video:

Gartner Hype Cycles offer nice visual representations of where the technologies are in terms of their hype, maturity, and adoption.

Mark O’Neill and John Santoro have just released their “Hype Cycle for APIs and Business Ecosystems, 2021” report. As the chart below shows, API security testing is sharply on the rise (as are Graph APIs), API threat protection is still near the top but further along the maturity route.

See the full report (behind a paywall) for more details on the technologies mentioned. 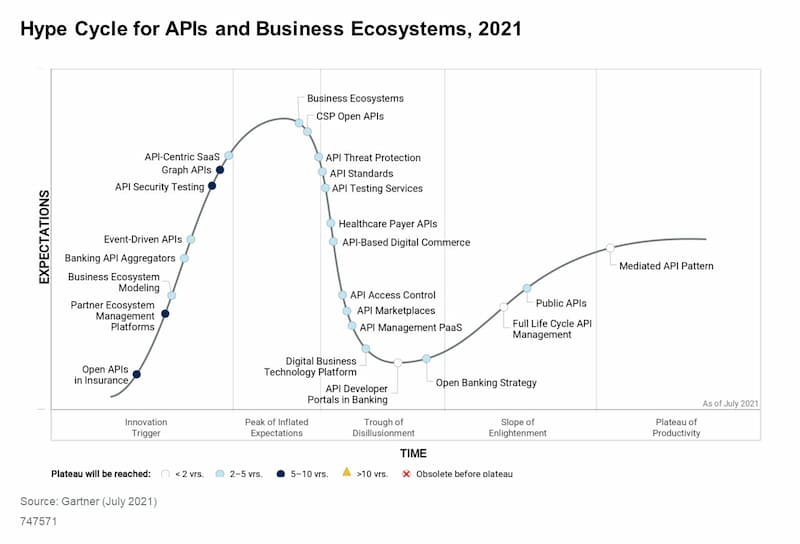 Video: Traversing My Way in the Internal Network

For example, a call to api/v1/user?id=1337 might mean that this microservice is making its call to some_internal_domain/users/1337.

That backend likely blindly trusts the frontend microservice, and if there is no data validation in place, an attacker may be able to get to other parts of the system by manipulating the parameters in the API call. For example, calling api/v1/user?id=1337/../../ might get translated to some_internal_domain/users/1337/../../ and thus normalized to some_internal_domain/, getting to the root of the backend.

Watch this recording of a talk by Jasmin Landry at a recent OWASP event in which he covers the traversal attacks that can come out of microservices architecture. He discusses various variants of potentially dangerous API inputs (query parameters, path parameters, JSON payloads), as well as his real-life experience in finding and reporting such vulnerabilities:

Lessons learned from this one: