This week, we check how Tinder’s API vulnerability has developed a life of its own, the latest statistics from Akamai on API security, the best current practices for JWT, and why API security needs both API firewalls and API management, not just either-or.

Back in July 2019, we covered the OWASP API3:2019 — Excessive data exposure vulnerability in Tinder APIs. The premium features, such as unblurred images of those who like you, were not enforced on API-level. Thus, a suitable crafted request to the API could by-pass these restrictions.

Now, there’s a Reddit page with simple instructions and both Chrome and Firefox have extensions that exploit this flaw: 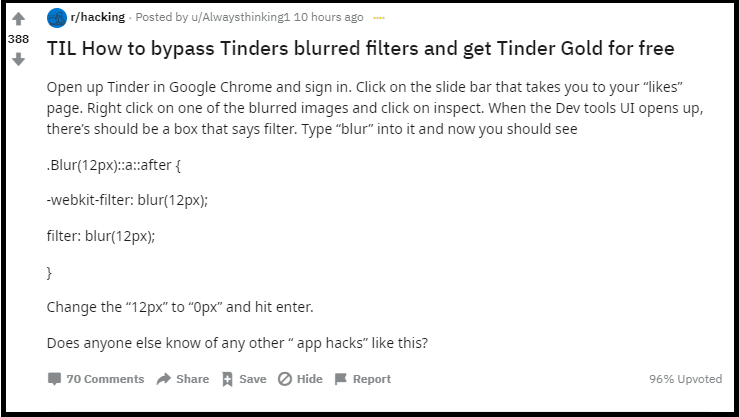 Your APIs are your interface. If there is information that you do not want to expose to users, do not expose it in APIs. It does not take long these days until someone figures out the data that you return or even makes it widely accessible — like in this case.

Akamai’s has published its “2020 State of the Internet/Security: Financial Services” report, and it includes some very interesting statistics:

(Quotes are from Akamai’s press release.)

Another clear example on how the predictions on the increased importance of API security are coming true. According to Gartner, by 2022 APIs will become the most common attack vector.

“JSON Web Tokens, also known as JWT are URL-safe JSON-based security tokens that contain a set of claims that can be signed and/or encrypted. JWTs are being widely used and deployed as a simple security token format in numerous protocols and applications, both in the area of digital identity and in other application areas. This Best Current Practices document updates RFC 7519 to provide actionable guidance leading to secure implementation and deployment of JWTs.”

If you prefer watching a video to reading an RFC, check out the 3 recordings that we featured in our previous issue.

Runtime API protection can be done with both API gateways and API firewalls.

As always in the industry, the terminology can be confusing and the lines can get blurry. Check out Isabelle Mauny’s (42Crunch) take on the two and why both have their place.