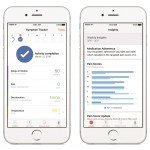 Last year I talked about the launch of Apple’s ResearchKit, which was (is) an open source platform that was designed to make it easier for scientific researchers to develop apps for the iPhone and iPad.

Based upon the initial success of the ResearchKit, Apple have now launched a new framework, called CareKit, which is designed to help developers build apps to help people manage their own medical conditions.

“We’re thrilled with the profound impact ResearchKit has already had on the pace and scale of conducting medical research, and have realized that many of the same principles could help with individual care,” Apple say. “We believe that giving individuals the tools to understand what is happening with their health is incredibly powerful, and apps designed using CareKit make this a reality by empowering people to take a more active role in their care.”

The platform will feature four modules that have already been designed by Apple:

“With ResearchKit, we quickly realized the power of mobile apps for running inexpensive, high-quality clinical studies with unprecedented reach,” the team say. “We hope that CareKit will help us close the gap between our research findings and how we care for our Parkinson’s patients day-to-day. It’s opening up a whole new opportunity for the democratization of research and medicine.”

It’s a fascinating platform and hopefully there will be further developments that build upon this initial success.  It’s clear that Apple have ambitions to disrupt healthcare in a significant way, and they have come a long way in the two years since their health strategy began to take shape.

Check out the video below for more information on the platform.