There is no simple answer to this question. It depends on a number of factors and circumstances that may influence the final decision.

Even if your budget allows you to build a native app for every existing platform, we still recommend considering several factors beforehand.

First of all, developing for multiple platforms at the same time will cost you more time and money. Especially if your goal is to simply acquire your first customers.

Most customers are used to just one specific platform, therefore, it makes no sense to wait for your app to be released under multiple platforms in order to get into the market. Also, post release maintenance for two platforms at the same time is much harder. There are always some changes that need to be made or even bugs to be fixed after the first release. Therefore, it’s much cheaper and less time consuming to get them fixed for just one platform.

It’s much easier to start with only one platform. You can create a working prototype, introduce it to the market, attract your first customers, receive their feedback, fix all of the possible problems and only then, after having gained all this invaluable experience and knowledge, can you begin your expedition into the realm of another platform.

In short,It’s more advisable to start with just one platform, but which one? We won’t advocate one platform over another but we will highlight some key factors and let you choose one for yourself.
So let’s sort it out, shall we?

Despite the platform fragmentation and a lot of pain that comes with developing apps (see further below), Android is still the leading champion among mobile operating systems and accounts for more than 86 % of the global market share and this winning trend is likely to persist into the future: 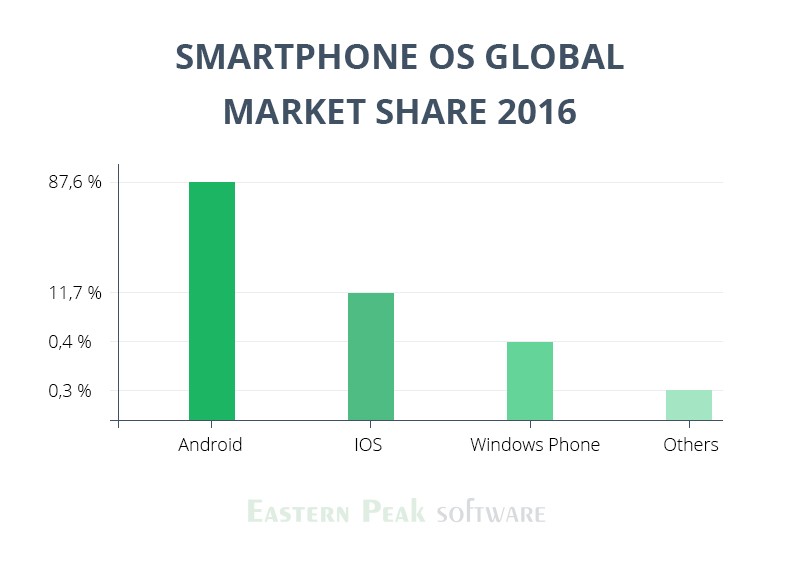 As they say “there’s more to this equation,” so let’s move on.

Who’s going to win the mobile platform war, iOS or Android? As far as future prospects are concerned, there’s no winner. Both platforms are “in good shape” and won’t lose relevance within the next few years or so. So, giving preference to one platform over another, based on the prospects, is not worth it. You won’t lose in either case.

Despite its smaller total market share, there are some regions in the world where Apple dominates the market and has a greater demand for its products (primarily countries with higher standards of living and developed economies): The Americas, Europe, China, Japan and Asia Pacific. According to Statista, North and South America generate almost half of Apple’s revenue, while China and Europe compete for second place. 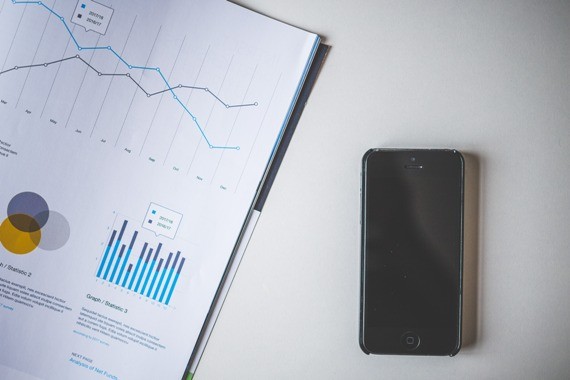 On the other hand, Android leads the way in countries with developing economies (i.e. Asia, Africa, South America). So if you have any particular country or region in mind, take this factor into account.

We won’t get too much into the details on how to identify your target audience, that’s another story for another day. Just knowing the basic demographic and behavioral characteristics of your perfect customer like age, gender, level of income, occupation, education, family status, interests, attitudes, beliefs etc. will be enough. Once you know who you’re after, it will be easier to identify what type of device they prefer.

In the case of the widest possible audience, Android would be a more preferable platform to begin with. In all other cases, if the audience is more specific such as building a mobile app for healthcare, then age, gender, and occupation come into play. Determining the right platform may require a more in-depth analysis of your target audience.

Of course, the cost of building an application depends largely on its type, complexity, and features it will contain. But in general, an iOS app will be launched a lot faster due to the lack of device fragmentation. In fact, it’s the only one operating system that originates from a single manufacturer.

Huge entropy created with an Android device and OS fragmentation (24,000 distinct Android devices from more than 1,200 manufacturers) greatly complicates development and testing for this platform and will take more time and money.

Android is an open source operating system. It gives “more freedom” to developers, and it provides more access to the hardware and the operating system itself, which is not accessible on iOS. iOS also has some file system restrictions. In addition, Android is very friendly in terms of customization.

iOS users generally have a much higher LTV (Lifetime value) than Android users. They are more willing to spend money on their apps. That’s why if you’re creating a paid app, a retail app or an app that will offer in-app purchases.A customer will be able to buy additional content or services within the app.Therefore,It’s better to start with iOS.

There are also ways of generating revenue from a free app: advertising, subscriptions, affiliate income, sponsorships, etc. That’s where a large Android audience can be of value. So if you’re creating a free app and plan on making money via advertising, an Android app would be a better choice to start.

Factor 8 – Launching on the App Store

Google Play Store is more indulgent when it comes to launching an application, whereas App Store has a more strict policy and approval period.

On App Store, the registration process is more formal and you’ll have to pay an annual fee of $99. The evaluation process for your application usually takes about 2 weeks, and there’s always a possibility that it will be rejected. In this case, you’ll have to wait another 2 weeks or even more, so make sure that your app developers have experience in launching apps on the Apple App Store.

And last but not least. Apple users are “locked” into its ecosystem and tend to stay with its products rather than switching to another vendor. It is more often the case that an Android user switches to iPhone and not vice versa. With iOS you are able to target a market that contains half a billion high-end loyal customers whose purchasing power is almost five times greater than Android customers.

Let’s wrap it up. So who’s the winner? We think that there’s no winner. Both Android and iOS have their advantages and disadvantages. Although many factors argue in favor of launching your application first on the iOS platform, it all depends on the app itself.