Support Vector Machines (SVM) are one of the most popular supervised learning methods in Machine Learning(ML). Many researchers have reported superior results compared with older ML techniques.

SVM has been widely used throughout ML, including medical research, face recognition, spam email, document classification, handwriting recognition. In the medical field, SVM has been applied by practitioners in:

A popular classifier for linear applications because SVM’s have yielded excellent generalization performance on many statistical problems with minimal prior knowledge and also when the dimension of the input space(features) is very high.

SVM uses a Kernel trick to transform to a higher nonlinear dimension where an optimal hyperplane can more easily be defined.

A line is considered bad if it passes too close to the points because it will be noise sensitive. The objective is to find the line passing as far as possible from all points – the maximum margin hyperplane 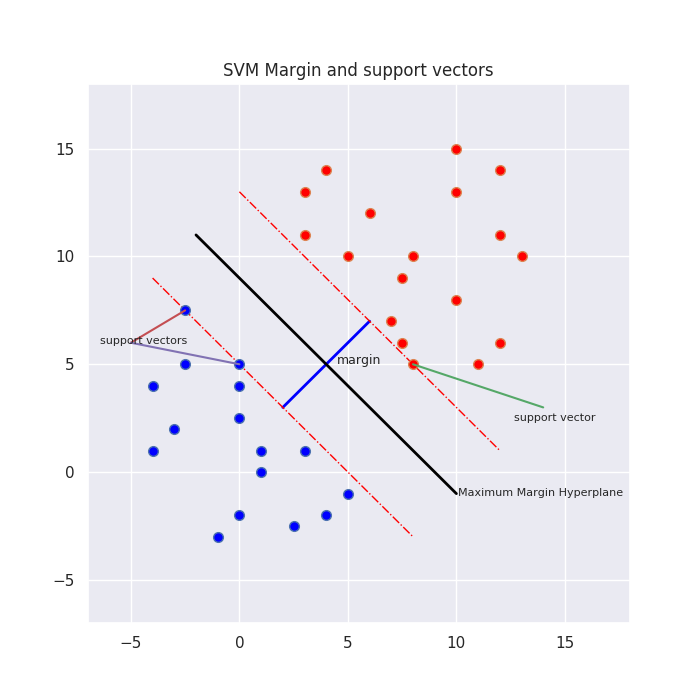 SVM seeks to find those points that lie closest to both the classes. These points are known as support vectors. In the next step, the SVM algorithm seeks to identify the optimal margin between the support vectors and the dividing hyperplane, called the margin. The SVM algorithm seeks to maximize the margin. The optimal hyperplane is the one with the maximum margin.

The main idea behind a kernel function is a transform done to the training data to improve its resemblance to a linearly separable set of data. This transform involves increasing the dimensionality of the data to achieve a separable dataset. There are several kernel functions available, each with its own advantages.

I will describe these kernels and typical applications in a future article.

The Breast Cancer Wisconsin ) dataset included with Python sklearn is a classification dataset, that details measurements for breast cancer recorded by the University of Wisconsin Hospitals. The dataset comprises 569 rows and 31 features. The features are listed below:

This code cancer = datasets.load_breast_cancer() returns a Bunch object which I convert into a dataframe. You can inspect the data with print(df.shape). In the output you will see (569, 31) which means there are 569 rows and 31 columns. Using print(df.head()) lists the first five rows of the dataset.

The cancer dataset is derived from images of tumors recorded by medical staff and labeled as malignant or benign.  The features (columns) of the dataset are listed below:

The model selection section of the scikit-learn library provides the train_test_split() method that enables a seamless division of data into the training data and test data.

Now we have the data divided into the training and test sets we are ready to train the algorithm. scikit-learn contains an SVM library which contains built-in methods for different SVM applications. The first parameter is the kernel type, and I have chosen the linear kernel for this application.

The fit() method of the SVM class is invoked to train the algorithm on the training data output from the train_test_split() method.

Assessing the quality of the Algorithm

The accuracy of the prediction is here assessed using the Confusion Matrix which shows the misclassifications as well as correct classifications achieved by the algorithm.

Here we see that the accuracy achieved using the linear kernel was 94.7%, which is a good accuracy.

As a classification technique, the SVM has a number of  advantages:

Accuracy is often dependent on the kernel method selected for the application. However, many practitioners find the Radial Basis Function (RBF) Kernel provides a robust kernel suitable for many problems.

In applications where the number of features for each class is greater than the number of training data samples, SVM can perform poorly.