A man returned home after walking around the globe for eleven years. The next day, when he told his wife he's going to the corner store, she asked him, "Are you taking the short route or the long one?"

Queries can be executed in many different ways. All paths lead to the same query result. The Query optimizer evaluates the possibilities and selects the efficient plan. Efficiency is measured in latency and throughput, depending on the workload. The cost of Memory, CPU, disk usage is added to the cost of a plan in a cost-based optimizer.

A query optimizer chooses an optimal index and access paths to execute the query. At a very high level, SQL optimizers decide the following before creating the execution tree:

Consider the case of MongoDB restriction." A collection can have at most one text index." https://docs.mongodb.com/manual/core/index-text/#restrictions It documents a few other restrictions along with this. For this article, explaining this one restriction will suffice.

Why Should You Care About This Restriction?

Why Does MongoDB Text Index Is Restricted to One Index per Collection?

MongoDB's query language is simplistic even if it's trying to mimic the SQL operations. Let's see how MongoDB's optimizer handles these.

Essentially, MongoDB's query optimizer only does index selection before creating the execution plan, but it seems to select the indexes in an odd fashion — neither by rule not by statistics.

Even on this simple document structure, MongoDB selects the index on (y) even though there the query has filters on x and y: ({x:{$gt:0}, y:99}).

Back to the original question: Why you can't create multiple text indexes on MongoDB?

Building multiple indexes shouldn't be an issue if they simply allowed it. The real problem is that when you give a text predicate in your query, the MongoDB optimizer unable to choose the right index. It cannot validate these text indexes against the text predicate. MongoDB optimizer doesn't follow a natural logic or a logical framework. Hence the restriction.

And, it could even hurt you! 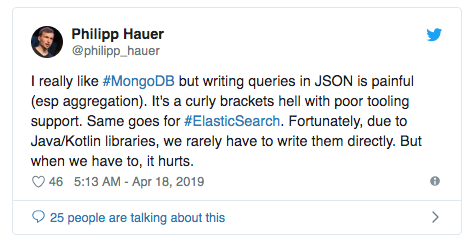 Couchbase N1QL has added text index to N1QL for the upcoming release. See the details here. Users can create any number of text indexes and the optimizer will choose a qualified (sargable) index and use it. It also supports searching during joins, post index scans, etc. because the optimizer understands the search predicate and layers into its decision logic. There's no new API or new plan to manage. That's the power of having Couchbase!