The digital business landscape is helping businesses to grow beyond geographical boundaries. Transforming your business into a digital business is no longer an optional thing, rather it has become a necessity. Early adopters, late boomers, methodical players, every enterprise is trying to modernize its enterprise IT ecosystem to improve the efficiency and become a leader in their respective enterprise domain. If you are an enterprise architect who is responsible for building a digital platform from scratch, modernize an existing IT platform or lift and shift an existing deployment into the cloud, there are hundreds of different software and technology vendors available to support your effort. The days of proprietary software is long gone and people are more and more migrating towards open-source software (OSS). One of the major challenges of adopting OSS is the maintenance overhead. But that challenge is absorbed by the mega-cloud vendors as well as other cloud services offered by the vendors who created these OSS IP.

In this post, I'm going to discuss building a modern digital platform with OSS. Most of the software components I'm using here are free to download and play around. If you really need to build a production-grade system, it is recommended to get commercial support from the respective vendors. The other important aspect of this architecture is that it is vendor-neutral. You can replace any vendor with OSS or proprietary software without impacting the overall architecture. The components are loosely coupled and can deploy and run independently.

The core design principles of this architecture are

Loose coupling between components allows each and individual component to growing themselves without worrying about other components or without distracting the overall system behavior. If the components are coupled together, every change you made will become a change in the dependent component and it can have a riffling effect on the entire system.

Standard interfaces allow you to interact with many different channels without modifying a single line of code. As an example, if you expose your business services through REST/HTTP interface, multiple consumer channels like web, mobile, and partner systems can interact with that pretty easily.

Agile development is about how frequently you are able to release a given feature while maintaining the overall quality of the system. In a typical enterprise, it is taking weeks to months to years to roll out a project which has taken those enterprises back. But with the agile development, new features can be implemented end to end within hours to days and rollout into production systems with high quality.

Resiliency is a key concept in modern enterprise systems because the components are distributed across various hosts and mostly connected over the network. The network can go down or degrade at any given time and that should not put the entire system into a blackout stage. Instead, these intermittent failures need to be absorbed by the components and they should be designed in a manner to withstand those failures.

Open-Source Software (OSS) is becoming the de-facto way of building software systems in the enterprise because of the many advantages it offers over proprietary software. Some of them include:

The reality check though is that not all these factors were possible to adopt in the past because of the technical limitations. But with the emerging OSS solutions, almost all of these design principles can be adopted with proper architecture and design.

It is absolutely not possible to finish an enterprise architecture discussion without mentioning the words "microservices," "containers," and "agility." Because of that fact, and for good reason, the architecture we are going to design adheres to microservices standards and will be deployed in containers with agility at its core. 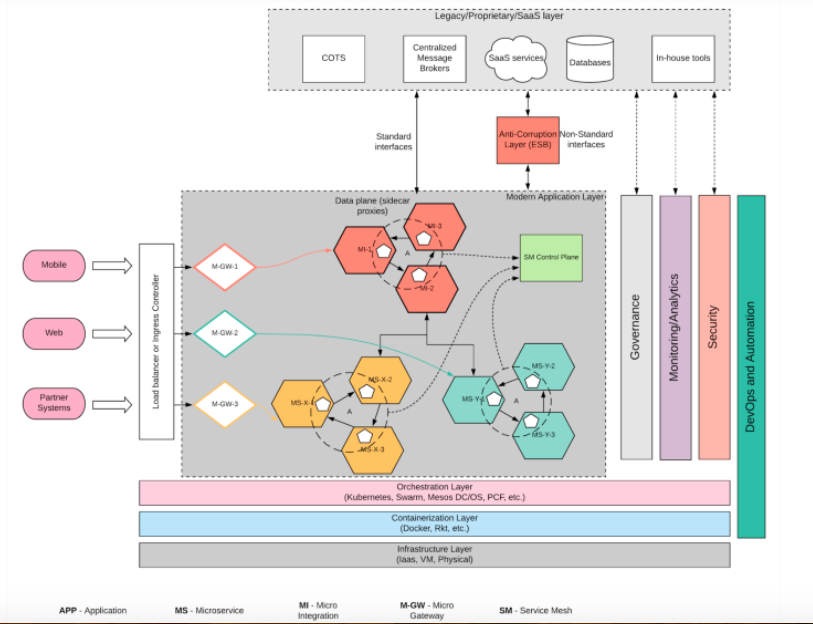 The above architecture diagram captures multiple dimensions. From left to right, it captures the user interaction flow of the architecture along with functional components (modules) within the architecture. All these components are interacting with each other through standard interfaces and removing one component would not black-out the overall system. From top to bottom, it captures the layers of modules and their relative position in terms of deployment. Let's try to understand each layer in detail.

This is the component layer which is already running in your enterprise. You may have installed Commercial Off The Shelf (COTS) systems, Software as a Service (SaaS) solutions, SQL/No-SQL databases, various Message Brokers as well as some other in house tools which you have built. The characteristics of these systems are not fully compatible with the design principles which we need to adhere to. But these systems play an integral part within the enterprise IT system which is not easy to replace. Even though some systems like in house tools can be replaced with new services, the rest of the components will stay for a longer period of time. Instead of trying to replace that layer or re-architect that, we will make sure that these systems interoperate with our modern architecture in a seamless manner. When building interoperability, we can choose 2 options.

This layer can utilize some of the cross-functional capabilities like governance, monitoring/analytics and security.

This is the section of architecture which we build from scratch and will be the layer where most of the modern design principles are applied. The core business services can be implemented as microservices which are capable of

These microservices development can be done with agile practices and through small teams which will work on a given task end to end from designing, implementing to testing.

These set of microservices are more aligned with the requirements of the end-users and their applications. These services sometimes connect to legacy services layer as well through the anti-corruption layer or directly if it is a standard interface.

This API microgateway can run along with each microservice as a sidecar or it can run multiple APIs for a selected set of microservices which are required for a given application or use case.

When building a digital platform with a modern approach like microservices, it is essential to have a proper governing layer due to the number of different technologies used and the amount of autonomy each time posses. As depicted in the above architecture, there can be 100s of different services implemented by autonomous teams with different SLAs, technologies, message formats, etc. Having a central governance platform to keep all the details about these services will be a key when this platform expands with more and more new services. Some of the features expected of the governance layer are mentioned below:

Monitoring and analytics are two separate requirements, which are interconnected. Having proper monitoring on the application layer is essential when adopting a microservices architecture. Most of the early adopters of microservices architecture highlight the importance of monitoring when it comes to management and maintenance of the platform. When something goes wrong within a given service, tracking down the issue (debugging) to a particular microservice will become a tedious task if there is no proper monitoring and tracing in place. Monitoring the platform is two-fold.

Sometimes passive monitoring is not sufficient to become a leader in the respective industry or domain. Analyzing business operations in real-time and taking actions is critical in competing with peers. Analytics capabilities are typically divided into three categories.

Protecting business services is a critical requirement of any digital platform. Data is money. So protecting your data is like protecting your money. There are two main functionalities required out of the security layer.

Protecting microservices and micro-integration services is enforced at the microgateway layer where it can interact with a security provider to validate the user requests. OAuth2 and JWT are two popular technologies used to protect microservices.

Another key aspect of building a modern digital platform is the continuous integration and continuous deployment or CI/CD. It plays a pivotal role in building an agile digital platform, which is capable of doing multiple releases within a day to compete in the market. It allows enterprises to gain the below-mentioned advantages.

Exposing the protected services to the external world can be done with the usage of a load balancer. Even though this becomes a single point of failure, by having multiple instances of the load balancer, users can get rid of that failure. At this layer, additional security measures can be taken to protect malicious users from attacking the system (DOS attacks).

The aforementioned capabilities are key to build the modern application layer with 100s of services running with different workloads and SLAs while utilizing the same set of computing resources.

Container run-time is the core piece of software that made all these modern architectures possible. It provided an efficient mechanism to run multiple workloads on a single computing resource without sacrificing resources to run an entire operating system (guest OS). Container run-time platform hides the complexity of resource allocations within a computer similar to the way an operating system handles it but without needing an OS. It also provides the below-mentioned advantages.

The above architecture is an open architecture that can be implemented with many different technologies for the same component. Let's see how this architecture can be built using a 100 percent open-source software stack.

The below architecture diagram depicts the open-source software that can be used for each and every component. 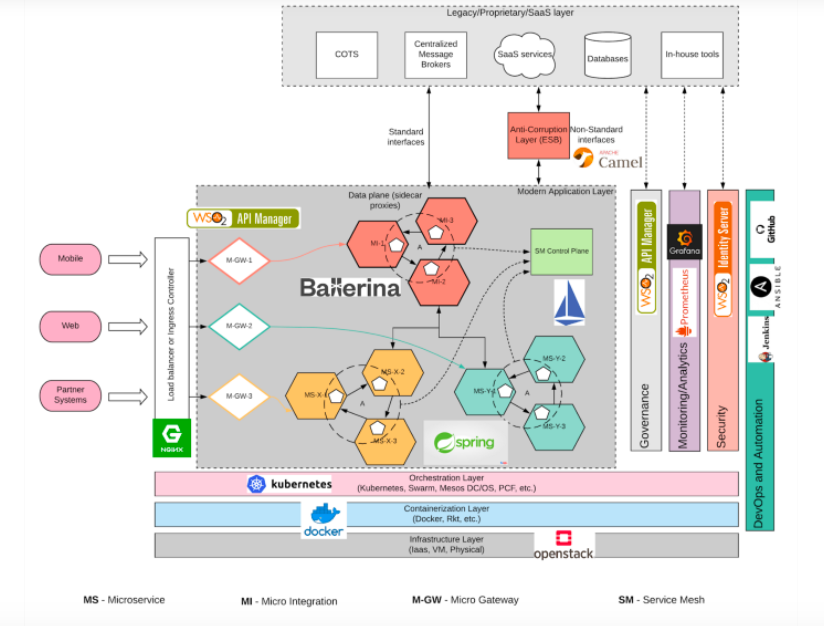 Let's see how each open-source technology is selected for relevant components within the architecture.

The architecture which was initially described is not restricted to the technologies which are mentioned above. There are many open-source software alternatives you can find in the industry that does the exact same thing, so choose wisely from these vendors. Here is a list of alternative OSS vendors.