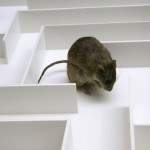 Films like the Matrix popularized the notion that we would one day be able to augment our brains by simply uploading the knowledge or skill we required and instantly become smarter.

We have already seen developments that suggest such instant sharing of knowledge is possible amongst robots, but it remains another thing altogether to expect such instant knowledge to be available to humans.

A recent study suggests that may be about to change however.  The paper, published in PLOS ONE, tested out augmenting the brains of rats with synthetic intelligence.

The research saw a group of rats trained to complete a number of different mazes, with some of the rats ‘augmented’ with a number of microelectrodes in their cortex.

The implants were designed to tinker with the release of dopamine and therefore influence the reward mechanism in the brain.  This system was manipulated to try and stimulate the rates into solving the maze faster.

The rats were then compared to the puzzle solving capabilities of a machine.  The researchers developed a specific maze solving computer that used a number of heuristics to try and crack each maze it encountered.

The final group of ‘contestants’ was a group of rates who this time were able to call upon the computational power of the algorithms developed above.  They were setup so that their right or left somatosensory cortexs were triggered whenever they needed to move right or left respectively.

Perhaps unsurprisingly, when the three groups were compared, the augmented rates performed much better than the normal rates on everything from the number of false moves they made to the time taken to get to the end of the maze.

Suffice to say, the augmentation of human brains with computers raises as many ethical questions as it does technical ones, but it seems inevitable that findings such as these will march us gradually towards such a point that these debates will take on a very real hue.

After all, there are already numerous ways in which we can ‘augment’ our intelligence by using machines, whether those are external tools or devices implanted inside us to improve the way our body functions (by restoring sight for instance).

Indeed, we’re already all familiar with the use of GPS like tools to help us avoid the kind of false steps that the natural rates in the maze would regularly take.  This is merely taking things one stage further, albeit a stage that will require a good deal of hand wringing before it’s taken.