Football (aka soccer) has been slower to embrace technology, when compared to sports like tennis and golf. However, now, this is slowly starting to change. We first saw the debut of goal-line technology at the World Cup in Brazil four years ago. This year, in Russia, we saw the introduction of Electronic Performance Tracking Systems (EPTS), an NFC enabled ball, and plenty of wearable technologies.

While wearable tech has struggled to gain (and more specifically sustain) traction in a B2C market, it's successes are most apparent in industrial settings and elite sports. Let's take a look at what's it has to offer: 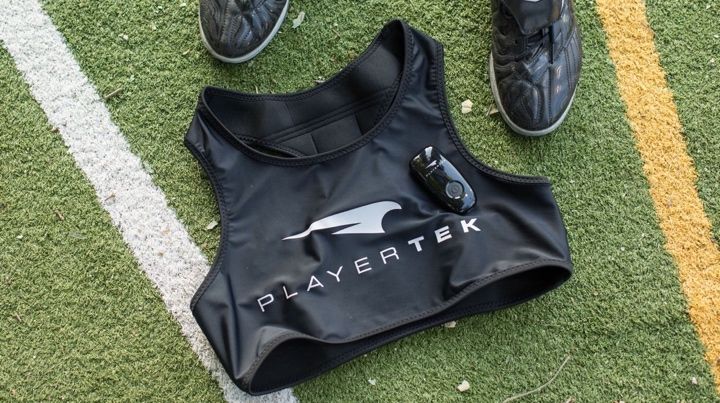 Arguably, the biggest player when it comes to sports tech is the Australian company Catapult. Catapult is responsible for a range of different solutions across 35 sports and 1520 teams. 12 world cup teams are clients including Egypt, Serbia, Sweden, Switzerland, and Uruguay. Their best know offering is Playtek, a smart vest with a device inside, called the tracking pod, that’s placed at the back. It records player speeds, the distance covered in a match, where each player traveled, and how often they sprinted.

It was a last minute decision by FIFA; but in early June 2018, the organization qualified it as safe to wear during official matches. most who wear these vests will have been using them throughout training, as well. Some of you may recall Darcy Norman, a performance data analyst with the German national team, sharing at CES a few years back that they used Adidas' miCoach during training sessions before and during the last World Cup in Brazil. Data was analyzed after training sessions to see how exactly each athlete performed. Coaches then used the information to plan future workouts more effectively and to make better personnel decisions.

Given Germany's woeful performance this time around, one has to question whether they no longer use it. It seems that it no longer works effectively or indeed had no real impact at all! Since the company bought runtastic, they are shutting down the service at the end of the year. Too much competition from Catapult, perhaps? STATSports’ Viper Pod works on a similar model to other offerings. It includes building sensors into clothes that players can wear on the training ground and in matches. It’s packed with a GPS module, a series of motion sensors, and a heart rate receiver that allows coaches to manage squad training loads from pre-season right through the entire season to effectively manage player conditioning levels and preventing injuries. It monitors metrics such as distance, speed, acceleration, step balance, and heart rate and can also report collisions and player fatigue. Clients include the National Football teams of Croatia, England, Northern Island, Wales and Poland.

Can We Get a Smart Shoe?

While there have been a few attempts at smart shoes, anything geared towards the professional football player has remained solidly in prototype or exhibition stage. The most successful efforts have been smart innersoles. SportScientia created a wireless smart insole designed to significantly enhance the performance of football players.

For youth footballers, the insole gives the chance to fulfill their potential by monitoring progress from a young age, meaning statistics and performances can be logged, and career-threatening muscular injuries can be avoided.

Not all Attempts Are Successful

Arsenal football team invested £100,000 on virtual reality for the training of its players, with the purchase of tech by the Dutch company Beyond Sports. They organized a smart room with television sets, a small pitch, and virtual reality headsets. The VR was designed to help a player view the pitch and the player at any point of the +90 minutes of the match from any and every angle. This would give the players a chance to enhance their performance by reviewing their reaction time and decision-making skills. Data collected from the Premier League was used to recreate it into 3D. Unfortunately, the experience caused nausea amongst the elite players and the tech has been consigned to use by the more junior players.

For the Wannabe World Cup Player... If your sporting ability will never reach the dizzying heights of world championships, then, there's always Zepp Play Soccer, a small tracker that slips inside a calf sleeve that is sold as part of the bundle. The device pairs via Bluetooth to a smartphone app, which uses a soccer-orientated algorithm to convert statistics into performance crunching data. You also get game reports and optional video highlights. There's also a Team Game mode, which lets multiple players connect to the same match by entering a code or by enabling their location to discover nearby games. You can then combine data with other teammates and see how you compare.

Did your favorite team utilize wearable tech to improve their game? Probably, yes. Did it work - yes, and no. Wearables are really only one tool in a toolkit that involves hours of practice, rigorous training and boot loads of natural talent. It's more likely to suggest that they add an extra layer of precision analytics that when added with the right training and skillset, can increase one's chance of success.