[Taking pride in your work can inspire you, but if not kept in check it can cause long-term challenges for the client or corporation you serve. Are you THAT person impacting your corporation in a negative way?]

In this article, I am going to ask the question if you are that person that is impacting your organization's ability to combat short and long-term challenges.

I worked with a guy who wasn't a fan of dealing with email as part of his job. Quickly, he became overwhelmed when his inbox reached a size that was too big to manage.

So what did he do?

Every two weeks, he selected all the messages in his inbox and deleted them.

His rationale was simple: he felt like he had no idea what was really important. So, after the messages were deleted, if he received a status update from one of the deleted messages, he acted on it — now understanding that the message is based on a task that should receive priority.

On a long drive to a client, he shared his secret with me. For him, this is what worked for him, but for our company, he was causing more work on others to get the response they required. However, there is something to be said about him not getting caught up in an email thread that does not lead to any required work.

The Musicians on the Titanic

I remember seeing the blockbuster movie "Titanic" when it arrived in first-run movie theaters. While enjoying the epic presentation, I recall the group of musicians who realized the doom before them as the ship was sinking and all the life-saving devices had been consumed. The musicians opted to continue playing for their remaining audience, knowing they are giving their final performance.

Lotus Notes was once considered the leader in the groupware space. In fact, their overall market share peaked at the 60% mark, rivaling their competitors for a modest period of time. The graphic below demonstrates the market share Lotus Notes has maintained over time: 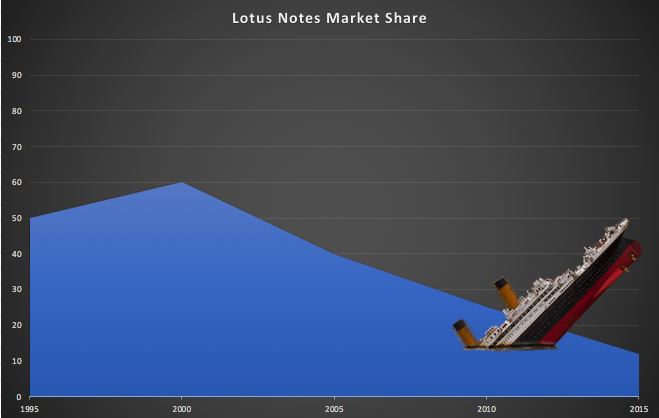 However, a little over ten years ago the market share began to nosedive downward. Or in Titanic terms, the ship that is Lotus Notes was starting to sink.

Despite the clear writing on the wall, there were Lotus Notes developers that continued to drive applications into this dying framework. Like the musicians on the Titanic, they knew their end was near, but still opted to produce applications within the Lotus Notes product.

In taking this approach, corporations are left with legacy applications needing a new home on software that has long-since reached its peak. Basically, each new Lotus Notes application added to technical debt that needed to be addressed in the future — costing more time and money to the organization.

The Reason There Is a Legacy Issue

Finally, I was on-site with a client and we were talking about next steps on our project. During the conversation, the project manager started talking about an approach which did not line up with how my mind was structuring the solution. When I asked why the approach included the unexpected path, her response indicated there was a "legacy issue" that they need to account for with our project. To protect those involved, I won't avoid providing more specifics around the solution.

As I dove deeper into the topic, I was able to determine that a decision was implemented that had more pride behind it over true architecture. In the thread of messages I was provided around the decision, there was ample support to take the path that I was expecting, but in the end, an alternative approach was taken and implemented.

There are times when it is great to have pride in your work and your decision, but there is equal value in understanding the thoughts and input of others — especially when one decision is battling a consensus. In the end, the consensus had the correct approach and the implemented approach left the corporation with a solution that required special care when attempting any integrations or communications. As one might expect, the architect behind the implement solution has since left the corporation.

When designing solutions, it is important to solicit and analyze the feedback from both your peers and those who mentor you. In fact, it is often quick and easy to reach outside your corporation to others who have considered or implemented the approach you desire. Doing so will not only help you as skilled technology, but the corporation you serve...and the future projects that will utilize the solution you are building today.

Like I wrote in my "Dealing With Rutsey, Bartman or Omarosa On Your Team" article, as individuals we maintain attributes which differentiate us from each other. This article builds upon that fact while offering thoughts around how your pride can get in the way of making the right decision for the need you are trying to solve.

Some theological beliefs have the theme of putting the needs of others before the needs of your own. This somewhat applies here, as it is important to take a step back and understand one's mindset when making or defending decisions or actions:

Be the person who makes solution-focused decisions, don't be that person that lets their pride guide the course.