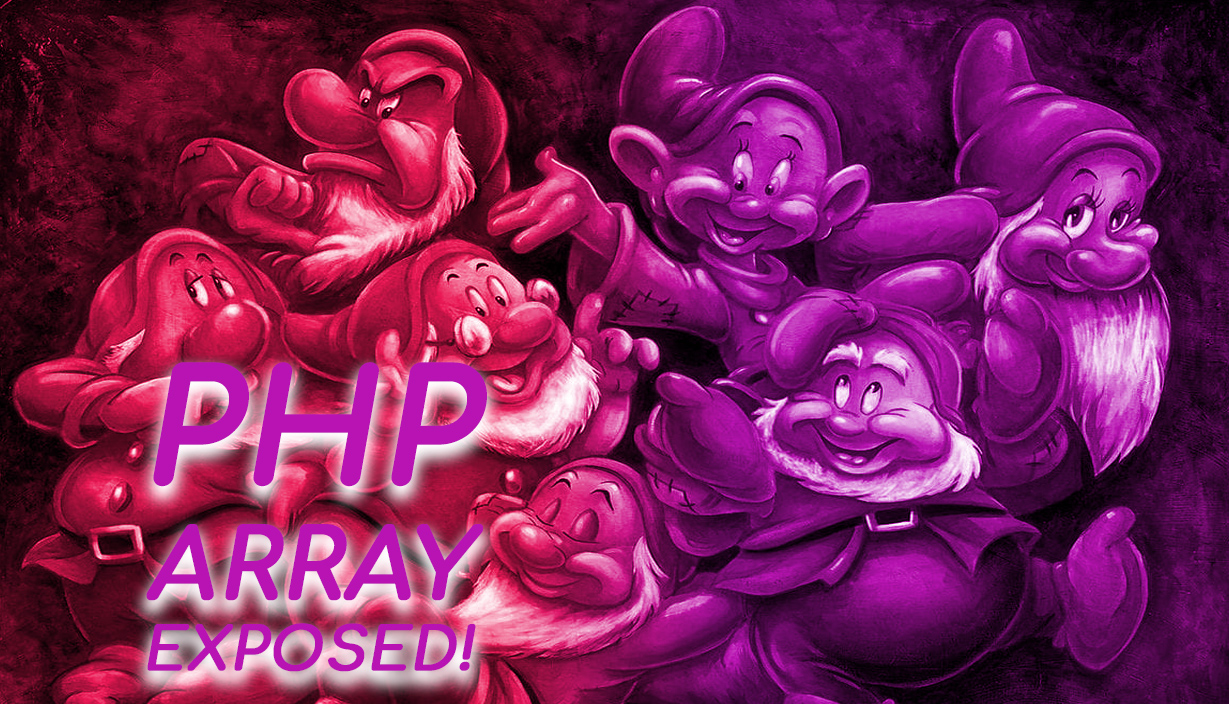 In the first part of this series, you saw some of the most used array functions that the PHP language makes available.

Fortunately, after years and years of evolution and the publication of new versions of the language this list of array functions is still long, it almost seems that it never ends.

Let's take a look at other array functions, those in the list below are a little less common but here is where you become an expert in the PHP language.

This blog post that belongs to the series, "PHP Arrays Exposed."

If you haven't already read the other articles, have a look at them:

The array_reverse() function is a fun one and at the same time very useful and incredibly easy to use.

array_reverse(), in fact, takes an array as the first and only mandatory parameter and reverses the order of the elements within the given array.

This function also has another parameter, optional in this case, which consists of a variable of type bool. If the second parameter is true the numeric keys will be kept, if instead the parameter is false or the parameter is not supplied the order will be arranged according to the elements present in the array.

Note that if the keys are not numeric they will always be saved and the second parameter will have no effect on them.

The array_flip function takes an array as a parameter and returns an array in which it exchanged keys for values. It can be seen as an original way to get the keys of an array or for dozens of different goals.

This function also has several limitations, for example, the keys must follow the precise type, as ordered from PHP the key can only be an integer or a string, otherwise you will receive a warning and the function won't work.

Another feature you need to pay attention to is the number of identical keys, in fact, only the last one among them will be used and all the others will be lost.

Here are other examples about array_flip

Admittedly the function array_rand() is a bit strange and if you decide to use it you have to pay attention that the result you want to obtain is in the chosen format.

This function can indeed return an array, an integer, or even a string.

The job of array_rand() is to take and return one or more keys from the elements present within an array.

Having been inserted into PHP 4, this function is quite old, but it has been modified several times since then.

From PHP 7.1, for example, array_rand() uses a new algorithm called Mersenne Twister to generate its numbers.

Although this algorithm randomly takes the numbers it is not suitable for cryptographic purposes.

Although similar, the shuffle() function diverges from the previous function in its result.

shuffle() randomizes the elements present within an array, which are passed by references, not by value, and at the same time returns a boolean value (true or false) depending on whether the shuffle was successful or not.

This function uses the Marsenne Twister algorithm which makes it unsafe and is certainly not suitable for cryptographic purposes.

array_replace() replaces the elements within an array.

It takes two different types of parameters, let's call them an input parameter and a substitute parameter.

If there is a third array and its keys are also present in the second and the first array, the value of the third array will replace both previous values.

Have a look at the examples below.

array_replace() is not recursive, which means that this function will not recurse into arrays and apply the same process to the inner value. If you need this functionality you can use array_replace_recursive() and specify a key for each array

Here is a short video that explains array_replace well.

When you read the manual you will see that this array function is a bit difficult to understand right away, it took me several minutes to find a use in the real world, but I'm sure that with a little imagination you will find it to be very helpful.

array_pad() adds the elements of a specified type (may be integers, strings, etc.) to an array.

It takes into consideration three parameters, the first being the input array. The second parameter consists of the final size we want the array to become (this is tricky so be careful, if the number is positive we add the values at the end of the array, if the number is negative we add them at the beginning of the input array). And finally the third parameter is the value to add.

Notice that if you pad an associative array using numeric keys as a third parameter, your keys will be renumbered.

Read about array_pad() in the official manual.

Another way to create arrays automatically is to use the array_range() function, it is very easy and requires three parameters.

Here is another function whose job is to add values to an array. array_fill() works much easier than the previous functions we've seen.

It also has three parameters. The first consists of the initial value of the key and must be an integer and can be either positive or negative. The second indicates the total number of elements we want in the array, it must also be an integer. Finally, we have the value we want to insert, it can be of mixed type.

You can see from the example above that the result of using array_fill() with negative values is not the desired one. One way to overcome this obstacle is to define the keys manually.

We can do this thanks to the function: array_fill_key().

First published in PHP 5.2, it takes into account only two parameters, an array containing the keys to be used and a second mixed-type parameter consisting of the values to be inserted.

Obviously. like its older brother array_fill(),  it also returns an array.

One of the coolest array functions among those coming in PHP 5 is undoubtedly array_combine(), which is also part of the 'creation' functions. It takes two parameters, both of type array, and returns an associative array that has the elements of the first parameter as keys and the elements of the second array as values.

Obviously, you have to be careful that the elements that will be used as keys are valid (integer or string).

Also, if there are duplicates in the keys the last one will overwrite the others.

Usually, functions that have callbacks as a parameter may seem scary, array_walk() is a bit less so.

It loops through all the elements of an array and drives a function on them that modifies them.

It takes three parameters of which the first two are mandatory, the source array and the callback function, and the third, which can be of different types, can be used in the callback.

If, at the end of the loop, there were no errors, array_walk() returns the true boolean; otherwise it returns false.

The element's value can be changed in the callback function by specifying the value's parameter as a reference using $value.

array_walk() has a younger brother that is called array_walk_recursive(). It came about in version 5 of PHP.

They share the same format and they have almost the same functionality but by using the recursive you can work with deeper an array (also called a matrix or arrays inside arrays).

I'm cheating a little here because list() is not an array function but an actual PHP construct.

The reason I entered the list() function in this post is that when I first met it, it confused me. It has a feature that can be used very rarely and, at the same time, a different format from any other element in the language (maybe it was just my impression, let me know in the comments).

However, as the manual says, list() assigns variables as if they were an array, but what does it mean?

Simply put, it takes an array as a parameter, breaks down all its elements starting from the left (right for PHP 5 and minors) and, based on their position, puts them into variables that we define at that moment. You can also skip an element by leaving a blank space.

Here is a deeply explained example of the list function by Sebastian De Deyne.

As I said in the previous article, array functions are a huge piece of PHP to digest.

The good news is that knowing them all is not a necessary requirement.

Not even at the highest levels.

Although it is important for you to know that they exist, you can always use this and the other parts of this guide as a reference and come back here as often as you like.

If you liked this content and the next set of examples on arrays functions, stay tuned and subscribe to the newsletter so you will be notified.

If you want to learn more about PHP array functions take a look at the tutorials already published which are part of this series by clicking on the links below.

Creation and Manipulation of Arrays