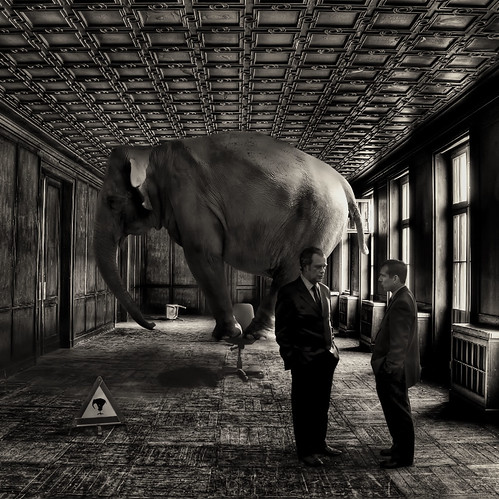 here’s a scenario from a team’s retrospective meeting:

the team had talked about a problem and had decided to hold a workshop to focus on that issue. kelly, the external consultant, saw a problem that no one was mentioning.

“i think there’s an elephant in the room here!” declared kelly

“yes, there’s a proposal to have a workshop, but no one has mentioned that last time we ran a workshop no one turned up! this seems like an undiscussable topic!” said kelly

there was general agreement that people hadn’t shown up for the last workshop. after some discussion the team decided “let’s not have a workshop then” and the meeting ended.

i think kelly’s intention was honourable – how can i get the group to start discussing things to better understand the cause of problems and ways to avoid them in future.

however, in this scenario, kelly didn’t get what she wanted – rather than get to the cause of their problems in the past, they just decided to bypass these issues and cancel the workshop.

unfortunately i think kelly’s behaviour may have contributed to the results she got including the unintended consequences, such as possibly reducing the chance that the team would feel comfortable talking about ‘undiscussable’ topics in future.

problems with the approach

there are several possible problems i see with kelly’s approach.

unclear intent . kelly raises the issue of the groups not mentioning that no-one attended the previous workshop, but she doesn’t state what her intention for mentioning it was. if you are not explicit about your intention for saying something then people will automatically invent their own reason, which may not have been what you wanted.

negative assumptions about others’ motives without providing evidence . when kelly makes the claim that there’s an “elephant in the room” it could be interpreted as her saying that the group were all aware that no one turned up to the previous workshop and that they were all deliberately not mentioning it.

kelly doesn’t provide any evidence that others are all aware of the issue, or that they have made a deliberate decision to avoid discussing the issue.  kelly’s claim is high on the ladder of inference.

making an assumption about someone else’s motive, such as thinking “this group is deliberately not talking about a problem they know to exist” is an example of an attribution. making negative attributions like this without providing evidence can mean that people feel confused or unjustly accused. once people feel accused then it increases the chance they will respond defensively or withdraw from the conversation.

changing the focus from conversation’s content to it’s style is challenging . moving from talking about the topic of a conversation (“we should have a workshop”) to talking about the style of the conversation (“we’re not discussing the undiscussable”) is a high-impact change of direction.  “going meta” like this is often worthwhile but takes skill, time and energy. to justify the investment it is better to wait until you have solid evidence of a pattern of this type of behaviour. if it’s just a single instance it more effective to keep talking about the content (“how can we make sure people turn up to this next workshop?”) rather than the communication pattern (“we’re not discussing the undiscussable”)

a more effective approach may have been as follows, with annotations in brackets on what i’m trying to model:

i’d like to check a concern i have about how we are discussing the plan to hold a workshop [share your intent] and see what other’s views are. my recollection was that the last time we planned a workshop no one showed up. i was speaking to bob and jane about this yesterday [share your evidence].  do you remember the last workshop the same way or differently? [be curious about others’ views]

if there was agreement around the fact no-one showed up to the last workshop i’d continue:

this is making me wonder if we are avoiding talking about what happened around the last workshop [state your reasoning]. i would like to talk briefly about what happened so we can avoid the same problems happening with this workshop [state your intent]. in terms of the last workshop, would anyone be willing to share what caused them not to attend? [inquire into others views]