I am astonished at the speed with which DevOps has gained traction across private industry and government organizations. This is especially surprising to me with respect to the Federal Government, which is often a (very) late adopter of new IT technologies and methodologies. Although, to my knowledge, no definitive studies exist that confirm this, DevOps seems to be gaining acceptance and adoption within the Federal Government at a faster rate than Agile did during the last 16 years.

The general consensus of when DevOps started is 2008, the year Andrew Shafer and Patrick Debois met over a talk on “Agile Infrastructure.” I worked my first Agile project as a developer that year. The Agile Manifesto was published seven years prior and adoption of Agile software development within Federal software development programs was in its infancy. Within private industry, Agile development was not as prominent as it is today, but it was further ahead in acceptance and practice and the momentum was definitely building. Many “Gray Beards” across the Federal Government and contracting industry were convinced that Agile was a fad and that it could not work within a Federal acquisitions environment (Many still believe this today!). As depicted in the chart below (source: “Agile by the Numbers,” Deloitte Insights, 5/5/2017), in 2008, roughly 17% of all major Federal IT projects were described as Agile or iterative. By 2017, that percentage rose to approximately 80%: a 370% increase. 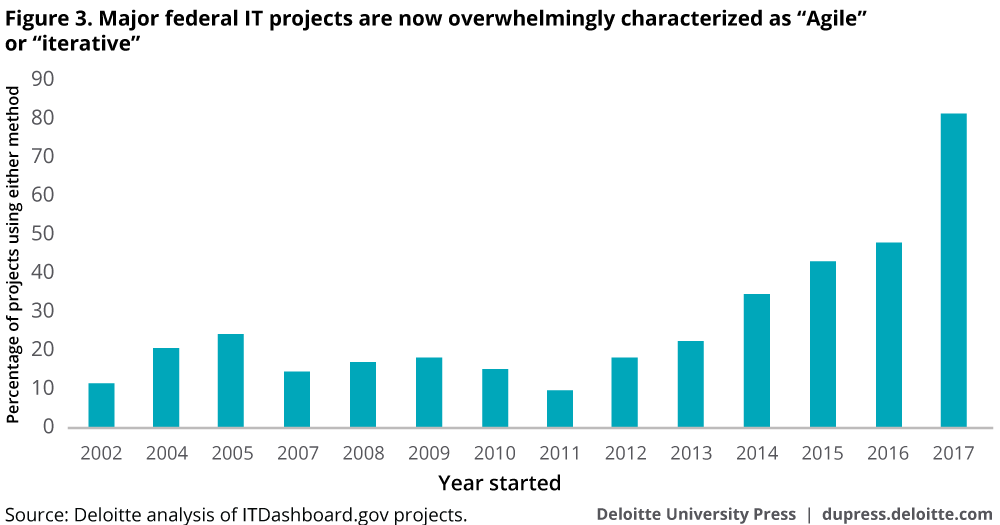 Since the Federal Government does not yet collect information on the DevOps implementations it sponsors, I am making an anecdotal comparison. I started hearing government contractors pitching DevOps to Federal agencies in 2014. As of 2017, most, if not every RFI or RFP for Agile software development services I encounter include requirements for DevOps services. It took Agile roughly 16 years to become a standard practice for Federal software development efforts. Ten years after it was first proposed, a large number of Federal agencies see DevOps as desirable and necessary and are willing to spend significant sums of money to implement it.

I suppose this relatively swift embrace of DevOps by the Federal Government should not surprise me. DevOps is an easy sell because of three main factors. First, Agile laid the groundwork for acceptance of DevOps. The second factor is a realization across the Federal Government that iterative and incremental software development approaches are superior to traditional monolithic (“Big Bang”) development and delivery. Third, the shift to cloud architectures enables and encourages DevOps implementations. Agile and cloud adoption serve as catalysts for DevOps adoption. In addition, DevOps has a compelling value proposition: increased opportunity for efficiencies, faster and more frequent deployments, and tighter collaboration and alignment between developers, operations, and organizational sponsors.

While DevOps is, indeed, a game changer, for the large-scale, software-intensive, systems-of-systems integration projects typically funded by the Federal Government, it is not enough. Despite DevOps’ core emphasis on developing a collaborative culture between development, operations, and across the organization, there is little guidance on how to do that as part of a DevOps approach. The Scaled Agile Framework (SAFe) fully incorporates DevOps while providing a more holistic approach to organizing multiple Agile teams into programs that live the DevOps culture.

The Continuous Delivery Pipeline is SAFe’s DevOps approach. This approach tightly integrates with SAFe’s concept of the Agile Release Train (ART). The ART is a cross-functional team/organization of 50 to 125 people that delivers technical capabilities (i.e., software, hardware, firmware, systems). The ART is a “virtual” or matrix organization in the sense that it brings together people who, under traditional software program management practices, are typically siloed apart from each other: Engineers, testers, security, enterprise architects, configuration managers, release managers, program managers, product managers, operations, maintenance, business stakeholders, etc.

The ART aligns very well with the DevOps concept of collaboration. However, collaboration in an ART goes well beyond the work performed by developers and operations. It includes representation from all stakeholders who affect or who are affected by the ART. SAFe also aligns program and portfolio-level concerns with the work performed by Agile teams. DevOps emphasizes the need for collaboration at all levels, but there is next to no guidance on how to foster it.

An ART fulfills the IT capabilities needs of a value stream. A value stream is the chain of processes, systems, and people that that delivers business value (goods or services) to a customer. As an example, consider the steps required for a delivery company to deliver a package. Since value streams operate for as long as customers procure value from them, value streams, and the systems that support them are long-lived. Just like the flow of value, the flow of IT capabilities is continuous: unencumbered by wasteful handoffs, reviews, queues, delays, and project starts and stops. For a given value stream, developers and operations personnel apply DevOps concepts and practices as part of an ART. This emphasis on eliminating waste and promoting flow aligns with DevOps philosophy and practice.

With respect to SAFe’s Continuous Delivery Pipeline, the ART performs three interlocking and reinforcing activities: Continuous Exploration (CE), Continuous Integration (CI), and Continuous Deployment (CD). The goal of CE is to develop a program-level vision, roadmap, and backlog that the ART fulfills by delivering features. As the name suggests, CI encompasses the activities that develop, integrate, and test prioritized features resulting from CE activities. The CD process deploys validated features into the production environment where they are further tested and prepared for release. SAFe’s CI and CD concepts closely align with the same-named concepts in DevOps. Automation is a critical enabler of CI and CD activities in both DevOps and SAFe. However, SAFe goes further by enabling the creation of portfolio and program-level ecosystems that align with DevOps.

Bottom line: Like Agile, attempts to solve problems and improve performance by applying new technology and practices, while ignoring the cultural and organizational prerequisites that support those approaches, has colored many DevOps implementations. Also like Agile, DevOps is not solely or even primarily about tools, technologies, and technical practices. It is a mindset. Rather than merely exhorting practitioners to change their organizational culture to one that is more collaborative and integrated, SAFe provides a framework that enables the creation of such a culture. SAFe enables and enforces a balance between DevOps technical practices and the cultural and organizational behaviors and structures that enable its success.

The Developer's Role in Enabling Continuous Integration and Deployment

Win Your DevOps Conversation With Business