J2SE 5 introduced numerous features to the Java programming language. One of these features is autoboxing and unboxing, a feature that I use almost daily without even thinking about it. It is often convenient (especially when used with collections), but every once in a while it leads to some nasty surprises, "weirdness," and "madness." In this blog post, I look at a rare (but interesting to me) case of NoSuchMethodError resulting from mixing classes compiled with Java versions before autoboxing/unboxing with classes compiled with Java versions that include autoboxing/unboxing.

Before unboxing was available, any clients of the above Sum class would need to provide primitives to these "add" methods or, if they had reference equivalents of the primitives, would need to convert the references to their primitive counterparts before calling one of the "add" methods. The onus was on the client code to do this conversion from reference type to corresponding primitive type before calling these methods. Examples of how this might be accomplished are shown in the next code listing.

J2SE 5's autoboxing and unboxing feature was intended to address this extraneous effort required in a case like this. With unboxing, client code could call the above "add" methods with references types corresponding to the expected primitive types and the references would be automatically "unboxed" to the primitive form so that the appropriate "add" methods could be invoked. Section 5.1.8 ("Unboxing Conversion") of The Java Language Specification explains which primitives the supplied numeric reference types are converted to in unboxing andSection 5.1.7 ("Boxing Conversion") of that same specification lists the references types that are autoboxed from each primitive in autoboxing. 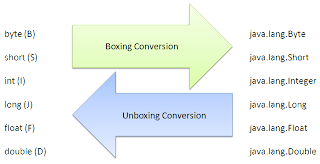 In this example, unboxing reduced effort on the client's part in terms of converting reference types to their corresponding primitive counterparts before calling Sum's "add" methods, but it did not completely free the client from needing to process the number values before providing them. Because reference types can be null, it is possible for a client to provide a null reference to one of Sum's "add" methods and, when Java attempts to automatically unbox that null to its corresponding primitive, a NullPointerException is thrown. The next code listing adapts that from above to indicate how the conversion of reference to primitive is no longer necessary on the client side but checking for null is still necessary to avoid the NullPointerException.

Requiring client code to check their references for null before calling the "add" methods on Sum may be something we want to avoid when designing our API. One way to remove that need is to change the "add" methods to explicitly accept the reference types rather than the primitive types. Then, the Sum class could check for null before explicitly or implicitly (unboxing) dereferencing it. The revised Sum class with this changed and more client-friendly API is shown next.

Sum Class with "add" Methods Expecting References Rather than Primitives

The revised Sum class is more client-friendly because it allows the client to pass a reference to any of its "add" methods without concern for whether the passed-in reference is null or not. However, the change of the Sumclass's API like this can lead to NoSuchMethodErrors if either class involved (the client class or one of the versions of the Sum class) is compiled with different versions of Java. In particular, if the client code uses primitives and is compiled with JDK 1.4 or earlier and the Sum class is the latest version shown (expecting references instead of primitives) and is compiled with J2SE 5 or later, a NoSuchMethodError like the following will be encountered (the "S" indicates it was the "add" method expecting a primitive short and the "V" indicates that method returned void).

On the other hand, if the client is compiled with J2SE 5 or later and with primitive values being supplied toSum as in the first example (pre-unboxing) and the Sum class is compiled in JDK 1.4 or earlier with "add" methods expecting primitives, a different version of the NoSuchMethodError is encountered. Note that theShort reference is cited here.

There are several observations and reminders to Java developers that come from this.

Fortunately, the issue demonstrated with examples and text in this post is not that common thanks to builds typically cleaning all artifacts and rebuilding code on a relatively continuous basis. However, there are cases where this could occur and one of the most likely such situations is when using an old JAR file accidentally because it lies in wait on the runtime classpath.