evolving the concept of the devops approach at the jelastic platform , this time we are pleased to present you with the third guide from this devoted series. the new solution, described in today’s article, gives even greater automation through not just ensuring the project lifecycle management, but also simplifying the process of jenkins continuous integration server configuration.

this is achieved through combining two progressive technologies: jelastic pluggable add-ons and cloud scripting operations – the next generation solution for application and server management within the cloud, which is currently being intensely developed by the jelastic team. in particular, such an integration allows to automatically create the complete list of job templates, which just need to be slightly tuned (with operations like setting a url to the repository with the required project, instead of the default one) to complete the jenkins server adjustment.

the true efficiency of such an implementation is maximally revealed in the case of handling multiple projects, as instead of the countless step-by-step manual configurations, required for each of the jenkins servers to be properly set, you’ll need to create a single add-on just once. subsequently, it can be easily applied to the required environment in a few clicks with only a few user-dependent parameters required to be adjusted. such an approach saves an increasing amount time on each following installation.

as this article is tightly connected with the previous two parts of the ”devops tools for continuous delivery in jelastic private cloud” series, we will periodically refer to them in order not to repeat describing the same steps. that’s why we recommend you get acquainted with these guides firstly before proceeding further:

first of all, let us remind you of  a few obligatory arrangements, required to be accomplished in order to ensure the best devops experience:

we’ve considered these steps in details previously, thus we are sure you won’t meet any troubles here.

as it was already mentioned within this guide’s introduction, the greatest part of the work at the stage of jenkins server’s setting up is going to be automated. to gain this, the appropriate configurations should be implemented within the code firstly, which will be subsequently executed at your application server with jenkins handling. at jelastic, this could be done through preparing a special json manifest file, which, being integrated to the platform, will represent a pluggable add-on , that can be easily run by any user directly through the dashboard.

let’s start with composing the basis for our add-on in order to get the ability to apply it to the required jelastic environment further:

once inside, expand the add list at the top pane and select the add-on option.

the highlighted parameters should be substituted with the appropriate data – here you need to define the general information about your package and specify the operations it is intended to perform:

whilst the first two settings are obvious, the last one needs to be considered in more detail, thus the next section of the guide is devoted to the specifics of the required operations’ scripting.

in our example, the jenkins integration tool is installed over tomcat 7 , so all the commands used would be based on its specifications. we intend to automate the process through scripting the following operations:

further, we’ll examine each of these points in more detail and prepare the core of our manifest according to this flow.

note: below we provide you with the example code, which needs to be modified according to the specifics of your application. in order to ensure this was done correctly and all of the actions were scripted properly, we recommend a preliminary test of your code. this could be done through creating a separate environment with the same topology your add-on is being created for (i.e. tomcat 7 with jenkins app deployed in our case) and running the adjusted commands directly inside your compute node’s container using ssh . if you need any assistance with this, please refer to the complete guidance on the devops add-on for jenkins troubleshooting , which additionally includes descriptions of the expected results for each of the presented operations.

so, let’s reveal how the above suggested processes can be easily accomplished, with the help of the appropriate cloud scripting options. subsequently, all of them need to be inserted instead of the custom_code parameter in the manifest example, in the same order they are described below.

in this piece of code you can recognize the process of uploading the scripts (they are required for setting jenkins jobs) to the container. previously, we’ve done this manually and considered everything in detail, thus here, we’ll just remind you of some crucial points (highlighted in the example above) that you need to pay attention to:

note that before applying, each of the script templates, linked above, have to be additionally adjusted by substituting the following parameters according to your platform’s settings:

in addition, the 3rd string defines creation of the variables file alongside the uploaded scripts, intended to be used for further storing the automatically generated name for the environments with your app’s different versions.

we recommend to use the package we’ve prepared for this example, which already contains all the necessary modules. however, you can complement it with other plugins if necessary or just pack your own zip archive – in this case, note that there are several obligatory tools it should comprise (namely: scm api plugin , git plugin , git client plugin , environment file plugin ) and all of them should be put in the plugins folder inside the archive.

the archive structure should be the following: one general jobs folder, which may include multiple directories, named after the appropriate comprised jobs. each of such directories should contain the config.xml file (with all the required configs specified inside) and the builds folder with an empty legacyids file. we’ve already prepared such an archive , which contains settings for creation of the jobs, devoted to each step of the proposed application lifecycle flow:

note that in case you are using your custom path to the scripts folder, you need to edit the build and deploy job in our example package, as it contains the defined location of the file inside that directory:

everything else may remain as is, however, you can also edit it or add your own jobs if needed.

5. finally, define the restart of the server in order to apply all of the executed configs.

being combined together, all these code parts will automatically perform almost all the required jenkins configurations.

thus, now you can place them within the appropriate commands manifest section as it was suggested above – you’ll get something similar to the following: 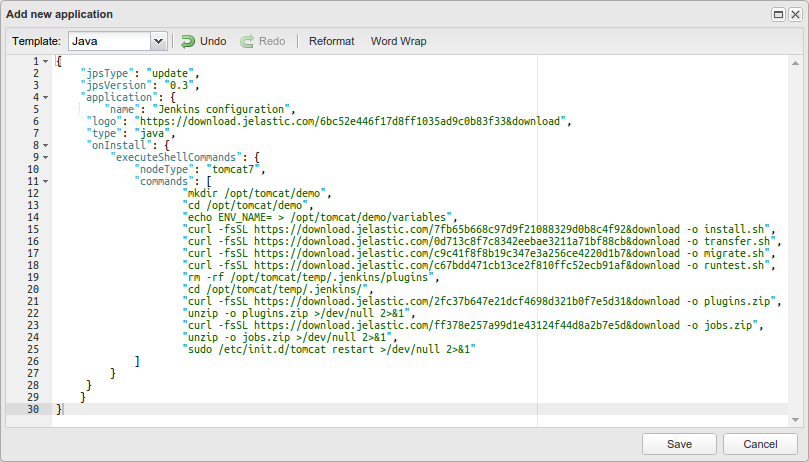 finally, to make our module accessible via the dashboard, find and select it within the list, click on the publish button above and confirm this action at the shown pop-up.

everything is prepared now, so let’s just see how quick and simple the implementation of our devops approach becomes now.

navigate to the jelastic dashboard (for the account your jenkins environment is running at) and perform the following to plug your add-on to the appropriate application server.

locate your add-on (named jenkins configuration in our case) and install it with the appropriate button.

as you can see, we’ve got the list of already prepared jobs.

in order to access a particular job’s parameters and change them, use the configure context menu option (can be called through right-clicking) for the required record:

note: as an example for this guide, we use a 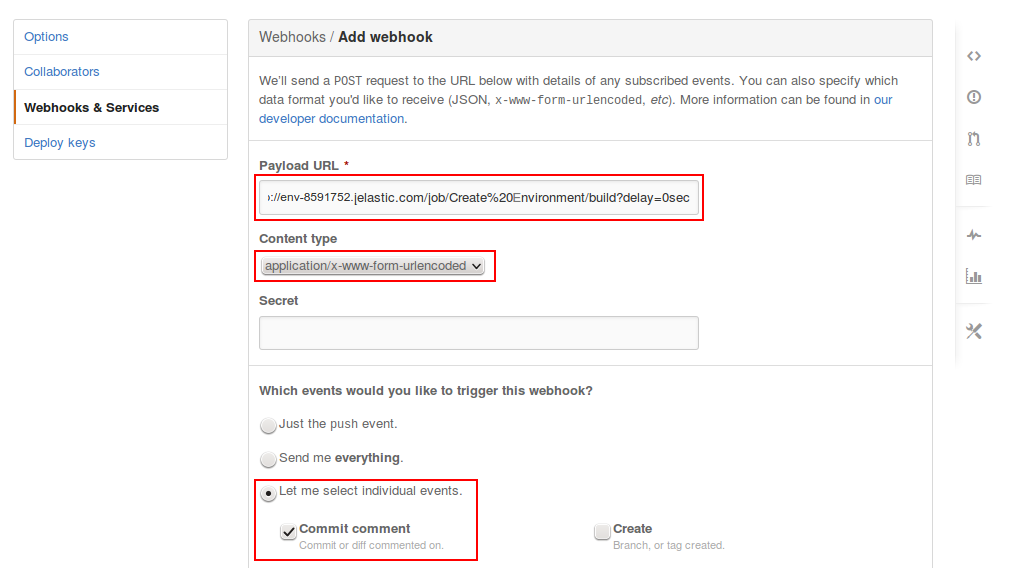 that’s all! now you have a fully configured and ready-to-work integration complex, that waits only for the project change to be committed in order to automatically create an environment, deploy a new application version and move it through the set of required testing and relocation steps. after that, your checked application will appear at production.

and having the jelastic attachable add-on for jenkins configuration already prepared, you can quickly apply this approach to any of your projects through deploying a new continuous delivery mechanism within a few clicks and with slight adjustments done.