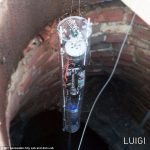 a common argument when it comes to migrants is that ‘they’ are taking ‘our’ jobs, to which a common retort is that migrants are often doing jobs that the native population simply don’t want to do.

there’s quite probably an element of truth to that, but with automation encountering many of the same fears, is there a similar argument for robots doing jobs too grotty for humans to really consider?

i suspect in large part the answer is no, but then you have the robot developed by a team from mit that does make you wonder.  the project aims to understand human beings better by examining their microbiome, and sets out to achieve this by trawling the sewers for samples.

the robot, which is called luigi, aims to provide us with a better understanding of everything from drug usage to antibiotic resistance as a result of its examination of our sewerage.

luigi is part of the underworlds project, which has recently completed a pilot in cambridge, massachusetts.  luigi is designed to take on many of the risky, and frankly gross, tasks that are required to get a decent sample from the sewers.

after the successful trial, luigi is set to go into operation in both kuwait city and the greater boston area, and the team is confident that he will have a significant impact on the public health of both areas.

of course, checking for public health issues is not the only application robots are being used for in sewers, with a number of devices checking our drains for blockages.

they’re already well known for doing dangerous work, whether it’s bomb disposal or even military action.  robots are increasingly capable of performing certain types of space exploration .  robots are even increasingly being used in areas such as security, whether it’s monitoring cctv or even patrolling facilities themselves, with microsoft already experimenting with robotic security guards.

robots are also undertaking many dull and repetitive jobs, whether it’s checking customers into hotels, managing luggage for travelers, or fulfilling the orders we place online and restocking shelves in stores.  they’re even increasingly delivering those orders to our door.

such robots are becoming increasingly commonplace, and it isn’t at all clear that much can be done to stop their advance.  i wrote recently about a study looking at the role the minimum wage plays in the adoption of automated technologies.

with millions of robots sold each year, and the number growing by between 20-30% each year, the number of roles that will be influenced by automation is only likely to increase, with a growing number of companies preparing for just such a future (even if employees don’t appear to be ).

suffice to say, it’s difficult to predict how things will unfold, but change is certainly afoot.  how ready are you?