With a DevOps culture becoming a standard, we face automation everywhere. It is an essential part of our daily work to automate as much as possible. It simplifies and shortens our daily duties, which de facto leads to cost optimization. Moreover, respected developers, administrators, and enterprises rely on automation because it eliminates the probability of human error (which, by the way, takes second place when it comes to security breach causes).

Additionally, our infrastructure gets more and more complicated as we evolve towards cloud-native and microservice architectures. That is why Infrastructure as Code (IaC) came up. It’s an answer to the growing complexity of our systems.

What you’ll find in this article:

Why Do We Need to Automate Our Enterprise Infrastructure?

Let’s start with a short story. Close your eyes and imagine this:

It's a sunny morning, your brand new startup service is booming. The developers have built a nice microservice-oriented infrastructure and they’ve configured AWS infrastructure; it's all pretty shiny. Suddenly, you receive a phone call from someone who says that Amazon’s cleaning lady slipped into one of the AWS data centers, fell on the computing rack, and the whole Availability Zone went down. Your service is down, users are unhappy.

You tell your developers to recreate the infrastructure in a different data center as fast as they can. Well, it turns out that it’s not possible as fast as you would wish. Last time, it took them a week to spin up the infrastructure, which consists of many parts… you’re doomed.

The story is an example of Disaster Recovery, or rather a lack of it. No one thought that anything might go wrong. But as Murphy’s Law says: Anything that can go wrong will go wrong.

As a progressive developer, you’re learning bleeding-edge cloud technologies to keep up with changing requirements for your employer. You decided to use AWS. Following Michal’s tutorial, you happily created your enterprise-level infrastructure. After a long day, you cheerfully lay down to bed. The horror begins when you enter your bank account at the end of the month. Seems that Amazon charged you for the resources you didn’t delete.

You think these scenarios are unreal? Get to know these stories:

How do you avoid these scenarios? The simple answer to that is IaC.

Infrastructure as Code is a way to create a recipe for your infrastructure. Normally, a recipe consists of two parts: ingredients and directions/method on how to turn ingredients into the actual dish. IaC is similar, except the narration is a little bit different.

IaC also tells you this:

Nowadays, most IaC tools do the infrastructure provisioning for you and keep it idempotent. So, you just have to prepare the ingredients. Sounds cool, right?

An important thing to note here is that the approach described above leans you towards GitOps and trunk-based CI/CD. It is not a coincidence that these concepts are often listed one next to the other. Eventually, this is a big part of what DevOps is all about.

Still not sure how IoC is beneficial to you? Read this:

During the HacktOberFest conference, Michal set up the infrastructure manually – live during his lecture. It took him around 30 minutes – even though Michal is an experienced developer.

Using cloud formation scripts, the same infrastructure is up and running in ~5 minutes, besides it doesn’t mean that we have to continuously watch over the script being processed. We can just fire and forget, go, have a coffee for the remaining 4 minutes and 50 seconds.

Your infrastructure boots up six times faster and you have some extra free time. Eventually, it boils down  to the question of if you can afford such a waste.

With that being said, we can clearly see that IaC is the foundation on top of which enterprises may implement:

Note that IaC is just a guideline and IaC tools are just tools that enable you to achieve the before-mentioned goals faster and better. No tool does the actual work for you.

Regardless of your specific needs, either you build enterprise infrastructure and want to have HA and DR or you just deploy your first application to the cloud and reduce the cost of it, thus IoC is beneficial for you.

Which IaC Tool to Use?

There are many IaC tool offerings on the market. Each claim to be the best one. Only to satisfy our AWS deployment automation, we can go with Terraform, AWS Cloud Formation, Ansible and many many more. Which one to use? There is no straight answer, as always in IT: it depends. We recommend doing a few PoC, trying out various tools and afterward decide which one fits you best.

How Do We Do It? Cloud Formation

As aforementioned, we need to transcribe our infrastructure into code. So, how do we do it?

First, we need a tool for that. So there it is, the missing piece of Enterprise level AWS Infrastructure – Cloud Formation. It’s an AWS native IaC tool commonly used to automate infrastructure deployment.

Well… ok, actually, Cloud Formation is a little bit more than that. It’s also an AWS service that accepts CF scripts and orchestrates AWS to spin up all of the resources you requested in the right order (simply put, it automates the clicking in the console). Besides, it gives you live insight into the requested resource status.

Cloud formation follows the notion of declarative infrastructure definitions. On the other hand, with an imperative approach in which you see how to provision infrastructure, declaratively you just specify what is the expected result. The knowledge of how to spin up requested resources lies on the AWS side.

If you followed Michal Kapiczynski’s tutorials, the Cloud Formation scripts presented underneath are just all his heavy work, written down to ~500 lines of YAML that you can keep in the repository right next to your application.

Note: Further reading requires you to either see Michals articles or a basic knowledge of AWS. 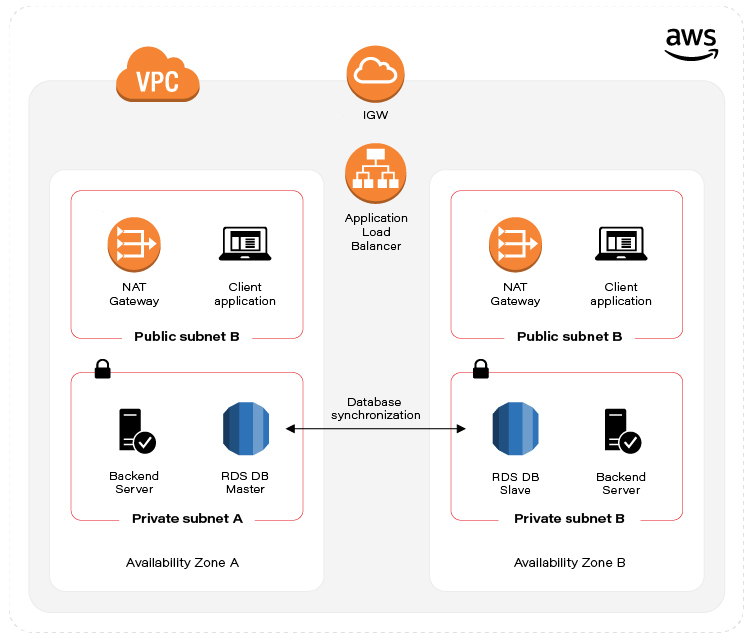 TLDR; If you’re here just to see the finished Cloud Formation script, please go ahead and visit this GitHub repository.

Stacks usually contain all resources necessary to implement planned functionality. It can consist of: VPC, Subnets, EC2 instances, Load Balancers, etc. This way, we can spin up and tear down all of the resources at once with just one click (or one CLI command).

Each Template can be parametrized. To achieve easy scaling capabilities and disaster recovery, we’ll introduce the Availability Zone parameter. It will allow us to deploy the infrastructure in any AWS data center all around the world just by changing the parameter value.

As you will see through the second part of the guide, Cloud Formation scripts include a few extra resources in comparison to what was originally shown in Michal’s Articles. That’s because AWS creates these resources automatically for you under the hood when you create the infrastructure manually. But since we’re doing the automation, we have to define these resources explicitly.

Published at DZone with permission of Maciej Jozefczyk. See the original article here.