Serverless has become the most used deployment pattern for cloud applications. In this field, AWS Lambda is a very well known player. Every developer wants to get his hands dirty with lambda, build a quick function code, and run it.

However, there are myths that AWS manages the compute so Lambda is hands-off. It handles scalability, ha, security, performance and so on by its own. Lambda is not like an AI robot which learns on its own and optimizes its configurations to improve all the cloud-native metrics. Developers need to pay attention while designing and learn how to balance between cost and performance. In this blog, I am going to share how we can get the best use of Lambda by understanding how it works.

When we run a Lambda function, it by default runs on a VPC, which does have internet access. However, it won't have access to any other private VPC. And when I say internet access, it means it can access only S3 and Dynamodb AWS Services. It won't be able to access any other AWS resources (RDS, Elasticsearch, etc..) as they would be running under another VPC.

If a function runs on a Lambda-managed VPC, Lambda takes care of its availability running on multiple AZs of that VPC region. 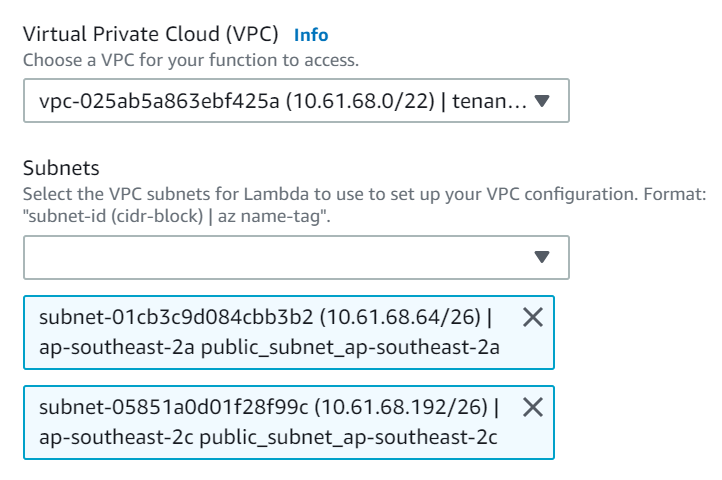 AWS Lambda handles the scalability by its own. "So why should I be concerned?" you might ask. The truth is nothing comes with infinite resources. Similarly, Lambda also does have concurrency execution limits:

Account level  — By default, it is 1000 per region across all the functions.

Function level — By default, it will use the "Unreserved Account Concurrency limit" but that is not a good practice. It can throttle other functions in case one exhausts all the account level concurrency limit. To avoid that, we should always reserve the concurrency limit for each Function so the impact is isolated to only that function if the number of events surges for any reason.

Note — AWS will always keep an unreserved concurrency pool with a minimum of 100 concurrent execution to process the requests of the functions which didn't set any specific limit. So you would be able to allocate up to 900 only.

What if We Are Running the Lambda in A Dedicated VPC?

In that case, we need to have sufficient IP addresses based on the ENI scalability requirement of the function.  You can estimate the approximate ENI capacity with the following formula:

One more thing to remember while designing concurrency in lambda, we should always consider the limitation of other integrated services like DynamoDB, RDS, etc.. We need to adjust the concurrency limit for the function based on the max connection these services can handle.

As discussed in the Concurrency section, any surge of the events for a function can cause throttling if it exceeds the concurrency limit. It means it will not process any new requests. Now, we need to understand how to handle it gracefully, else it may cause a huge business impact.

A Balance Between Memory and Cost

In Lambda, memory, and CPU go hand-in-hand. If you increase memory, CPU allocation will also increase. Now, if we need to reduce the time of lambda execution, we would try increasing memory/CPU to process it faster. But, here is the catch, if we experiment in detail, we will find that after a certain limit increasing the memory doesn't reduce the execution time but it increases the cost so there is a balance required between performance and the cost involved.

There are few open source tools available which claim to help you find the best power configuration.  However, I prefer to monitor the usage of the memory and execution time through CloudWatch logs and then adjust the configuration accordingly. Increasing or decreasing a small number makes a big difference in overall AWS cost.

When we invoke the Lambda first time, it does download the code from S3, download all the dependencies, create a container, and start the application before it executes the code. This whole duration (except the execution of code) is known as a cold start time. Once the container is up and running, for subsequent Lambda invocation, Lambda is already initialized and it just needs to execute the application logic and that duration is, called warm start time.

So should we be worried about cold start time or warm start time? Well, cold start time takes a significant amount of time as part of the full execution, so more emphasis is around reducing that one. However, warm time also can be reduced by following good coding practice.

Now, let's discuss how can we improve the Lambda performance overall:

You will notice in every blog or documentation mentioning that Lambda execution environment already does have AWS SDK for Nodejs and Python so don't add them in your dependency. It is good for performance improvement but there is a catch.

This SDK library will be upgraded regularly with the latest patches and may impact your Lambda behavior so prefer to have your own dependency management.

AWS Lambda is all about your code running in the cloud. So how should we test it in local?

Lambda doesn't provide any endpoint URL to test directly. It always depends on the event source systems to initiate. 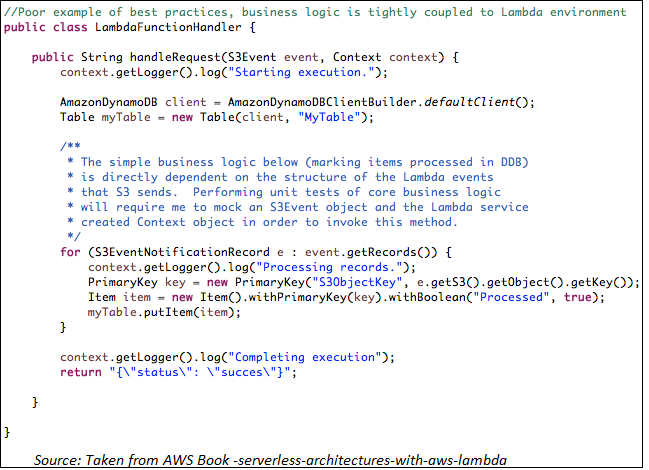 Lambda has Versioning and Alias features as well. We can publish multiple versions of a function. Each version can be invoked in parallel in a separate container. By default, version would be  $LATEST . We can use these versions during development for creating multiple environments like dev/UAT, however, it is not recommended to be used directly for Production env as every time we upload new code, the version will be incremented and clients need to point to the new one. That's where Aliases comes into the picture.

Aliases refer to a particular version of the function. So if the code changes and a newer version is published, event source will still point to the same alias but the alias will be updated to refer to the newer version. This helps to plan a Blue/Green Deployment. We can test the newer version with sample events and once it works fine, it can be pointed by the Alias to switch the traffic to it. This can be used for rollback to original version also if any issues found. We can also use X-Ray to identify potential bottlenecks in our Lambda execution. The X-Ray can be useful when trying to visualize where we are spending our function’s execution time. It also helps to trace all the downstream systems it connects with the complete flow.

In this article, we talked about many best practices we can use while designing and deploying Lambda. Depending on the coding language and use cases applied, we can improve its performance. Other cloud platforms have learned from it and coming up with Serverless on Kubernetes platform. I am eager to get them matured enough to use for Production-like applications.

Please do share your opinion through comments on the best practices we can use to run Lambda more effectively.