Our customers rely on us to help them navigate the complexities of the increasingly competitive cloud wars. Should they use Amazon Web Services (AWS)? Google Cloud Platform (GCP)? Microsoft Azure? How should they tune their workload for different offerings? Which is more reliable?

We are committed to building a cloud-neutral product, and we run test clusters on all three leading US cloud providers. As we were testing features for our 2.1 release, we noticed something interesting: AWS offered 40% greater throughput than GCP.

We were curious as to why AWS offered such a stark difference in throughput, and set out to test the performance of GCP and AWS in more detail. Ultimately, we compared the two platforms on TPC-C performance (e.g., throughput and latency), CPU, Network, I/O, and cost.

This inspired what has become the 2018 Cloud Report.

Our conclusion? AWS outperforms Google on nearly every criteria we tested — including cost.

Note: We did not test Microsoft Azure due to bandwidth constraints but plan to do so in the near future.

GCP has a variety of instance types (including standard and high CPU) but we focused on the n1-standard-16 machine with Intel Xeon Scalable Processor (Skylake) in the us-east region. We were familiar with this instance type as we used it to conduct our previous performance benchmarking.

A similar configuration isn't quite as trivial as it sounds for AWS. AWS has more flavors of instances than Google. It has the standard high CPU and general instances. We chose the latest compute-optimized AWS instance type, c5d.4xlarge instances, to match n1-standard-16, because they both have 16 CPUs and SSDs (although AWS only offers 32 GB of ram as compared to 60 GB of ram on GCP) within the us-east-2 region.

We designed our experiment to first tease out whether or not AWS and GCP performance differed on a simulated customer workload. We started with a customer workload (and not micro-benchmarks) because it most directly simulates real-world customer behavior.

We chose to test workload performance by using TPC-C, a popular OLTP benchmark tool that simulates an e-commerce business, given our familiarity with this workload. 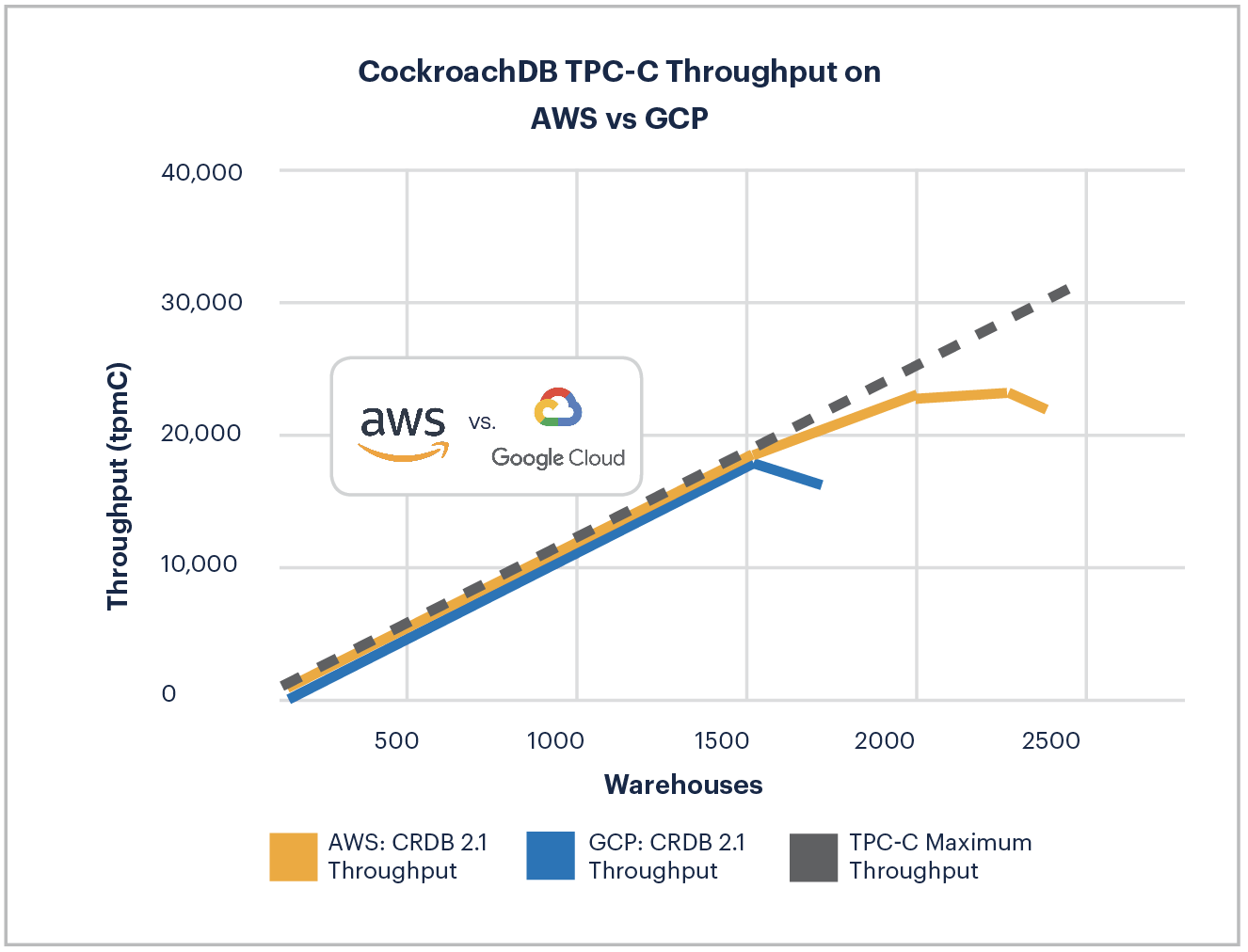 CockroachDB 2.1 achieves 40% more throughput (tpmC) on TPC-C when tested on AWS using c5d.4xlarge than on GCP via n1-standard-16. We were shocked that AWS offered such superior performance.

Previously, our internal testing suggested more equitable outcomes between AWS and GCP. We decided to expand beyond the c5 series to test TPC-C against some of the most popular AWS instance types.

At first blush, it appears that SSDs offered by c5d and m5d outperform EBS. Unfortunately, it's a bit more complicated than that as AWS offers EBS out of the box with gp2 volume types and the higher performing io1 volume type. To isolate this change we focused on the higher-performing c5 series with SSDs, EBS-gp2, and EBS-io1 volume types:

Clearly, EBS volumes can offer effective performance if tuned to the io1 volume type and provided with sufficient iOPS.

So if the difference isn't explained by SSD vs. EBS, what else might explain it? AWS recently introduced their new Nitro System present in c5 and m5 series. The AWS Nitro System offers approximately the same or superior performance when compared to a similar GCP instance. 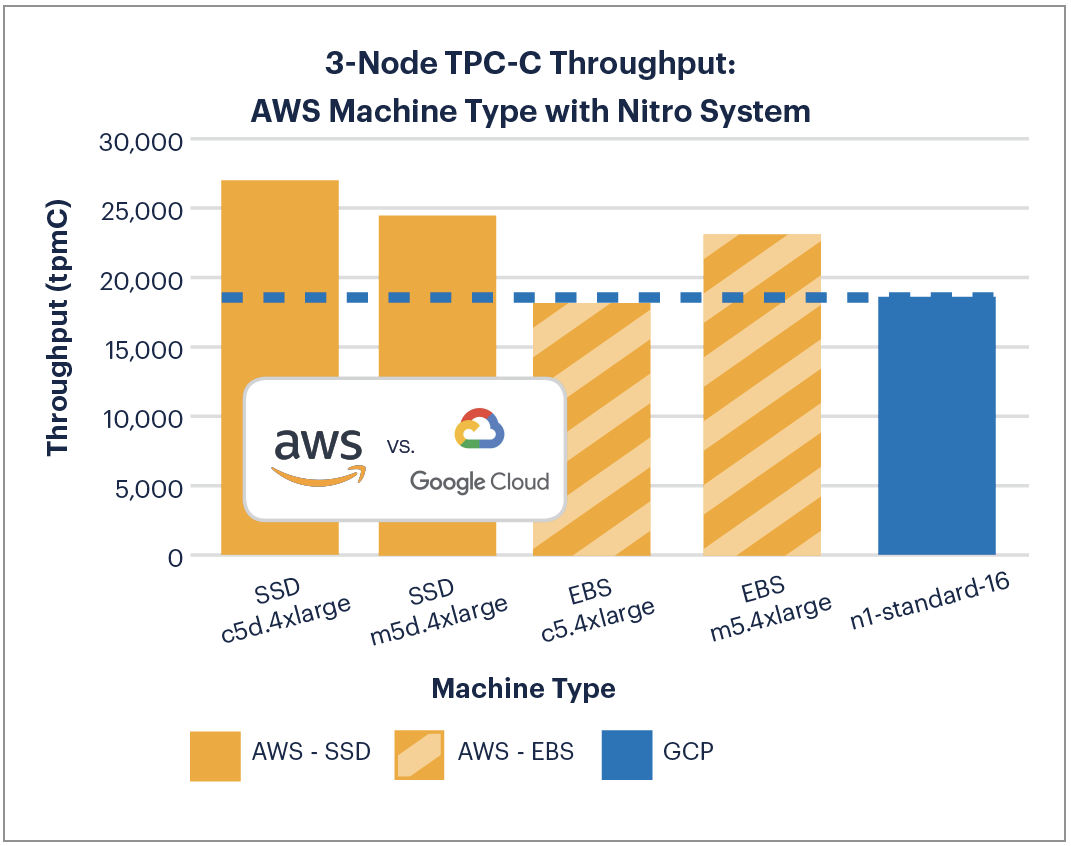 The results were clear: AWS wins on TPC-C benchmark performance. But what causes such large performance differentials? We set out to learn more by testing a series of microbenchmarks on CPU, Network, and I/O.

We began our testing like any aspirational scientists by seeking to disprove our main hypothesis: that cloud platforms different provisions might affect CPU performance.

We focused on a CPU performance microbenchmark first as it can have a large impact on performance.

To test CPU performance, we needed a 3rd-party, easy-to-use benchmark. The two most frequently used benchmark test suites in the market today are sysbench and stress-ng. We chose stress-ng because it offered more benchmarks and provided more flexible configurations than sysbench.

AWS offered 28% more throughput (~2,900) on stress-ng than GCP. Both AWS and GCP offered generally consistent CPU performance across runs. This is a credit to the investments made by both platforms as unpredictability can have a material cost for business paid in the over-provisioning of virtual machines. Note that the Skylake series (used in this experiment) offers a marginal 4% improvement over standard hardware on GCPs n1-standard-16.

iPerf's configurations include a buffer data size (128kb), a protocol, a server, and a client. iPerf attempts to connect the client and the server with the data from buffer size via the protocol. We setup iPerf similarly to this blog post. This test provides a throughout for the network which allows for us to compare the performance of the network on AWS and GCP. We ran the test four times each for AWS and GCP and aggregated the results of all four tests in histograms (each 1 sec run is stacked to form this chart): 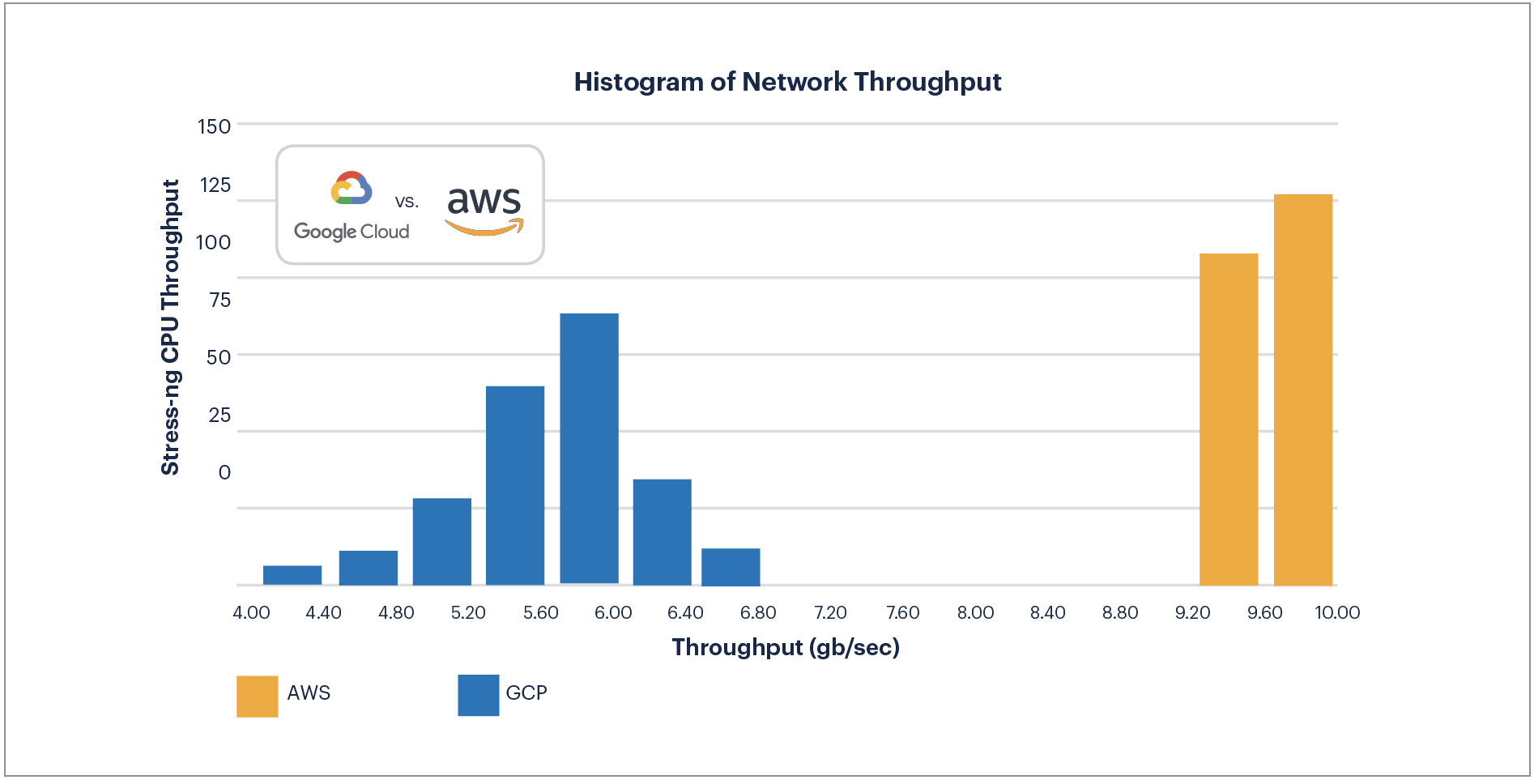 AWS, on the other hand, stands out as it offers significantly higher throughput, centered on 9.6, while providing a much tighter spread between 9.60 GB/sec and 9.63 GB/sec when compared to GCP. On AWS, iPerf transferred a total network throughput of 2,295.83 GB. This is an increase of 70% over GCP. On average, this is more than 4 GB/sec increase in throughput.

We tested network latency, in addition to the throughput and variance. Without testing for latency we can miss significant delays in service that may be masked by overall performance. We used the industry standard tool PING to measure latency. 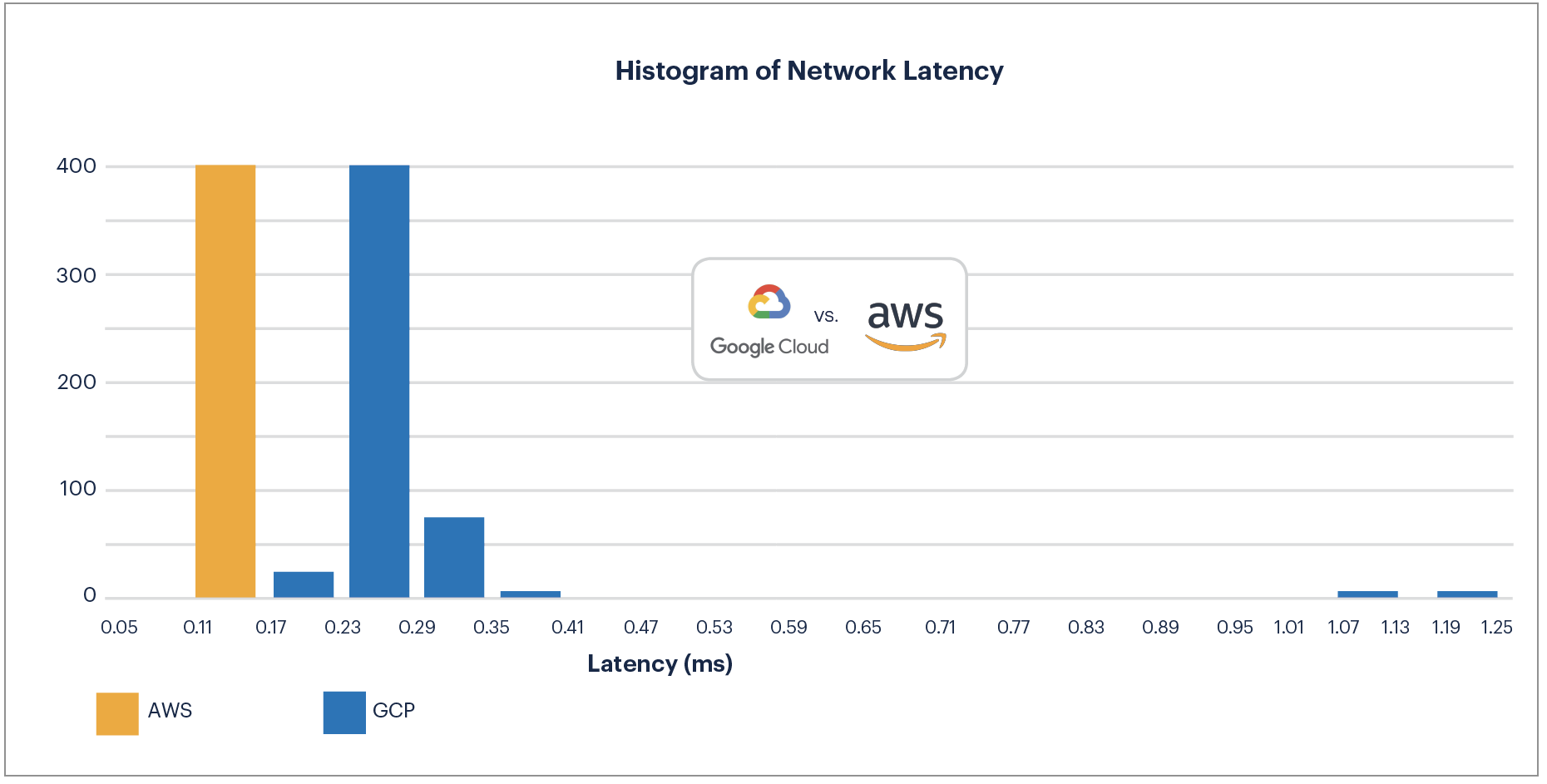 At first glance, it appears that GCP has a tighter latency spread (when compared to the network throughput) centered on 0.2 ms. After looking a bit more closely we can see that there are several outliers such that the max latency, 1.25 ms, which is more than 5 times the average!

AWS offers significantly better network throughput and latency with none of the variability present in GCP. Further, it looks like Amazon may be racing further ahead in network performance with the introduction of the c5n machine type that offers significantly higher network performance across all instance sizes as compared to the rest of the c series.

We tested I/O using a configuration of Sysbench that simulates small writes with frequent syncs for both write and read performance. We ran the Sysbench test writing to an SSD to achieve similar results to running a database in production.

This test measures throughput based on a fixed set of threads, or the number of items concurrently writing to disk. 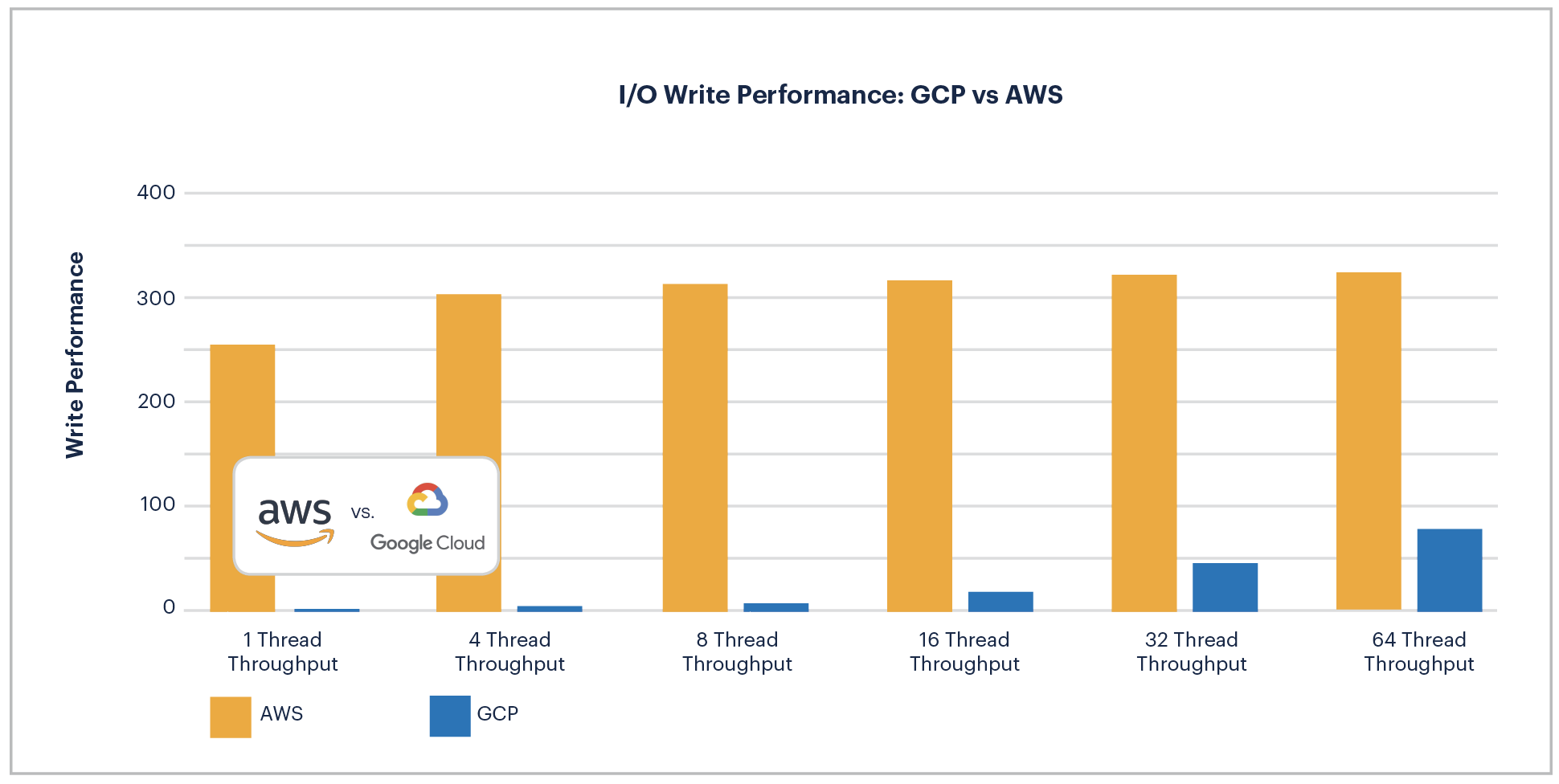 AWS consistently offers more write throughput across all thread variance from 1 thread up to 64. In fact, it can be as high as 67x difference in throughput. 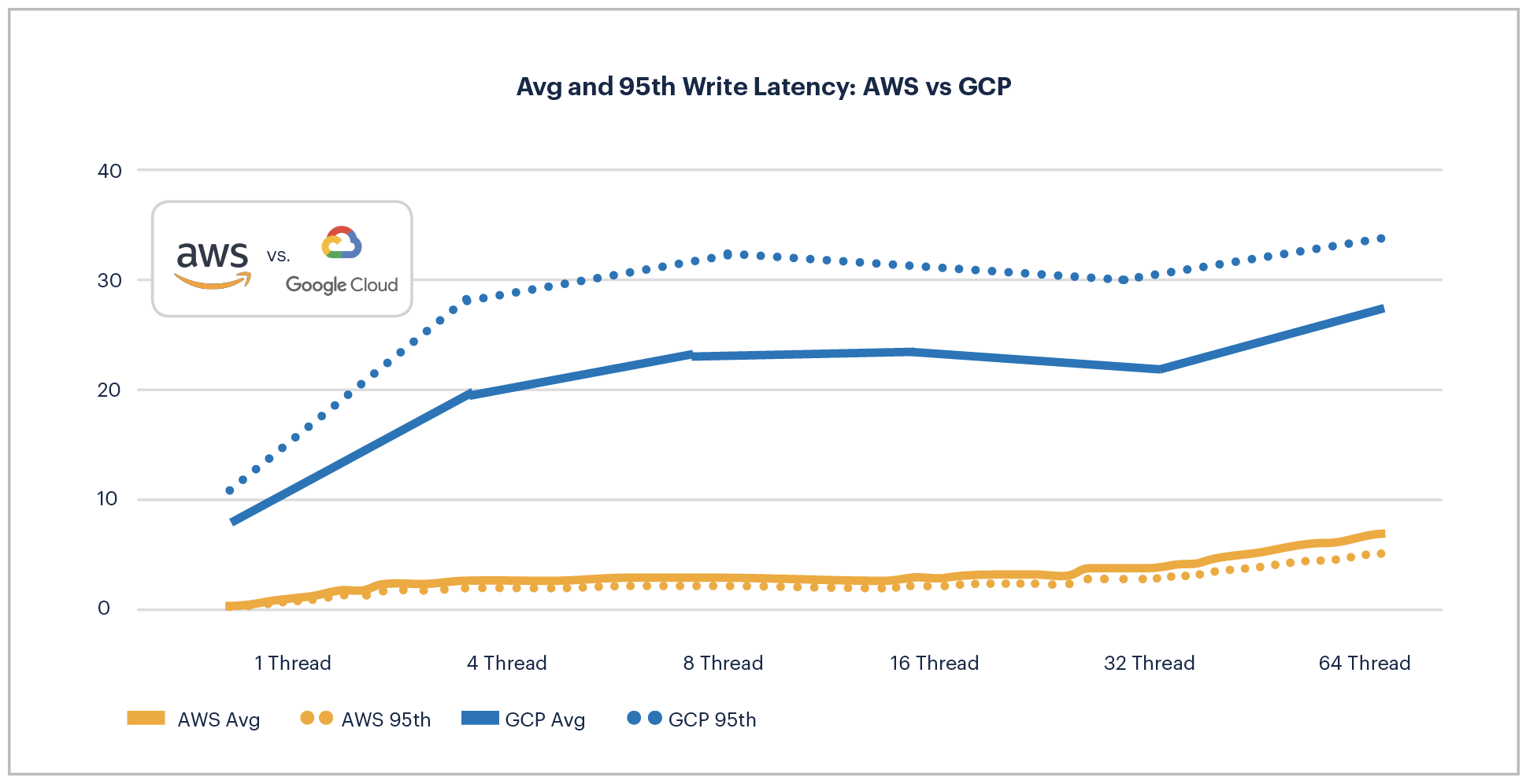 Similarly to write latency, AWS wins the read latency battle up to 32 threads. At 32 and 64 threads, GCP and AWS split the results.

What about performing this experiment with no barrier? As a refresher, no barrier is a method of writing directly to disk without waiting for the write cache to be flushed. This is faster, but in the event of a crash, data can be corrupted. Note that no barrier can be safely used with battery-backed write caches. We were curious how big a performance advantage this offered so we tested nobarrier on GCP and AWS and saw large changes in performance.

On applied benchmarks (e.g., TPC-C) and the more descriptive micro-benchmark — CPU, network, and I/O — AWS outperformed GCP. But at what cost? Do you pay for this increased performance on AWS?

Let's circle back to the TPC-C setup discussed at the beginning. For TPC-C, we used n1-standard-16 on GCP with local SSD and c5d.4xlarge on AWS. For both clouds we assumed the most generous discounts available: 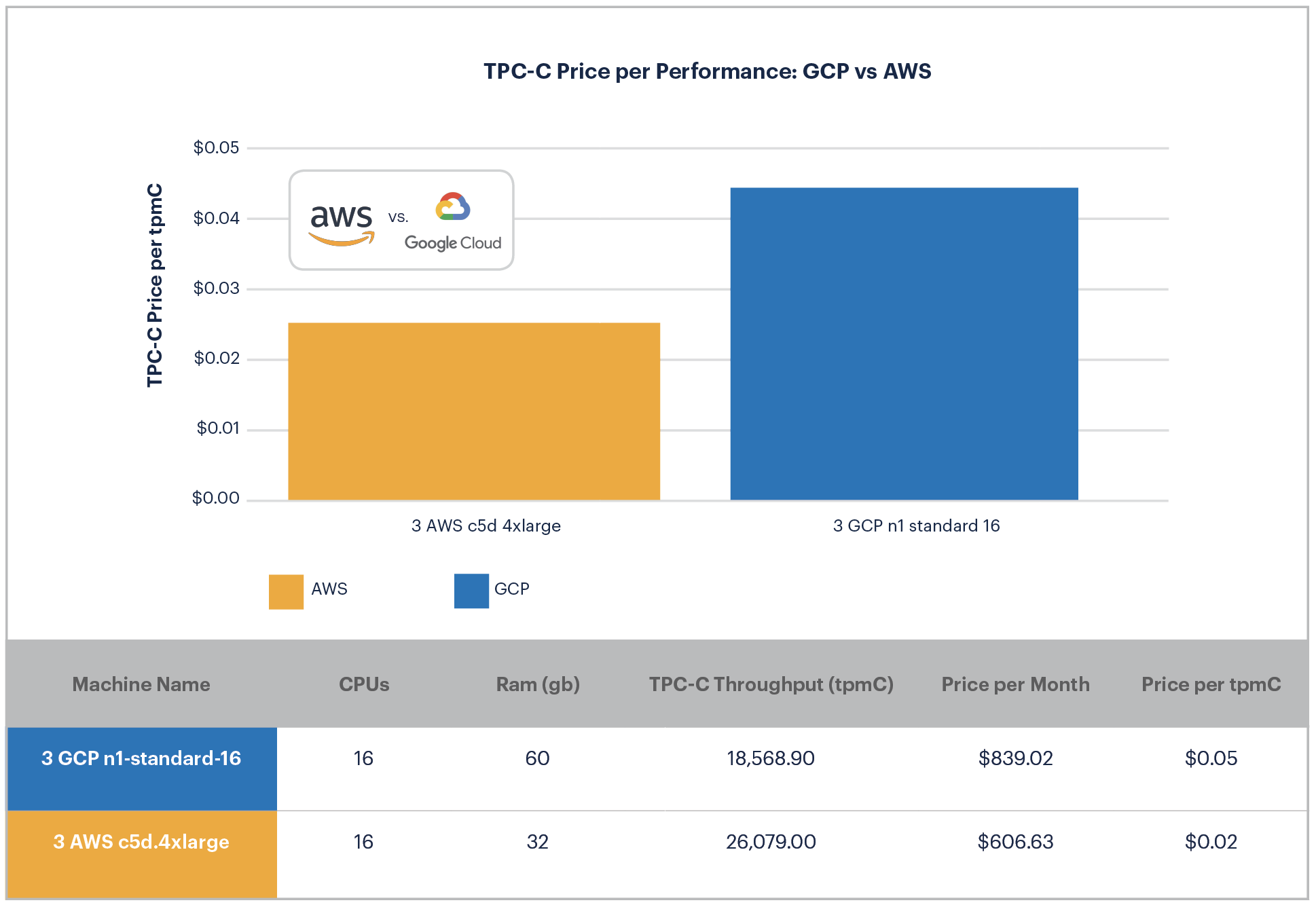 Not only is Google more expensive than AWS, but it also achieves worse performance. This is doubly reflected in the price per performance (below), which shows GCP costing 2.5 times more than AWS per tpmC (the primary metric of throughput in TPC-C)!

AWS outperformed GCP on applied performance (e.g., TPC-C) and a variety of micro-benchmarks (e.g, CPU, Network, and I/O) as well as cost. We recommend using AWS for your most important workloads.

CockroachDB remains committed to our stance as a cloud-agnostic database. We will continue to use GCP, AWS, Microsoft Azure, and others for internal stability and performance testing. We also expect that these results will change over time as all three companies continue to invest in the modern infrastructure ecosystem.

Note, the 2018 Cloud Report focused on evaluating AWS and GCP because they are the most popular cloud platforms among our customers. In future editions, we plan to expand upon our testing with Microsoft Azure, Digital Ocean, and other cloud platforms.