AWS Storage Gateway provides integration between the on-premises IT environment and the AWS storage infrastructure. The user can store data in the AWS cloud for scalable data security features and cost-efficient storage. 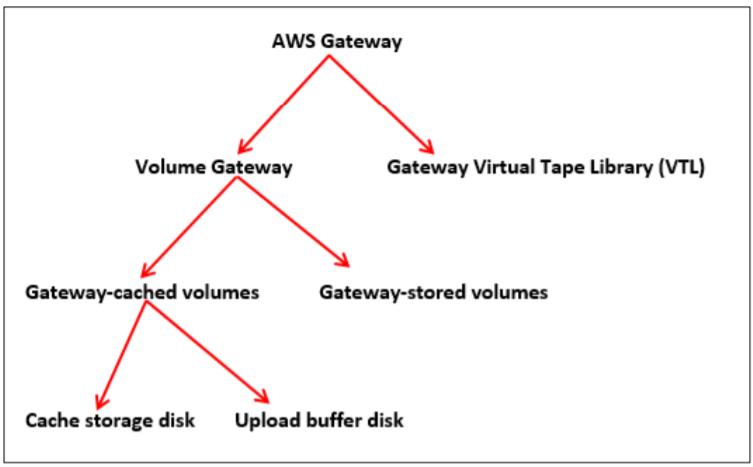 There are a few guidelines to determine the amount of disk space to be allocated for cache storage. We should allocate at least 20% of the existing file store size as cache storage. It should be more than the upload buffer.

This type of storage disk is used to store the data before it is uploaded to Amazon S3 over SSL connection. The storage gateway uploads the data from the upload buffer over an SSL connection to AWS.

Sometimes we need to back up storage volumes in Amazon S3. These backups are incremental and are known as snapshots. The snapshots are stored in Amazon S3 as Amazon EBS snapshots. Incremental backup means that a new snapshot is backing up only the data that has changed since the last snapshot. We can take snapshots either at a scheduled interval or as per the requirement.

A gateway-stored volume allows to store primary data locally and provides on-premises applications with low-latency access to entire datasets. We can mount them as iSCSI devices to the on-premises application servers. It ranges from 1 GB to 16 TB in size and supports up to 12 volumes per gateway with a maximum storage of 192 TB.

This storage type provides a virtual tape infrastructure that scales seamlessly with your business needs and eliminates the operational burden of provisioning, scaling, and maintaining a physical tape infrastructure. Each gateway-VTL is preconfigured with a media changer and tape drives, that are available with the existing client backup applications as iSCSI devices. Tape cartridges can be added later as required to archive the data.

A few terms used in architecture are explained below.

Each gateway-VTL comes with one VTL. VTL is similar to a physical tape library available on-premises with tape drives. The gateway first stores data locally, then asynchronously uploads it to virtual tapes of VTL.

A VTL tape drive is similar to a physical tape drive that can perform I/O operations on tape. Each VTL consists of 10 tape drives that are used for backup applications as iSCSI devices.

A VTL media changer is similar to a robot that moves tapes around ina physical tape library's storage slots and tape drives. Each VTL comes with one media changer that is used for backup applications as iSCSI device.

A VTS is used to archive tapes from gateway VTL to VTS and vice versa. When the backup software ejects a tape, the gateway moves the tape to the VTS for storage. It is used for data archiving and backups.