I realized earlier this year the last tech conference I attended was JAX London in 2015. I generally like to attend something every two or three years to keep up to date with what's trending in the industry. It's been so long since the last one because I'd spent the last couple of years working on some really great stuff in my previous contract — greenfield redevelopment of legacy apps on the AWS serverless platform. There was so much new and interesting tech to get to grips with on an application that was transferring and processing nearly 10TB of data daily from on-premise to S3 — I really didn't feel the need to pick up anything else. Lambdas, CloudFormation (and Terraform), S3, DynamoDB, SQS, SNS, not to mention Java 8, Python, Groovy, Spock — well, there wasn't much bandwidth to learn anything else even if I wanted to.

Fast forward 6 months and the tech stack in the new contract isn't as exciting (even if the domain is) — and I felt it was time to look at the conferences available this year to keep abreast on developments in the industry.

I was keen to keep AWS front and center in my skill set, so when I saw the AWS Summit advertised, that looked a great fit. Especially given it was free... (which, after the event I'm not so sure was a good thing, which I'll get on to).

The summit is held in the ExCel centre in East London. The trip there was hampered by two broken trains on the DLR, which saw us stuck for some time. We got moving again, only to get to Canning Town tube to be met with a sea of similarly affected stranded travelers. The staff urged people to take the buses — I was hesitant for a while as I didn't have a clue on which bus to get, until I heard them say they may have to close the station. The bus ranks downstairs were not much better. It looked pretty grim until I realized we were actually pretty close to the ExCel at Canning Town — only a 20-minute walk actually. A guy I was standing next to reached a similar conclusion so we compared notes and joined the few others who had also decided to make it by foot. We had an interesting chat on the walk about life in the tech industry and beyond. It's sometimes these unexpected events and encounters that make days like this more interesting. 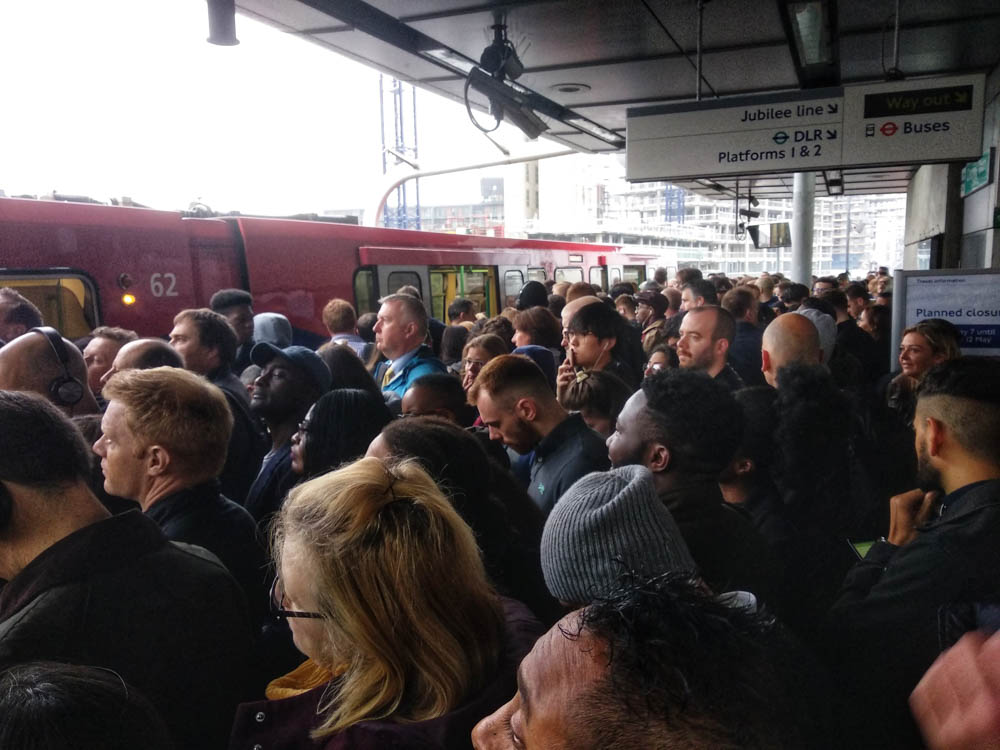 The delay meant my original plan of getting there early, grabbing a coffee and having a wander around the stands was no longer an option. The keynote was due to start soon and I had to find where to register (which, of course, turned out to be the far end of the ExCel center from where we entered). As I walked down the inside, it became apparent that a huge queue had formed for the keynote already. Registration was quick — it looked like they were well-prepared for the numbers, and as I was joining the tail end — I got straight to a registration desk and got my pass and lanyard. 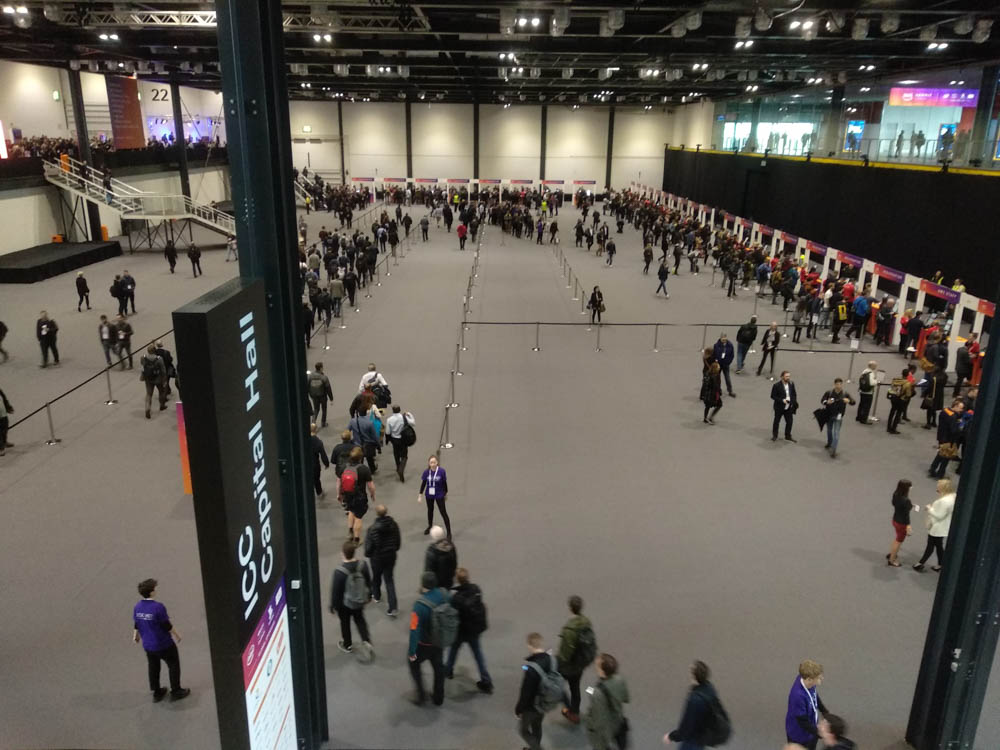 It was disheartening to walk back down the queue for the keynote, which seemed never to end. It looked as if people were entering through other entranceways — so I followed them. It turned out this was the entrance to the other lecture theatres, which were live streaming the keynote on large video screens. This was a better option as I could get straight in and grab a decent seat. 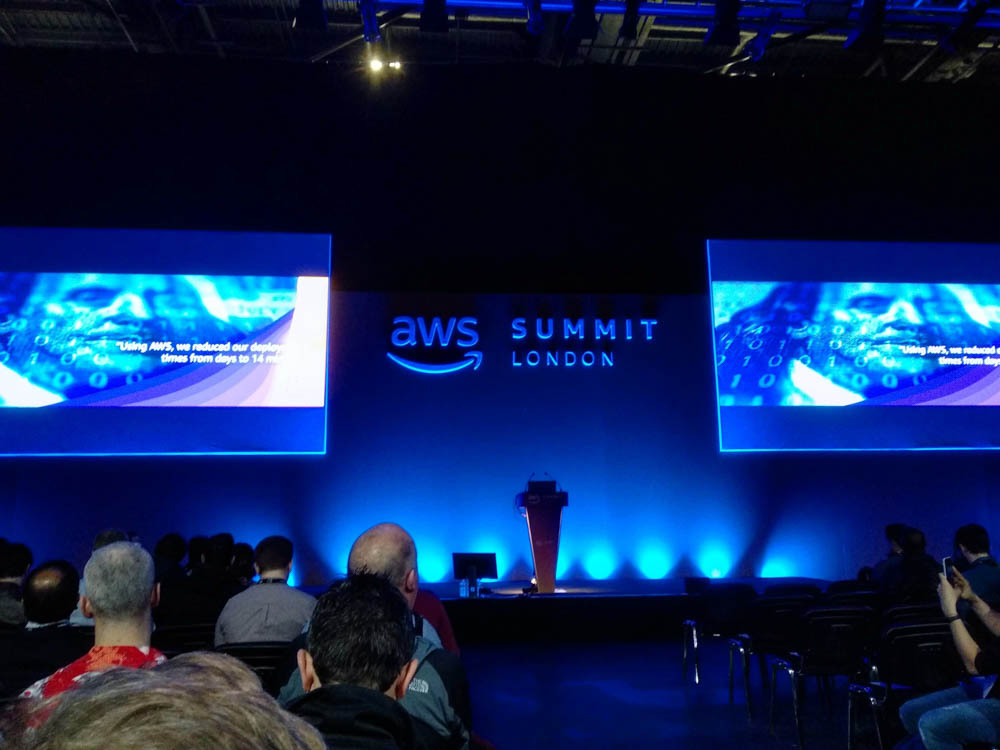 The keynote was fine: the first guy (Darren Mowry) was a good presenter and gave an engaging introduction — playing on all the innovations that have come from the UK over the years, and how cloud computing, and AWS in particular, of course, will help fuel innovation in the coming years. He stressed that we are still just very much at the start of a long journey. This was also the biggest single-day event AWS had ever done, with 12,000 people in attendance (and it showed...). He also covered the shortfall in skills which will accompany this expansion and schemes they were investing in to train the next generation of techies, particularly encouraging young women to get into the tech industry. All good, encouraging stuff. He was followed by the main keynote speaker, Matt Garmen, VC of AWS Compute Services. Matt obviously has a wealth of experience, and his introduction was good. He introduced a very enthusiastic presentation from Sainsburys, with much gushing over the transformational effect AWS has had on their business (which strangely is a competitor to Amazon, you would think..). He then went on to cover each of the AWS Services. It got a bit dry for me at that point — and I was dying for a coffee and some food, and chance to get oriented a bit — so I ducked out.

I've included the video of the keynote below.

I grabbed a bagel and a coffee and had a quick walk around the AWS village to see what was going on. The Deep Racer car AI development and race track looked interesting, but I didn't really have a chance to have a closer look. Most of the stands were companies I hadn't heard of. I did have a chat with the Elasticsearch guys, but soon it was time to get to the first lecture. 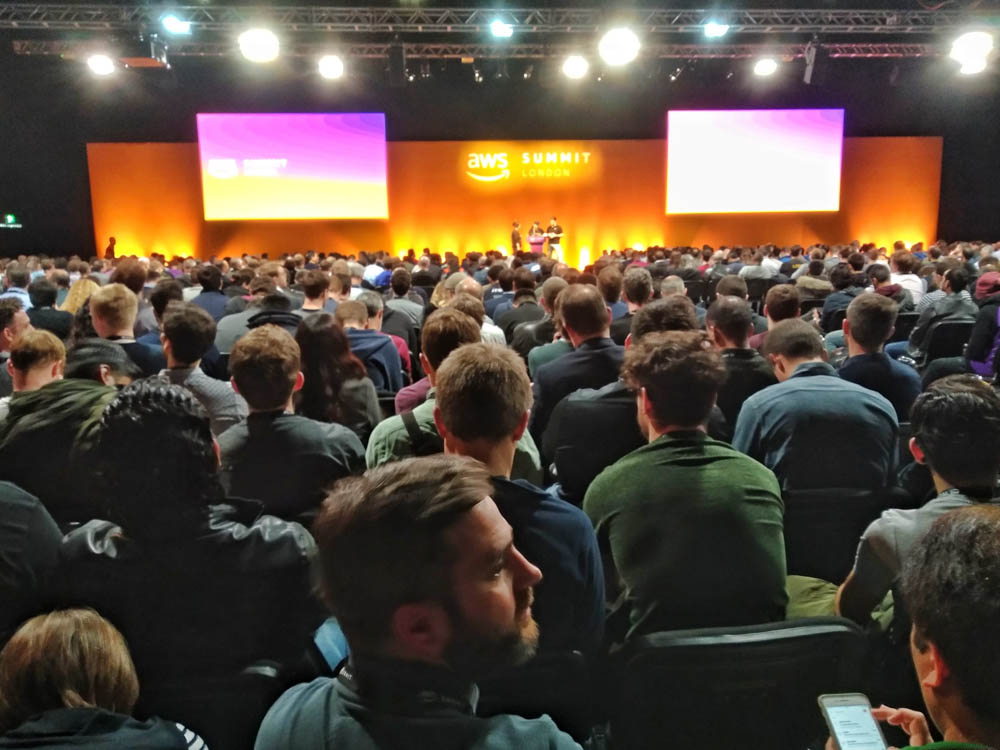 I opted for the DevOps At Amazon talk (there were multiple concurrent lectures). It covered how Amazon had adopted DevOps, working in the classic two-pizza teams with full accountability for their services. How everything is coded, how they removed unproductive time wasted in meetings and comms, allowing them to focus on acting quickly to develop new features and fix bugs. This has involved cultural changes to philosophy and developing patterns and processes. They have thousands of teams, with millions of deployments a year. This was all good stuff — and very familiar from my last project where we tried to get as close as we could (and we were pretty close) to this kind of operating process. Very different to my current workplace — but there are moves to improve.

The next lecture I decided to go for something I know absolutely nothing about — Building Modern APIs with GraphQL. I've heard it mentioned, and thought it would be nice to pick up something entirely new from the day, because it was seeming like a lot of the other lectures would be reinforcing best practices I was already familiar with by virtue of my previous project. 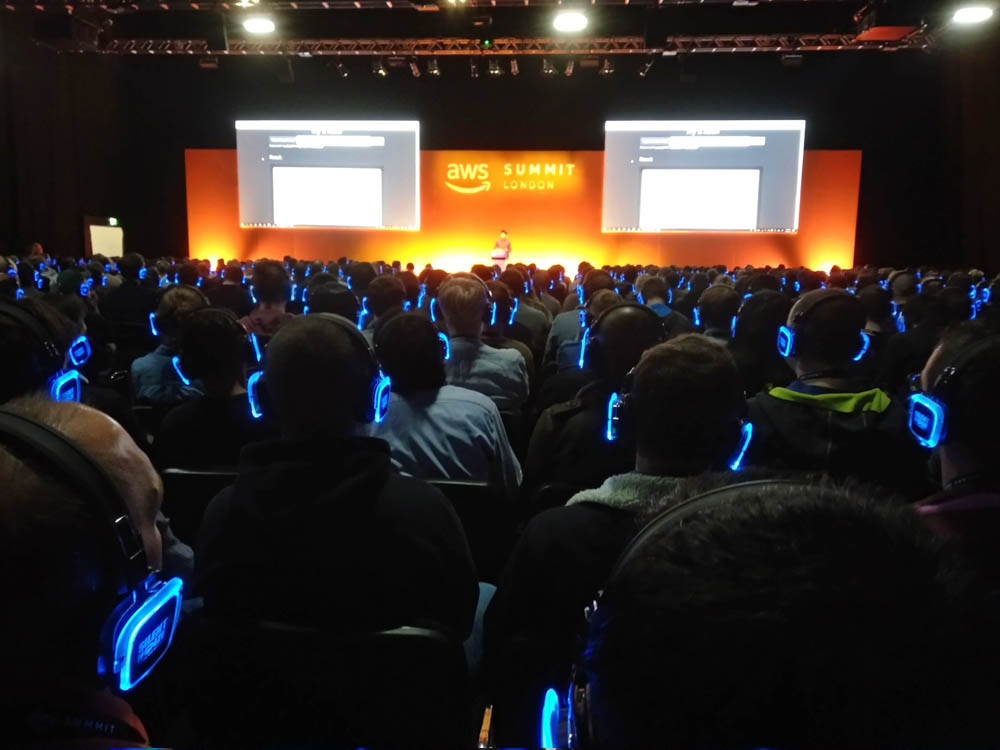 So GraphQL is an alternative to REST, originally developed by Facebook and now used in many other companies. The problem with REST is that when you request information about a resource, you get all the information about that resource, and may require multiple network calls to get the full graph of resources you need for a function. GraphQL lets you define a filter which can not only get all resources in one network call, it also can return only the attributes you specify. This can greatly improve performance and reduce the amount of data being returned. It's not ideal for all use cases though, mainly as you need the whole graph under your control for it to be possible. Definitely something I will keep watching, though, with a view to using in future. 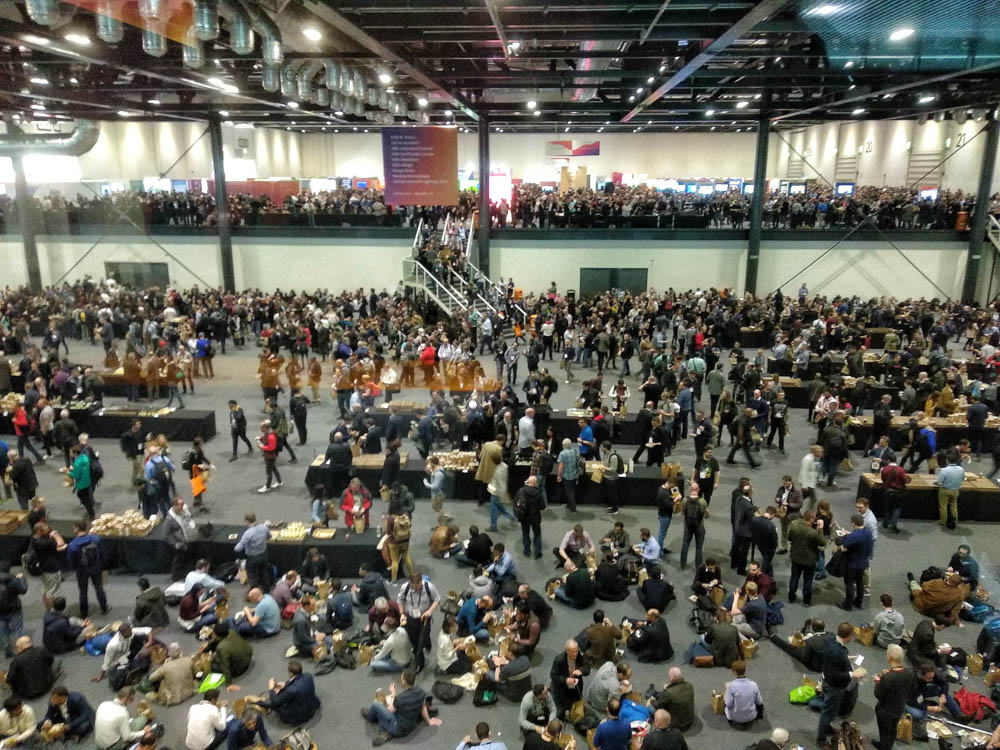 After that, I grabbed some lunch, which was really good given the number of people there. I joined the hordes sitting on the floor to eat it, finding a spot with a decent view over the auditorium for a few minutes of peace. Had to be quick, though, as I wanted to have a better look around the AWS village again. That was almost impossible though as just packed with people, like the ExCel itself. 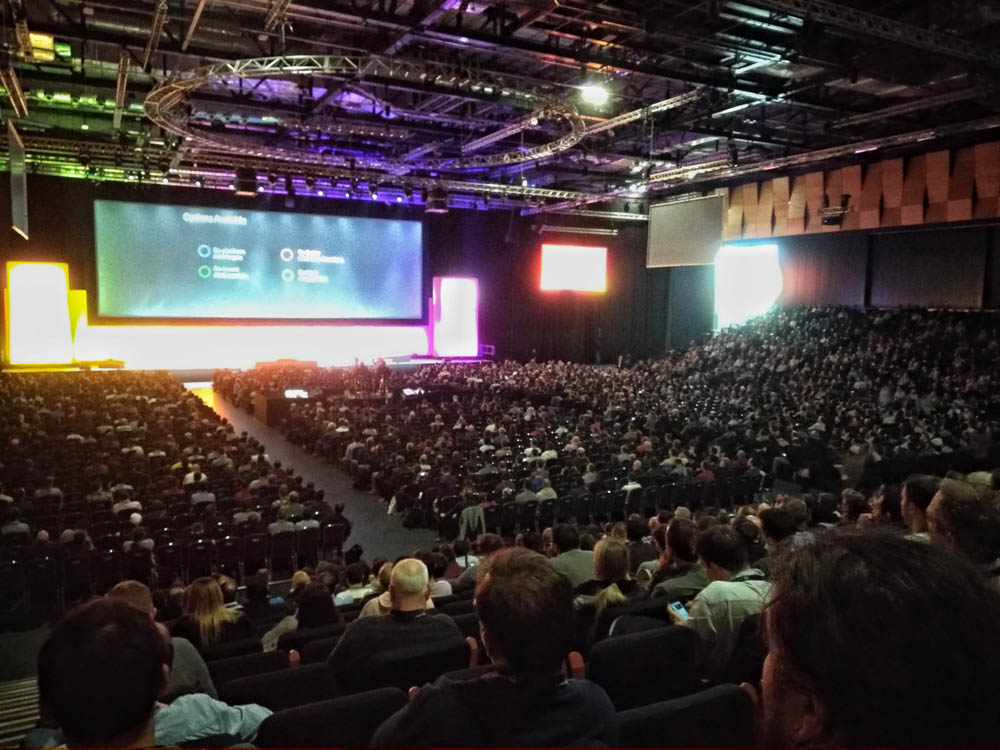 The next lecture about Architecture was in the main auditorium, so I thought I'd get there early. It's a huge theatre so I grabbed a seat up at the top at the back to get a good look around it. The hall had filled right up by the time the lecture started. It was interesting — again, just reinforcing what I already knew largely (which is great as it shows the team had been doing everything right before). I realized as the lecture was underway that although my seat gave a great view, it was going to take ages to exit the auditorium when the crowd left, so I got up and left again early to beat the rush to (a) get out, (b) get a coffee, and (c) pop to the loo before the queues started to form again.

As a Java (first) dev I really wanted to attend the lecture on Java on AWS — but I knew it would be tight to make it back to Euston for the train I wanted. I popped outside to get my bearings for the DLR, fully intending to go back in, but the weather was so nice, I couldn't face going back in and then fighting the rush later when more people would be leaving. So I left — a shame, but the right choice I think. 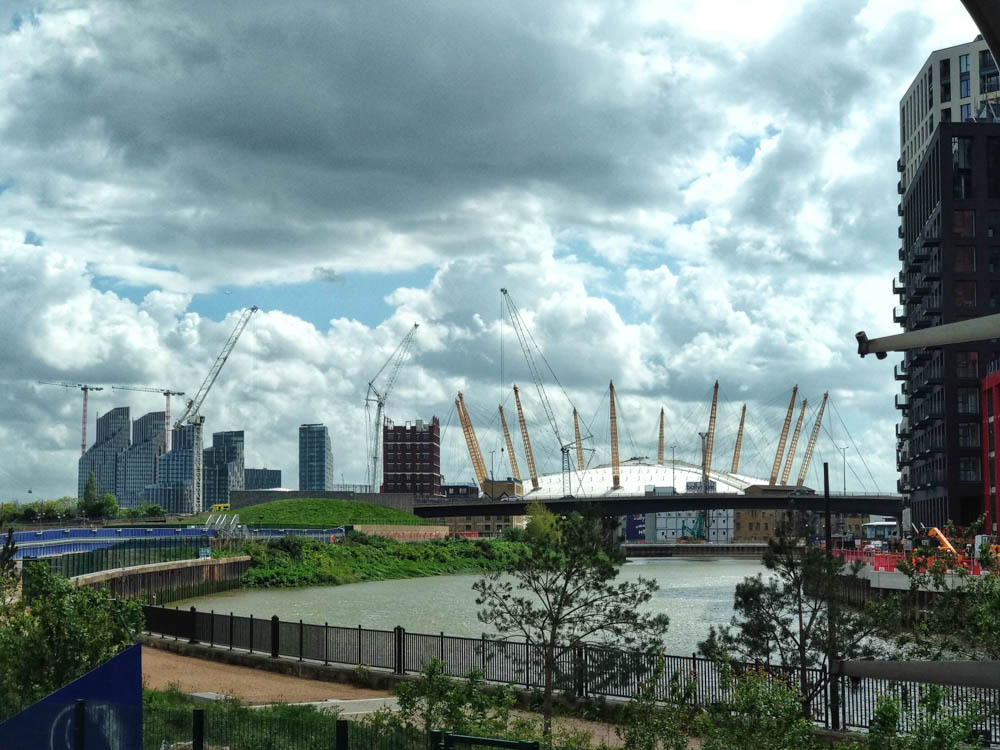 All in all a good day. The transport issues on the morning can't be helped — just one of those things. The only spoiler was the hordes of people. 12,000, allegedly. On top of the attendees from the other exhibit halls in the ExCel. All those people just ate into the time — time to get to a lecture, time to get out, time to get food, a coffee, the toilet — it was all just very rushed. At previous conferences I've always had time to grab some food, and just reset quickly between sessions, but none of that here as you were carried along in a sea of bodies most of the time with little time to digest what was going on.

Would I go back? I think I probably would. I think I'd plan to arrive earlier and hit the village before things start while it's still relatively quiet, and leave early again (or stay over and leave late). Also, grab some breakfast beforehand next time.