Most of our clients use AWS to reduce time-to-market following an agile approach. But AWS is only one part of the solution. In this article series, I show you how we help our clients to improve velocity: the time from idea to production. 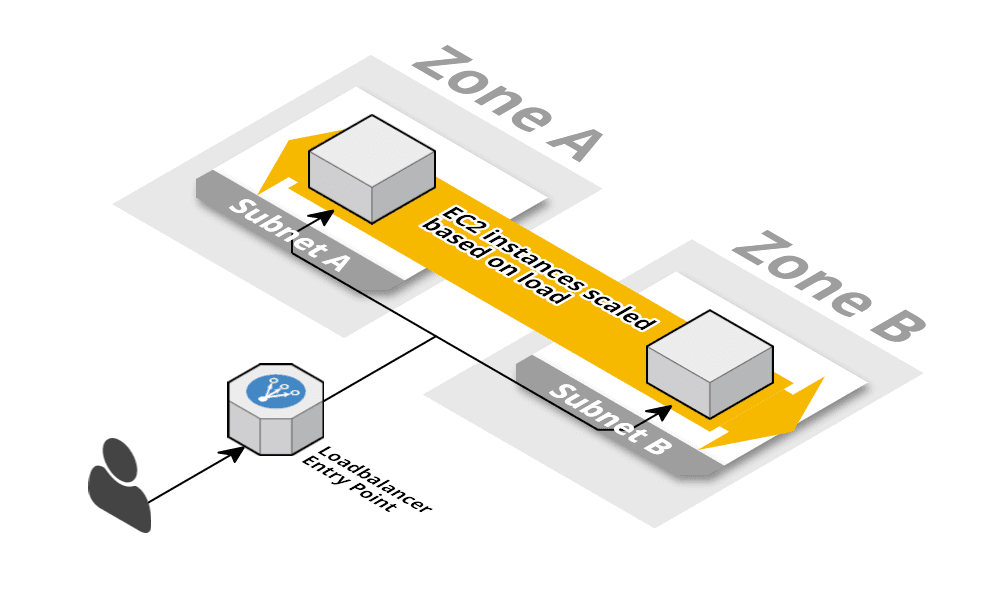 The diagram was created with Cloudcraft - Visualize your cloud architecture like a pro.

Let’s start simple and tackle all the challenges along the way.

A Single EC2 Instance Is a Single Point of Failure

In the Local development environment part of this series, you created an infrastructure folder which is empty by now. It’s time to change this. You will now create a CloudFormation template that describes the infrastructure that is needed to run the app on EC2 instances.

You can follow step by step or get the full source code here: https://github.com/widdix/aws-velocity

Create a file infrastructure/ec2.yml. The first part of the file contains the load balancer. To fully describe an Application Load Balancer, you need:

Watch out for comments with more detailed information in the code.

But how do you get notified if something goes wrong? Let’s add a parameter to the Parameters section to make the receiver configurable:

Alerts are triggered by a CloudWatch Alarm which can send an alert to an SNS topic. You can subscribe to this topic via an email address to receive the alerts. Let’s create a SNS topic and two alarms in the Resources section:

Let’s recap what you implemented: A load balancer with a firewall rule that allows traffic on port 80. In the case of 5XX status codes you will receive an Email. But the load balancer alone is not enough. Now it’s time to add the EC2 instances.

So far, there are no EC2 instances. Let’s change that by adding a few more parameters in the Parameters section to make EC2 instances configurable:

To make the template react differently to different parameter inputs, you need to add a few Conditions that will be used later in the template:

Now everything is prepared to describe the EC2 instances. You need:

And also create a fleet of EC2 instances in the Resources section:

Let’s recap what you implemented: A firewall rule that allows traffic on port 3000 (the application’s port). Depending on if you use the bastion host approach or not, an appropriate firewall rule will be created to allow SSH access. You also added an Auto Scaling Group that can scale between 2 and 4 instances. So far you have not defined what kind of EC2 instances you want to start, let’s do this in the Resources section:

So far, the number of EC2 instances is static. To scale based on the load you need to add

to the Resources section:

Let’s recap what you implemented: The Scaling Policy defines what happens when you want to scale while a CloudWatch Alarm triggers the Scaling Policy based on live metrics like CPUUtilization. The Auto Scaling Group will now keep a dynamic number of EC2 instances but always ensures that not less that two instances are running and not more than 4.

One thing is missing: Monitoring of your EC2 instances. Add

...to your Resources section:

The infrastructure is ready now. Read the next part of the series to learn how to setup the CI/CD pipeline to deploy the EC2 based app.

The AWS Velocity series is split into readable chunks. Subscribe to our RSS feed or newsletter to get notified when new articles become available.

The Docker's Power in the Cloud

Published at DZone with permission of Michael Wittig . See the original article here.