If you're just getting started with containers and want to run them on Azure, the number of options available can be overwhelming, especially with all the not-so-intuitive acronyms. There are many different options for hosting containers in Azure and all of them fill a specific need. Choosing the appropriate tool all comes down to understanding the benefits and use cases for each. In this article, we are going to take a look at the uses for each of the container hosting options in Azure.

If you're looking for somewhere to host a container (or containers) and don't need the services provided by an orchestrator, then the following Azure offerings may come in handy. 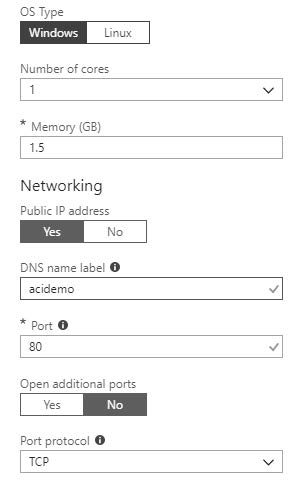 Azure Container Instances (ACI) has recently gone GA. This service offers containers as a first-class instance in Azure. With ACI, you use the portal or CLI to create a container — no need to worry about provisioning VMs to host the container or installing software. ACI instances can be created with a single-line CLI or PowerShell command and will be up-and-running in minutes. Where you need multiple containers talking to each other, ACI supports container groups, which allows you to run numerous containers together on the same host and local network. ACI containers can be configured with CPU and RAM to meet your requirements and support Linux and Windows containers.

ACI is a relatively new service and does still have some limitations, e.g. it is not yet possible to attach them to an Azure virtual network. Note that running an ACI instance 24/7 will be slightly more expensive than running a VM of the same size, and you're paying a bit extra for ease of use. This means that ACI is excellent for bursty load types or tasks that run on a set schedule. We'll talk a bit more about some of its bursting capabilities when we discuss orchestrators.

It's now possible to host a container within an Azure Web App. Containers for Web Apps is designed for hosting web server-based containers, and it is currently limited to running in Web Apps for Linux (and so only supports Linux containers), so you're looking at containers running things like Apache, NodeJS, Nginx, etc. Setting this up is as simple as creating a new web app and then configuring it to point to a container registry. With containers for web apps, you pay the standard price for the size of web applications you select; there is no additional cost for using containers.

As these are Linux containers only, you're limited to languages supported on this OS in particular. If you want to use .NET, then it needs to be .NET Core.

When you move beyond running a couple of containers and need to be able to control multiple containers that are running in production with resilience and high availability, then you need to start looking at using an orchestrator.

Once you have deployed your image, you have access to all the functionality of Azure functions for your event- or schedule-driven workloads. You also have the same limitations such as the ten-minute maximum execution time for consumption-based functions.

Azure Batch is Microsoft's solution for large-scale parallel batch processing. Classically, this involves spinning up virtual machines either from a gallery image and loading applications or a custom image. With containers for batch, we can now encapsulate all our application files inside of a container image rather than having to deploy them onto the gallery image or manage a full-blown VM image.

There is nothing stopping you from creating an Azure VM, installing Docker, and running your containers from there — and for dev and test workloads, this may be a good option. This approach, however, does mean you are on the hook for managing the underlying VM, updates, security, DR, etc. The Azure Docker Extension can be used to install Docker on the VM at deployment time.

When you move beyond running a couple of containers and need to be able to control multiple containers that are running in production with resilience and high availability, then you need to start looking at using an orchestrator. Again, there are numerous options for hosting orchestration tools in Azure.

ACS was the original container orchestration service in Azure. ACS allows you to create a container orchestration cluster running one of Docker Sware, Kubernetes, or Mesos. ACS is an interesting solution in that it is deployed like a PaaS service, but what gets implemented is a set of IaaS infrastructure (vNet, NSGs, virtual machines, etc.) that has been pre-configured to run your selected orchestrator. While the platform will set it all up for you because it is IaaS, you are still responsible for managing the VMs, updates, etc.

ACS is being replaced by AKS and will be removed around 12 months from the GA announcement of AKS. As such, I do not recommend making use of ACS for new workloads. Instead, use AKS or ACS engine (see below).

AKS is Microsoft's semi-managed Kubernetes service and is the replacement for ACS. Whereas ACS supported three orchestrators, AKS Microsoft made the (somewhat safe) bet on Kubernetes and this is the only orchestrator available. Where When you move beyond running a couple of containers and need to be able to control multiple containers that are running in production with resilience and high availability, then you need to start looking at using an orchestrator.

ACS deployed all IaaS infrastructure, AKS does offer part of the service as a managed PaaS offering. When you use an AKS cluster the Kuberntes master nodes are hidden from you and are operated by Microsoft, the only VM resources you see are the worker nodes, which are still IaaS and need to be managed and updated as usual. In AKS, you are only paying for the worker nodes, the managed part is free.

AKS is relatively new and is still in preview (with GA expected shortly). Because of this, it does not yet support all the features of ACS. In particular, Windows container support is missing. If you need Windows support, you would need to look at ACS engine.

I do not recommend making use of ACS for new workloads. Instead, use AKS or ACS engine.

ACS Engine is a toolset that both ACS and AKS are built on top of, and which has been open-sourced for anyone to use. With ACS engine, you can use JSON files to detail the configuration of your orchestrator, then run ACS Engine to have it generate ARM templates that you can then deploy to Azure. The result of ACS engine is a container orchestrator running on IaaS infrastructure that is all customer-managed (no PaaS service here). The benefit of ACS engine is that you can use it to create clusters that aren't currently supported in AKS — things like Windows containers, mixed Windows and Linux clusters, later or beta versions of Orchestrators, support for Orchestrators other than Kubernetes, etc. If you need to use any of these options that are not supported in AKS or you want more control over the orchestrator cluster that gets created, then ACS engine would be the choice for you.

Service Fabric is Microsoft's microservice platform, but it now also supports running and orchestrating containers. If you're purely looking at .NET applications, and you want to take advantage of some of the programming paradigms like reliable actors, then this is the platform to use.

While not running containers, there are also products that provide services that will be useful to you when deploying containers into Azure.

ACR is Microsoft's solution for private container registries. Using ACR, you can create a registry and then have your AKS cluster connect to it using Azure Role-Based Access Control. ACR also supports geo-replication, so if you are running multiple global clusters for DR or performance, then this provides an easy way to distribute your images.

Azure Files and Managed Disks have been around for some time and are used heavily outside the container world, but for containers, they provide useful tools for persisting data. ACI can make use of Azure file shares for persisting data, whereas AKS and ACS can make use of both Azure files and managed disks, giving options for increased performance for container storage with premium disks if required.

There is a good deal of options for deploying containers in Azure, and I suspect more will be coming in the future. It can seem a little overwhelming trying to decide which to use, but each does have its own niche, and with an understanding of this, you can determine which is best for your use case.

Which Azure Deployment Model Should You Use?