I'm presenting a session this weekend at SQL Saturday Manchester on how to deal with lack of SQL agent when moving to Azure SQL. This session looks at options in Azure for running regular jobs against SQL databases and usually focuses on using Azure Automation and Azure functions. However, just a couple of weeks before the event Microsoft released a new service that could also be used to fill this gap, SQL Elastic Jobs, and so I needed to squeeze that into my presentation last minute. While preparing my demos for the event, I came across some gotchas, so that is what we are going to look at this week.

You may have heard of Elastic Jobs before; there was an old Azure Elastic Jobs service that has been around for a few years; however, this service wasn't terribly useful. It was mainly aimed at dealing with sharded databases and required you to run things on premises. This service is being replaced by this new service, which runs wholely in Azure.

What Azure Elastic Jobs allows you to do is to write your DB maintenance tasks in T-SQL and store them in a job agent, and then have the agent run your job across multiple Servers, Databases and elastic pools, including databases in other subscriptions. You can run jobs as a one-off or on a schedule. 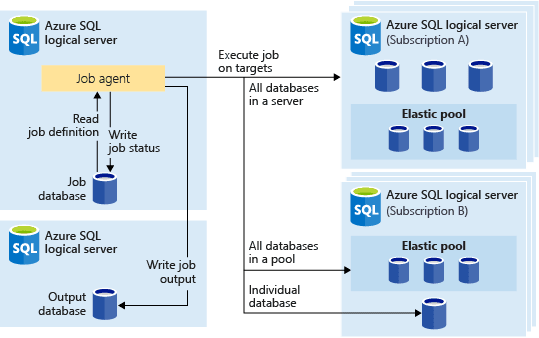 Before we get into how it all works, there are some limitations to be aware of before you decide to use this service:

Elastic jobs are based on the concept of a Job agent; this is just an Azure SQL database that you have transformed into a job agent. This means that the performance, scale, and cost of Elastic Jobs are entirely based on your choice of SQL database for your job agent. There is no additional cost for the service, just the DB cost.

The job agent DB must be at least an S0, basic SKU is not support, and S1 or above is recommended.

As mentioned, administration of this service is through PowerShell or T-SQL only. We are going to focus on using Powershell, as we can do everything with this if you use T-SQL. Some steps still have to be done in PowerShell.

Because this service is in preview the PowerShell cmdlets you need are not included in standard Azure Powershell; you need the preview version, and at the moment the preview version you need has a version number lower than the current GA version, which caused some issues with the instructions previously. To install this, you need to configure PowerShell to get pre-release version and then install the specific version we need. You need to run the following commands as an administrator.

Once that is done you should be able to run the command below and not get an error:

You also need to enable your subscription for the preview by running the following command:

It can take a while for the registration to complete, you can check on it by running this command:

Once the status comes back as "Registered", you are ready to go.

Now that we have the pre-requisites setup we can go ahead and start setting up our elastic jobs, this involves the following steps:

The Microsoft documentation on completing these steps is pretty comprehensive, so I won't rehash it here. Follow these steps and then come back to look at some more advanced items

In this example, we will look at running a query on all databases that gets the amount of fragmentation in each table and records this. The first thing we need to do is write our query that will get this data. We need to bear in mind that the results of this query will be written to the same table in output database for each target, so the query must have a unique reference to the target. In this example, we use the DB name.

Now we need to create our job; this is the same as the previous jobs we created

Where this differs is when creating the job task. Here we need to specify some extra parameters to connect to the output database:

When we run this job, it queries all the targets and writes the data to the output DB. If the account you are running the job as has rights it can create the output table for you if it does not exist, this is the easiest option. If that is not possible, you can manually create the table to match the results of your query, but it must also include an additional column called internal_execution_id  of type  UniqueIdentifier.

If your jobs fail, you can get some debug information from the job database. Using SQL management studio, you can connect to the database and open the job_task_executions table. This table shows each task execution, and if there are errors, they will be listed in this table. You can also look at the job_executions table to get the overall status of a job.

When a job fails it will retry a number of times before it fails completely.

Elastic jobs is a useful addition to the toolset that can be used to replace the SQL agent in Azure. It's still in preview and has some issues and limitations at the moment. In some respects being limited to T-SQL does have some limitations over something like Azure automation, especially if you want to manipulate other resources alongside Azure SQL, but as a pure replacement for SQL agent, it does show promise.

Presenting Azure vs. Working With Azure