just as change seems to be occurring at an ever increasing pace, so too do the various buzzwords and trends inflicted upon us.  whereas once social business was de rigueur, it appears that now the fuss has moved onto the future of work. 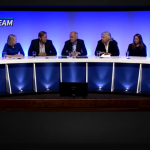 recently we had the fast forward 2030: the future of work and the workplace report from cbre and genesis, which was less about how work will look in 15 years time as what kind of workplace millennials would love to have right now.

hot on its heels is new ways of working by the wonderfully named b team.  if you haven’t come across them before, they’re a richard branson led project that is aiming to advance the wellbeing of the planet.  they have renowned faces such as mo ibrahim and muhammad yunus on board so they do carry a bit of clout.

the report details some of the driving forces behind the changing workplace.  in themselves, they’ve not really much of a surprise:

so far, so standard, and i’m sure you’ve seen and heard of many of these before.  where things get a bit more interesting however are in some of the implications of these drivers.

for instance, the report highlights the importance of having a life long growth mentality, both as individuals and as organizations.  so training and learning isn’t something you go on a course to do, it’s something you do every day.  pull versus push.

this continuous learning therefore has a direct impact upon the amount and level of feedback we will demand.  it’s no longer enough to have it restrained to set piece events a few times a year, but should be done regularly throughout the year.

the report also suggests that the sharing economy might step into the breach here through offering greater mentoring capabilities for people to tap into, with young people mentoring old just as much as old mentoring young.

another well trodden line of thinking from the report is that the org chart will cease to be relevant.  there have been no end of people predicting the demise of hierarchy over the last few years, especially as the likes of holocracy have gained in popularity.

the report is cautious in its support for such thinking, but does suggest that the flattening out of organizations will continue.

the report is very well researched, but it does paint an unabashedly rosy picture of the future of work.  only last week i attended an event at the rsa on the rise of self-employment, and whilst there were many of the same arguments aired that it is a liberating shift that is allowing people to fulfill their passions and so on, there were a number of speakers discussing the very real pitfalls of such a shift.

whether that’s the lack of any real welfare system for the self-employed (pensions, maternity pay etc.), the challenges of staying trained and skilled, the apparent drop in income across the self-employed market.

to many, that is the future of work, and it’s an uncertain one where platform owners become very wealthy, and the income of contributors gets pushed gradually down.

of course, such a future may not materialize, and it’s always difficult to predict anything with any certainty, but i’m not sure such a once sided exploration of that future is particularly helpful either.