Join For Free
The original name of this post was "a poor developer's guide to windows azure" but then I found the Bart Simpson's Chalkboard Generator:

My Azure story begins back in PDC08 where Microsoft announced a community preview of Windows Azure which includes a free subscription for a limited period. I took advantage of this to develop the Wcf binding box (which btw got some good reviews). A few months after, the preview has ended and my account became read only. I was not too bothered by it as I had other things in mind. A few weeks ago I had a crazy idea to build a wsdl2-->wsdl1 converter. The most natural way to do it was to create an online service. But my azure trial is already in freeze, and I did not want to pay a hosting service just to host a free contribution I make for the community. What could I do? I then remembered that I (and my contest winners) have a special MSDN premium Azure offer. And this is how wsdl2wsdl came to life. Veni, vidi, vici? Oh my...

A few days after going on air I get this email from Microsoft:


Your Windows Azure Platform Usage Estimate - 75% of Base Units Consumed‏

As a developer, it made too much sense to develop the binding box and wsdl2wsdl in a separate visual studio solutions. This yields two separate azure hosted services:

And this yields two separate bill items per day: 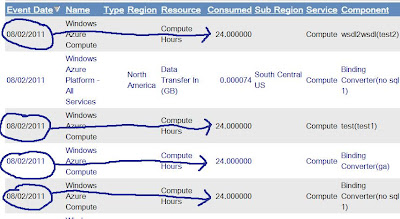 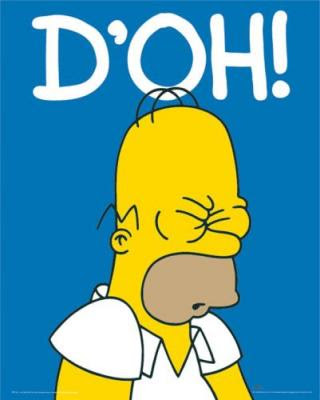 Now you may say RTFM. But nobody does it. Not when we download some open source library from the web, and not when we upload something in the other direction.

But why did the bill had 4 itmes and not two?

Not only did I had two hosted services online, but I also had two environments for each - staging and deployment. You pay for what you get:

I was on my way to a Chapter 11 when I decided to panically press the stop button on my unintended deployments:

However this does not reduce costs:


Suspending your deployment will still result in charges because the compute instances are allocated to you and cannot be allocated to another customer.

Remember: Always delete deployments you do not want to pay for. Suspending / stopping them still results in charges.

For applications with very small needs an extra small instance should be enough. It can save you costs by up to 60%! Configuring it is very easy:

I'll end the month on around 50$ which is not too bad for a commercial site. But for a contribution to the community and my fun? Oh my...

Weather you are an independent developer or a Fortune 5000 company - know the Azure pricing model and how your account fits in. SpreadsheetGear for ASP.NET and WinForms
Excel Reporting, dashboards from Excel charts and ranges, Windows Forms spreadsheet controls, Excel compatible charting, the fastest and most complete Excel compatible calculations and more.
azure