as we have now fully functioning thermal solution running on windows 10 iot core it’s time to focus to other components of our beer freezing solution. our solution measures and calculates metrics of cooling beer but it doesn’t report this data anywhere. in this blog post we will set up azure iot hub for our solution so it starts reporting measurements to microsoft azure.

we are using azure iot hub because it supports device-to-cloud and cloud-to-device messaging scenarios. in our case:

nb! from this point on i expect you have created empty azure iot hub on microsoft azure and it is ready for use. link!!!

when we add new device we have to register it in our iot hub. we have to do it in code. based on the registration device gets access token that is used to communicate with iot hub.

nb! you have to create new console application to register your device. the library you are using for this doesn’t support universal windows applications. it works only with full .net framework.

take the code from the azure iot hub documentation page: get started with azure iot hub for .net . here’s my simple code that worked from the first shot as soon as the connection string was correct.

before we can report measurements we have to make sure that we don’t run into time related issues with the sas token we are using to access iot hub. on windows 10 iot core for some reason, the clock is an hour or two behind. we have to set it to the current time using powershell.

for some reason my raspberry pi is not able to connect to the time servers, and i had to set the correct current time manually through powershell.

nb! we are using code from my previous beeriot posting . you can find startup class from the post . through previous postings, we have added new stuff to the original code, so make sure you go through the previous posts.

to keep things simple we add some new fields to the startup class.

as host, uri insert your azure iot hub url. you can find it in the essential information block on the hub main page. as a device key, use the key we got from the console application above.

to communicate with azure iot hub, we need a nuget package. add package microsoft.azure.devices.client to your background service project. 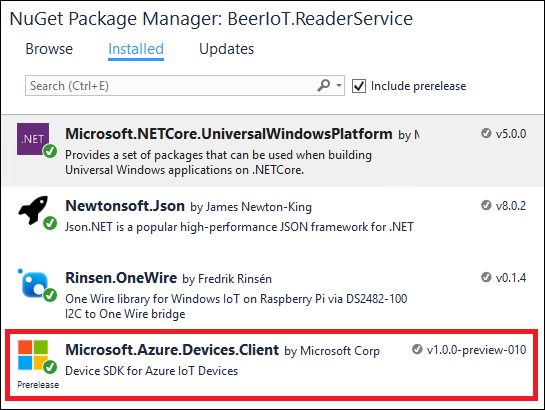 when service starts we have to connect to azure iot hub. it’s better to keep one client instance alive than creating one every time we have to report measurements. we'll add a new class level member to startup class:

when run method is called we instantiate this field:

nb! it’s important to use http1 as transport type because advanced message queuing protocol (amqp) is not supported in universal windows application projects yet...

when the timer elapses and the callback is called, we must call this method to report measurements to azure iot hub.

if there’s nothing wrong with the device id or azure iot hub host name, then all measurements will be reported to hub, and we should see a picture like this on our hub main page: 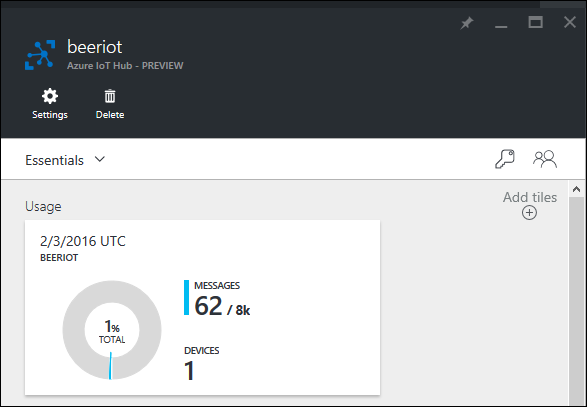 the number of messages doesn’t change immediately when new measurements are reported. just wait a few minutes and you will see changes in the numbers.

now we have our beer iot solution connected to azure iot hub, and all measurements are reported there. although registering the device was a little bit tricky, we did it by creating a console application. also, we configured our raspberry pi in a way that doesn’t deprecate sas tokens. but we still don’t see the data, and we don’t have any idea what’s going on. the next posts in this series will focus on displaying and visualizing data we gather from iot devices.