Before getting into how Behat functions, let's get into the question of what is Behat? Behat is a PHP based framework for Behavior-Driven Development or BDD. The simplicity of Behat lies in the fact that it can define all possible scenarios and behaviors in simple English steps of when and then. This is also known as the Gherkin format.

Now, let us start with setting up Behat on our machine. To set up Behat on your machine we will need to have the following prerequisites:

a) First, update the package manager cache by running the following:

b) Second, install the dependencies for installing Composer. We will need curl in order to download composer and php-cli for installing and running it. The php-mbstring package is necessary to provide functions for the library we will be using. Git is used by Composer for downloading project dependencies, and unzip is used for extracting zipped packages. Everything can be installed using the following command:

c) Composer provides an installer, written in PHP. Make sure you are in the home directory and retrieve the installer using curl.

d) To install Composer globally, use the following:

This will install and download Composer as a system-wide command named Composer, under /usr/local/bin.

e) To test your installation, run:

What Is Composer? How Do You Install It?

You don’t need to create this file manually – it’s easy to run into syntax errors when you do so. Composer auto-generates the composer.json file when you add a dependency to your project using the require command. Additional dependencies can also be added in the same way, without the need to manually edit this file.

The process of using Composer to install a package as a dependency in a project usually involves the following steps:

Now let us start off with adding the dependency for Behat in the composer.json file. Here are the dependencies that are required for installing Behat onto the system:

Now Behat is installed in the bin directory. Next, you have to execute the following command:

The init command initializes the current working directory with the ‘features’ directory. The features directory consists of the feature files. These feature files contain the pre-defined Gherkin steps to replicate user behaviors or carry out acceptance tests.

Once the basic set up is done the folder structure looks something like this. 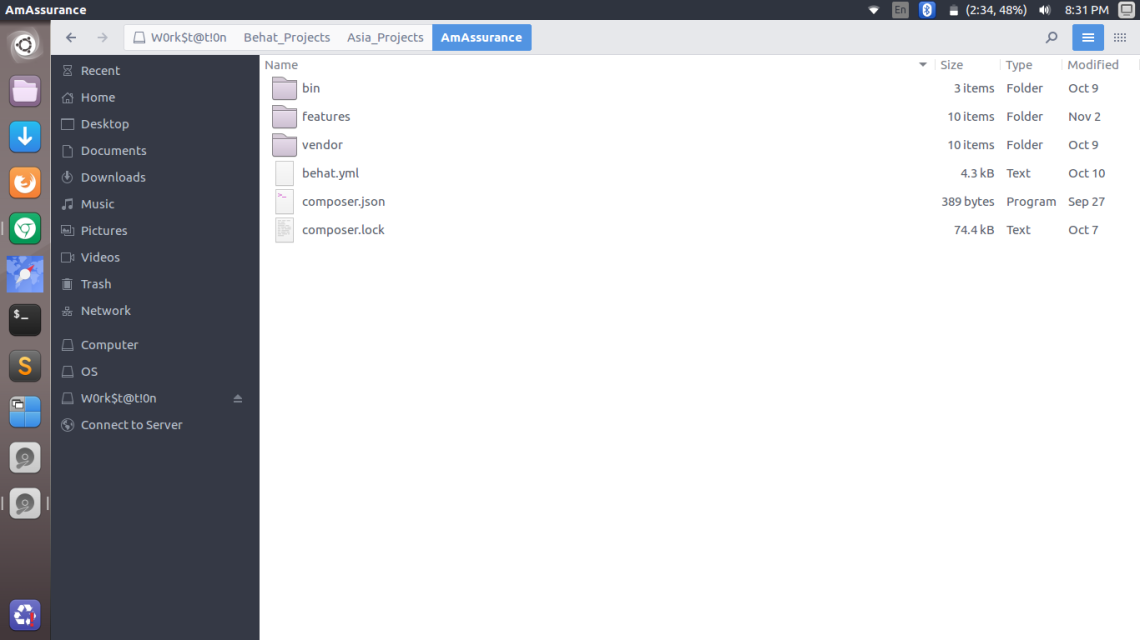 In order to be used by Behat, your context class should follow 3 simple rules:

Your context class is initialized before each scenario runs, and every scenario has its very own context instance. This means 2 things:

By default, Behat provides a set of Step definitions which you can see by just typing in the following command in the console:

This will enlist all the default step definitions available with Behat.

Setting Up the Configuration for Behat

Let's talk about how to set the configuration of your entire test suit in Behat. For that, we have a file named ‘behat.yml’.

All configuration happens inside a single configuration file in the YAML format. Behat tries to load behat.yml or config/behat.yml by default or you can tell Behat where your config file is with the --config option, as seen below:

All configuration parameters in that file are defined under a profile name root (default: for example). A profile is just a custom name you can use to quickly switch testing configuration by using the --profile option when executing your feature suite.

Context in the Behat Configuration File

Sometimes you may want to use a different default context class or provide useful parameters for the context constructor from your behat.yml. Use the context block to set these options:

For example, in the above snippet for the behat.yml, I have mentioned in two profiles staging and production. The profile for staging defines the tests to be run on the staging URL, where as the profile for production runs the required tests in the production URL. To run the tests on the specific profile we can use the following command:

The extensions block allows you to activate extensions for your suite or for a specific profile of the suite:

Gherkin is a line-oriented language that uses indentation to define the structure. Line endings terminate statements (called steps) and either spaces or tabs may be used for indentation (we suggest you use spaces for portability). Finally, most lines in Gherkin start with a special keyword:

The parser divides the input into features, scenarios, and steps. Let’s walk through the above example:

When you’re executing the feature, the trailing portion of each step (after keywords like Given, And, When, etc.) is matched to a regular expression, which executes a PHP callback function.

Every *.feature file conventionally consists of a single feature. A feature usually contains a list of scenarios. You can write whatever you want up until the first scenario, which starts with Scenario: (or the localized equivalent) on a new line. You can use tags to group features and scenarios together, independent of your file and directory structure.

Every scenario consists of a list of steps, which must start with one of the keywords Given, When, Then, But, or And (or the localized one). Behat treats them all the same. Here is an example:

Tags are a great way to organize your features and scenarios. Consider the above example. In the above example, if you check, I have used two scenarios @blackbox@1. The tag @blackbox signifies that any Scenario with this tag will be executed on goutte driver, a headless driver which is used to execute the desired tests. Using the tag @1 helps me in telling Behat which specific scenario I need to execute from a feature file.

A Scenario or Feature can have as many tags as you like, just separate them with spaces. To understand tags from the system’s point of view, they are basically metadata that help Behat in identifying separate executions. It also reduces excess effort when it comes to executing identical scenarios for the developer.

Behat doesn’t technically distinguish between these three kinds of steps. These words have been carefully selected for their purpose in order to make the steps user readable and identically distinguishable.

The purpose of Given steps is to put the system in a known state before the user (or external system). Avoid talking about user interaction in Givens. Givens are your preconditions. For example:

The purpose of When steps are to describe the key action the user performs or defining the state transitions. For example:

And or But steps can be used to allow your Scenario to be read more fluently. For example:

Where staging is the profile name defined in the behat.yml configuration file.

Note: To run your tests headless on phantomjs, you have to start the phantomjs-selenium server at port 8643. To start your phantom webdriver on port 8643, use the following command:

Phantomjs and Goutte are used to run all the scenarios headlessly, i.e you have to rely on your CLI to view the output.

Well, this part has been pretty rough when dealing with Behat version 3.0. The pretty HTML formatter has been deprecated in this version of Behat. But there is a very good plugin for generating HTML reports in Behat known by the name behat-html-formatter. The configuration is pretty easy. All you need is to include the dependency in your composer.json file. Once that is done, make configurational changes for the Behat-html-formatter plugin in the configuration file of Behat, which is behat.yml. All you need to include is:

Here are few of the screenshots for steps required to start with using Behat.

Initializing the Feature Folder Within the Directory 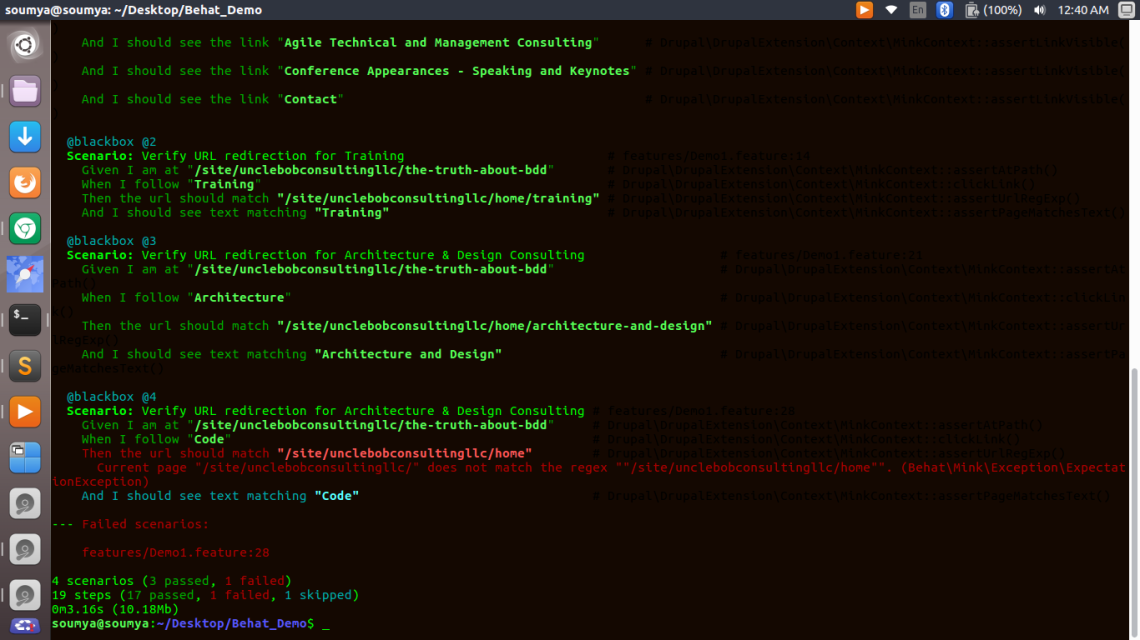 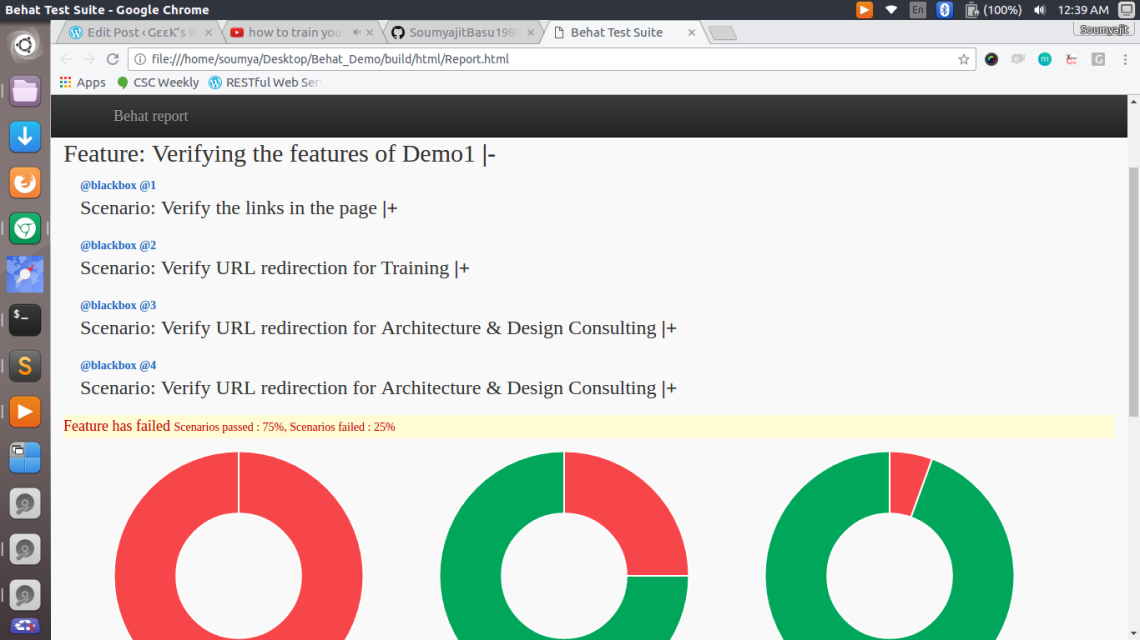 To know more and explore more on Behat you can check on my GitHub link.