The fifth installment of the State of Testing project has concluded with a comprehensive report that reviews what it means to be a QA professional in today’s dynamically technological changing environment.

The State of Testing, organized by Joel Montvelisky from PractiTest and Lalit Bhamare from Tea-Time with Testers, seeks to identify the existing characteristics, practices, and challenges facing the testing community in hopes to shed light and provoke a fruitful discussion towards improvement. The final report is translated into several languages and shared globally, further expanding the reach and impact this report has on all of us in the QA world.

This latest report (based on over 1,500 responses from over 80 countries worldwide) holds even more insight, as it is able to reflect on data from the previous surveys as well. Joel Montvelisky - The survey’s co-founder noted on some of the emerging trends:

“We are seeing a slow evolution of the testing function within the organizations, where testers are taking upon themselves additional tasks to provide value to the team, as well as some indications that some of the testing roles are starting to be done by our development peers. Still, the testing profession is far from being absorbed into the development roles, and we see great opportunities for experienced as well as new testers to thrive and expand in the world of testing.”

A notable trend is that more and more testers choose this career path deliberately, rather than being “accidental testers.” This 65% percent accounts for people who moved to testing from another position in their company (34%), wanted to be a tester and studied to become one (22%) or some who started as students and continued growing in the field (14%). In fact, only 21% of respondents to this year’s survey reported they had gotten into testing “by accident” (compared to 32% in 2017) 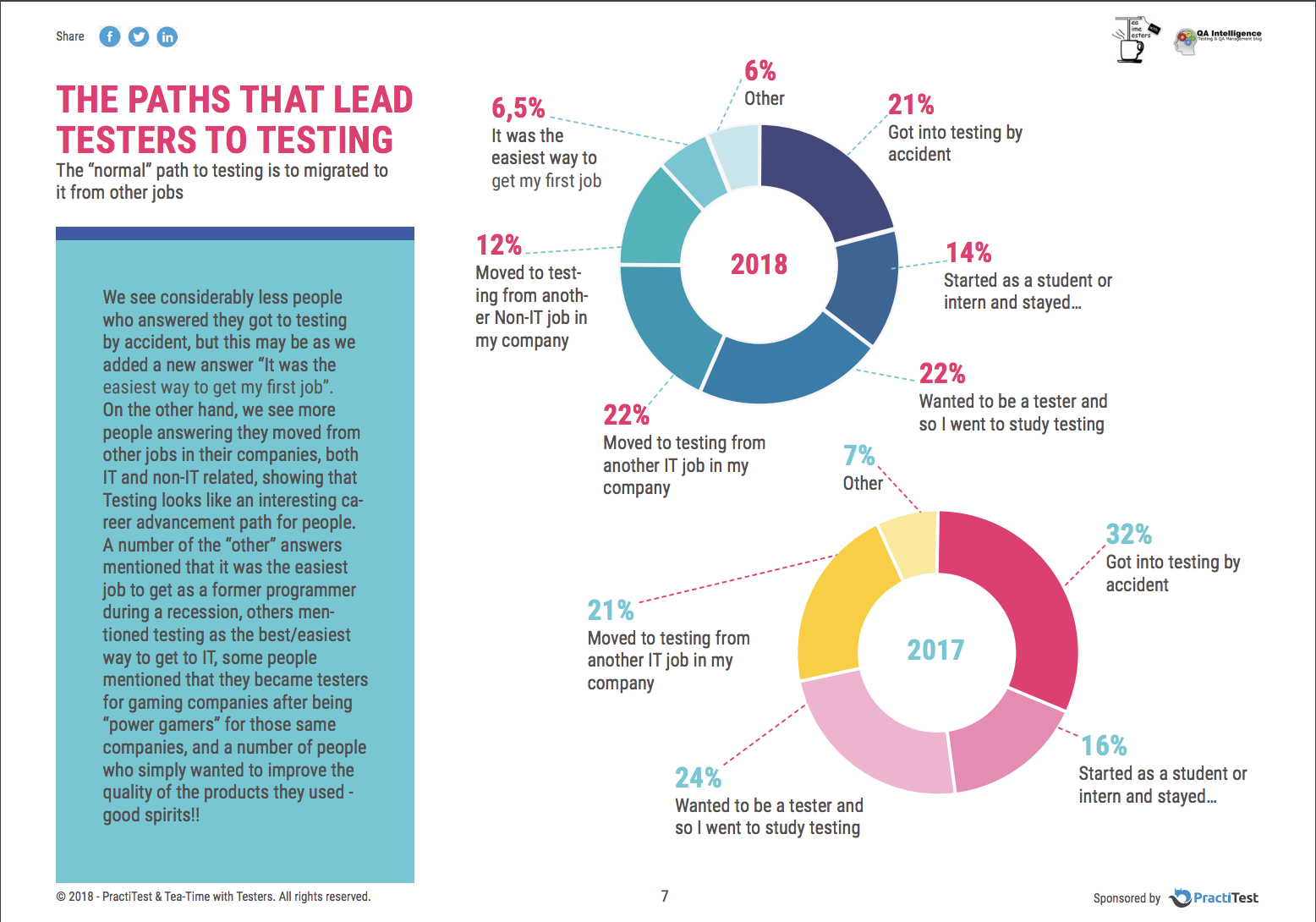 This trend is notable since it reflects that testing is becoming more recognized as a “proper profession” in the market, A job title that requires a skill set and training.

The report also includes interesting demographic statistics and salary charts based on years of experience and location. So, it will be interesting to see if a correlation exists between salary increases and the purposefulness of choosing software QA as a profession.

Another consistent trend shows that testing teams have continually decreased in size over the past 4 years. For example, in 2016, 60% of the respondents worked on teams of 15 testers or less, in 2017 this number was 70%, and this year it is up to 74% of respondents. 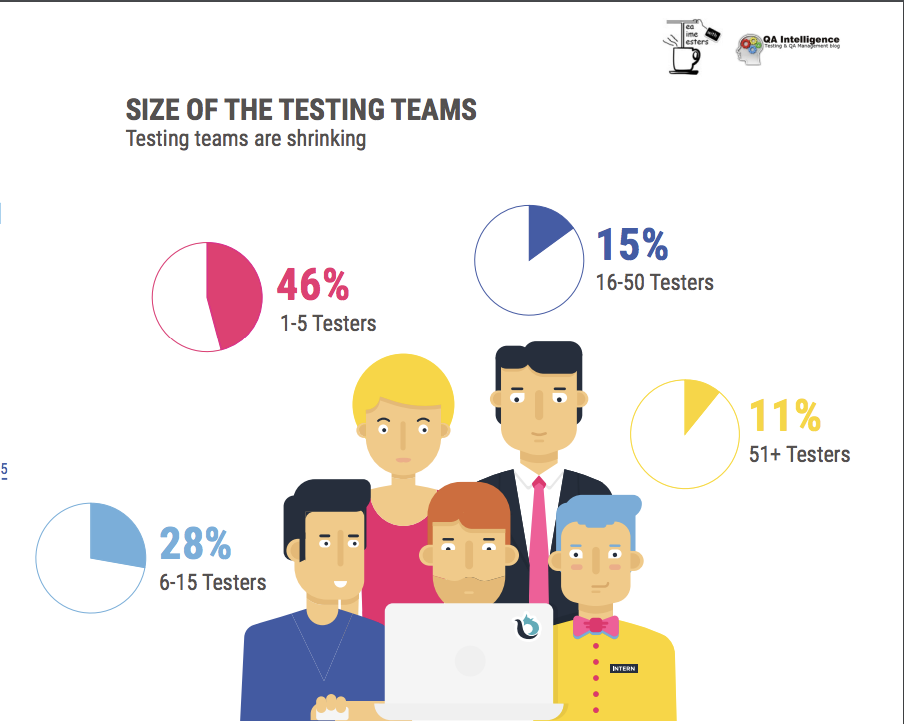 This, however, does not mean that the testing profession is “dying” as many so proclaim, it is merely diversifying. With the increasing adoption of Agile practices and CI/CD the testing function is becoming more integral to the development process rather than a “separate step”, and so actual designated “testing teams” are shrinking.

This is supported by a newly added question in this year’s survey, where respondents were asked to rate what percentage of time spent is actually dedicated to testing (rather than additional non-testing-related tasks).

While the vast majority of respondents reported that actual testing makes up for at least 50% of their time, the list of additional tasks shows some interesting jobs being handled by testers, such as:

Even with these changes, the top skills required by testers stayed more or less the same compared to the last 2 years. With communication being the undisputed skill needed by every tester, followed by Automation and Scripting, and General Testing in third place.

Looking into the future the report makes a few predictions of what the next “hot topics” will be, and where testers should start focusing their skills in order to not fall behind. These include Blockchain, IoT (Internet of Things), AI (Artificial Intelligence), serverless architectures, and many more.

Joel concludes, “The State of Testing project will continue tracking and analyzing these changes in order to give testers a head's up on the places where the value resides.”

This, of course, is just scratching the surface of what this year’s State of Testing report has to offer. Get a copy of the full report and read it for yourself.

Practitest is an end-to-end test management tool, that gives you control of the entire testing process - from manual testing to automated testing and CI.

Designed for testers by testers, PractiTest can be customized to your team's ever-changing needs.

With fast professional and methodological support, you can make the most of your time and release products quickly and successfully to meet your user's needs.