It is easy to think that letting users change all aspects of an app UI makes the UI better. We've all heard the "if they don't like it they can change it" argument. It is also very easy to come up with theoretical scenarios where users would actually want to change any one aspects of the UI.

Maybe some users don't want to star emails on gmail. Why doesn't Google let user to hide them? That would save valuable screen real-estate.

Making something user configurable is not a design "get out of jail card"!

The reason Google is not letting us remove the start is same reason that everyone should always keep in mind when building apps. Apps can't serve everyone and every use case. It is impossible and apps that try are doomed to suffer from massive usability problems. Apps should be designed to serve their target user group and serve them well. Apps should provide easy access for function that those users need to achieve their goals.

Don't try to target everyone. Select your core user groups and serve them well.

There are three very concrete problems that come up if app settings are not well thought out. 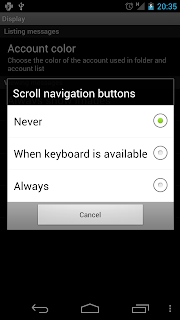 Should your user have to worry about this setting?
When thinking about app setting the question to ask is: "is this something my users should care about?". There are things that you must let users to set. Users should, for example, always be in control of your app's data usage. If your app is data use heavy you must let them go to wifi-only mode.

Then there are things that users should never have to care about. User interface should be configurable only in very rare cases. Do you think users should ever care about if buttons are part of a scroll pane or outside it?

Conclusion
When you're facing a tough interface design problem don't try to get the easy way out by pushing the decision making on users. We are the professionals, we are capable making good UIs. We should be making them.