“What all of us have to do is to make sure we are using AI in a way that is for the benefit of humanity, not to the detriment of humanity.” — Tim Cook

In the world of mimicking human emotions artificially, let's explore how AI can be applied to psychology.

Behavior is the data in the field of psychology. While Natural Language Programming helps with classification and sentiment analytics, Neuro-Linguistic Programming can help in identifying and analyzing the patterns in thinking and behaving. It can also provide recommendations for the betterment of humankind.

The key steps and key phases of a problem-solving approach in Data Science are applicable in the field of AI as well.

These are examples of speech recognition in artificial intelligence. Pattern recognition is the classification of data based on knowledge. Patterns are important to analyze, classify, predict, and forecast the behavior. This is widely used in speech/voice/image processing and recognition.

The application of pattern recognition is huge, varying from medical diagnosis to weather prediction.

Let’s understand the patterns in the world of Neuro-Linguistic Programming (NLP).

In her book, “NLP At Work: The Essence of Excellence,” the author, Sue Knight, writes, “Programming is the way in which we put these patterns of thinking, language and behavior together to get the results that we do — good and bad.”

Artificial intelligence is applied to predictive analytics by identifying the predictors that influence the target field.

Let’s take the example of suicidal prevention in clinical psychology. The target field is suicidal tendencies, and there can be numerous predictors both quantitative (size of family, income, living alone, education, time spent in social media, number of friends, usage of drugs, etc.) and qualitative (patterns in social media posting, withdrawal from society, personality changes, tone in their speech, body language, etc.). Some of the historical patterns, such as medical conditions, depression, and post-traumatic stress might trigger suicidal tendencies.

In artificial intelligence, the predictor parameters are known as neurons. The neurons are also known as nerve cells and receive signals via the dendrites and transmit information to other nerve cells, muscles, or gland cells.

To give an example, when a person is depressed, apart from mood changes, it sends signals to muscles, the digestive system, etc., which can cause joint pain and loss of appetite.

The power of neural networks depends on identifying the vital neurons. While Natural Language Processing helps the machine to understand and respond to commands in natural language, Neuro-Linguistic Programming aids in identifying cues from nonverbal communication.

In the example above, the depressed individual communicates through nonverbal language rather than talking a lot about suicidal tendencies. Neuro-Linguistic Programming works on the principle that every individual is unique and may have different preferences such as visual, auditory, and feelings in thinking and communicating. While it’s important to hear what the person says, it’s equally important to understand how they say it.

To understand the unconscious mind and patterns of the person who is in depression, Neuro-Linguistic Programming offers great concepts like ‘Metaphors.’ While the person may not be comfortable talking about how they feel, it’s relatively easier to communicate in a metaphorical way. It’s probably easier to say, “I feel empty, cold, and alone” than “I'm depressed.” Natural Language Processing comes into play once we have the metaphor identified to further classify and understand the sentiment.

Combining Them All Together 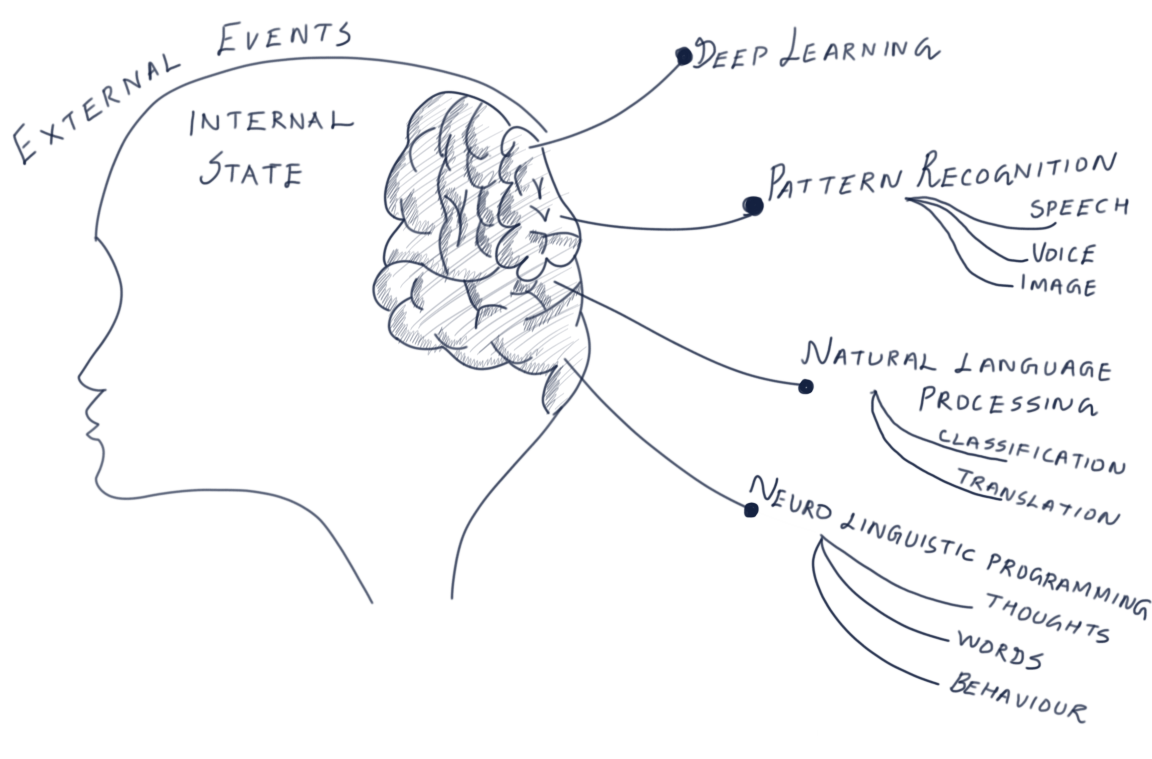 Neuro-Linguistic Programming helps in capturing thinking patterns, preferences, and how they communicate. Application of Natural Language Processing and other AI techniques on top of the collected unstructured information aid in achieving the target field (in our example, it’s addressing the suicidal tendencies of an individual).

Artificial intelligence goes beyond analyzing the neurons and understanding the relationship of them with the target field, it also provides suggestions. Neuro-Linguistic Programming aids through tools and techniques to achieve this in the field of psychology.

In our example, after understanding the pattern of the individual when we realize the person has a higher suicidal tendency, we can get help from some of the techniques that Neuro-Linguistic Programming offers:

The reference and excerpt on the techniques are from Sue Knight’s "NLP at Work: The Essence of Excellence."

In summary, Neuro-Linguistic Programming can help AI understand human behavior and the patterns in it. This serves as neurons to understand the target field and relationship with them, which is the core concept of artificial intelligence.