Over the last few years, we have been adding unit tests to our existing product to improve its internal quality. During this period, we always had the challenge of choosing unit vs. integration tests. I would like to mention some of the approaches we have applied to improve the quality of our existing system.

At its core, unit testing is about testing a single component at a time by isolating its dependencies. The classical unit tests have these properties: "Fast, Independent, Repeatable, Self-Validating, Timely". Typically in Java, a method is considered a unit. So, the traditional (and most common) approach is to test the single method of a class separated from all its dependencies.

Interestingly, there is no straight definition of what makes a unit. Many times a combination of methods which spread across multiple classes can form a single behavior. So, in this context, the behavior could be considered as a unit. I have seen people breaking these units and writing multiple tests for the sake of testing a single method. If the intermediate results are not significant, this will only increase the complexity of the system. The best way to test a system is to test with its dependencies wherever we can accommodate them. Hence, we should try to use the actual implementation and not mocks. Uncle Bob puts this point very well, "Mock across architecturally significant boundaries, but not within those boundaries..." in this article.

If the software is built using a TDD approach, it might not be a challenge to isolate dependencies or add a test for your next feature. But, not all software is built like this. Unfortunately, we have systems where there are only a few or no tests written. When working with these systems, we can make use of the above principle and use tests at different levels. Terry Yin provides an excellent graphic (which is shown below) in his presentation titled Misconceptions of unit testing. This shows how different tests can add values and what the drawbacks are. 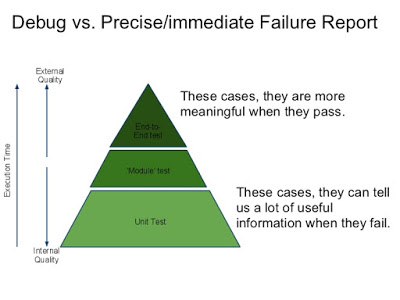 Many of our projects use Java and the Spring framework. We have used springs @RunWith and SpringJUnit4ClassRunner to create AppLevel Tests which gives you the objects with all its dependencies initiated. You could selectively mock certain dependencies if you would like to isolate them. This sets a nice platform to write unit tests with multiple collaborating objects. We call them App level tests. These are still fast running tests with no external dependencies. A different term was chosen to differentiate this from the classical unit test. We also had Integration tests which would connect with external systems. So, the overall picture of developer tests can be summarized as below:

This approach gives the developers the ability to choose the right level of abstractions to test and helps in optimizing their time. Nowadays, my default choice is App Level tests and I go to unit tests if I have a complicated logic to implement.

Published at DZone with permission of Manu Pk. See the original article here.