In Network Analysis the identification of important nodes is a common task. We have various centrality measures that we can use and in this post we will focus on the Betweenness Centrality. We will see how this measure is computed and how to use the library networkx in order to create a visualization of the network where the nodes with the highest betweenness are highlighted. The betweenness focuses on the number of visits through the shortests paths. If a walker moves from one node to another node via the shortests path, then the nodes with a large number of visits have a higher centrality. The betweenness centrality is defined as

where s(s,t) is total number of shortest paths from node s to node t and sv(s,t) is the number of those paths that pass through v.
Let's see how to compute the betweenness with networkx. As first step we have to load a sample network (yes, it's the same of this post): Now we have a representation G of our network and we can use the function betweenness_centrality() to compute the centrality of each node. This function returns a list of tuples, one for each node, and each tuple contains the label of the node and the centrality value. We can use this information in order to trim the original network and keep only the most important nodes: And we can use the original network and the trimmed one to visualize the network as follows: The graph should be like this one: 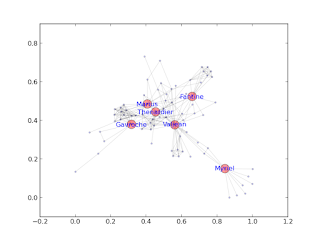 This graph is pretty interesting, indeed it highlights the nodes which are very influential on the way the information spreads over the network. In the sample network we used each node represents a character and the connection between two characters represent the coappearance in the same chapter of the book 'Les miserable'. Looking at the graph we can easily say what are the most important characters according to the Betweenness Centrality. We can also observe some interesting situations like the ones of Valjean and Myriel. They are to connected to groups of characters who don't have a direct connection with the main ones.