Big data has proven remarkably effective at predicting a great many things in recent years, but perhaps one of the more maudlin examples comes via a recently published paper from the University of Florence, which used big data to predict the likelihood of war.

The researchers wanted to test the hypothesis that war is just something mankind does, it's hard-wired into us to fight one another, and therefore war should be something we can expect to occur reasonably consistently.

The researchers began by compiling a list of war fatalities each year between 1400 and 2000. The team then examined the statistical characteristics of this data to try and find clear signatures that are common in network phenomena, whether concerning the popularity of websites or in the size of disease epidemics. Most occurrences are very small, but a small number are enormous. It's a power law in action.

Perhaps not surprisingly, violent conflicts also followed this power law signature. The vast majority over time have been very small, but a few have seen millions of casualties.

This is valuable as it allows researchers to use the same kind of network analysis on wars as they use to try and predict other complex phenomena. Indeed, it can even provide some insights into why wars tend to start in the first place.

For instance, whilst historians usually focus their attention on certain specific events that they believe trigger war, the actual data suggests that trigger events don't have a strong influence on the size of that conflict.

Perhaps a better analogy is of a forest fire, as these fires are seldom predicated by the spark that triggers them. Instead, it's a much more complex interaction between trees that inevitably varies in an unpredictable manner. Wars have equally complex factors, be they political, social or economic tensions that trigger each conflict.

The researchers wanted to test the claim that society is more peaceful, something that's made in widely cited data. 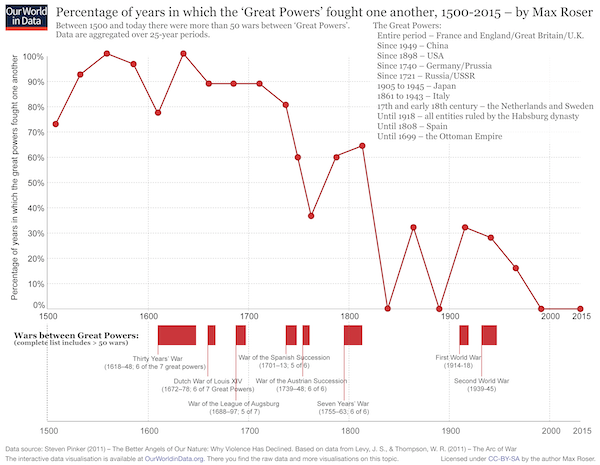 The researchers believe this might not be entirely accurate, however, and believe that whilst wars have become less common, that doesn't mean their overall destructiveness has lessened.

Obviously, there is a prolonged period of peace since the end of the Second World War, and whilst many believe this a sign of a more peaceful society, there remains a degree of doubt. Indeed, a second study suggested that our current peace would have to last for 100 years before it's a sign of meaningful change.

The Florence team shared this scepticism and believe that the patterns of war throughout human history suggest that our current peace may be disrupted sooner than we think. Hopefully in this instance, the data is wholly wrong.