Shown below is a typical example of a binding pattern where fields name and age of the Person type record named tom are being matched and assigned to variables named firstName and personAge.

The above code will produce the below output in which we can see that the newly created variables can now be utilized independently and that they carry the expected information derived from the Person type record named tom.

Shown below is an example of the simplest form of a binding pattern. It consists of just the type and the variable name, in this case, int and a.

In the below example var is used instead of the type. In such a case, the type will be inferred from the expression on the right-hand side, in this case from 2.

The below example denotes a binding pattern involving a structured type where the structured type is a tuple and the types of members in the tuple are defined as int and string. As opposed to the above examples, we can see that there are two separate variable names here: x and y. These variable names correspond to the types of the members defined in the tuple type, x as having int type and y as having string type. This creates two separate variables: x of type int and y of type string and the members of the tuple type value in the right-hand side expression will be assigned to x and y in their order of occurrence.

There are 2 ways in which typed binding patterns can be used:

The iterative approach is always followed by the in keyword. In this approach, an iterator gets created as a result of evaluating an expression, and the typed binding pattern is matched against each value returned by the iterator. The in keyword can be used with foreach statement, join clause, from clause, and with let expression.

The below example depicts an iterative approach using the foreach statement. In this case, the typed binding pattern is the [int, string] [i, v] portion where the type is [int, string] and the variable names are i and v.

Binding patterns in Ballerina can be mainly classified into 2 separate groups:

The below image illustrates a high-level classification of binding patterns in Ballerina. 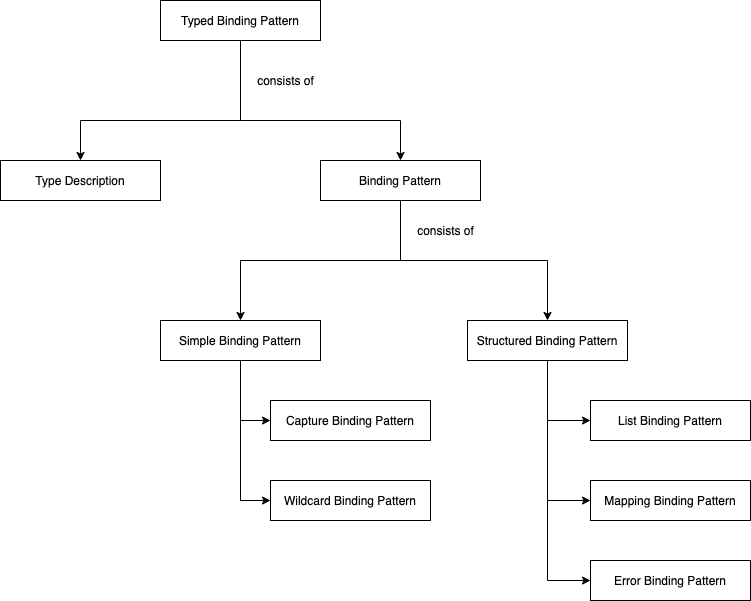 Discussed below are a few examples of the different ways in which the capture binding pattern can be used.

Unlike in the previous example, since var is used here instead of the type, the type of the capture binding pattern will be inferred from the expression on the right side — in this case from true.

In this example, the inferred type of the capture binding pattern will be int|error, not just int. This is because int:fromString("abc") is bound to result in an error. In such a case where the intersection of error and the inferred type, which in this case is int is nonempty, f gets assigned an error.

In the below example since the value text of string type cannot be matched with the type of the capture binding pattern which is int, the match fails and it results in a compilation error.

Discussed below are a few examples of the different ways in which the wildcard binding pattern can be used.

In the below example, since the basic type of value true is boolean and it also belongs to the any type, this will not cause an assignment and the value will be ignored.

In this case, as in the previous example since the basic type of the value returned by testFunction() is of int type and it also belongs to any type, this will not cause an assignment and the value will be ignored.

The type of the wildcard binding pattern in these examples will be derived as any as they result in a successful match.

Since the value we are trying to ignore here is of type string and it belongs to any type, this will not result in a compilation error.

These examples will result in compilation errors since the basic type of the value attempted to be matched is error and error type does not belong to any type.

Discussed below are a few examples of the different ways in which the list binding pattern can be used.

Shown below is an example of an array binding pattern. The 3 resulting variables score1, score2 and score3 can be used independently given that it results in a successful match.

This example will result in a compilation error as destructuring the value to separate variables is not possible with open arrays without having a rest binding pattern (...v).

Unlike the previous example, this is possible because of the "rest binding pattern" ...allScores. Thus, the allScores variable will be of type float[].

Shown below is an array typed binding pattern used in an iterative approach. The int val portion is the array binding pattern, and in each iteration, values in the array arr will be bound to val.

Shown below is an example of a tuple binding pattern. As discussed with the array binding pattern, the variables a1, a2 and a3 can be used independently.

This example will not result in an error since the number of members in the value [["text", 4]] is less than the number of binding patterns, and since the float type has a filler value (0.0), the value for a3 will be 0.0

This is an example of a tuple binding pattern being used in an iterative approach. In each iteration, values in the tuple tempTuple will be bound to val.

For more examples on list binding patterns refer to [1].

In Case 1 the mapping binding pattern binds the fields named id, fname and lname with the variable names personId, personFname and personLname, and causes the record value {id: 123, fname: "Jhon", lname: "Doe"} to be matched to it.

The below example shows the recursive destructuring nature of mapping binding patterns. In this example, person of record type Person is assigned to field personalInfo of Person type in student record of Student type. In such a case, upon a successful match, the mapping binding pattern binds the studentId field with variable stuId and person will also be destructured further, thus the recursive nature. In destructuring person, its fields id, fname, and lname will be bound with variables personId, personFname and personLname.

The below example depicts a few scenarios with invalid mapping binding patterns. Notice that in this example the Person record is a closed record.

Case 1 example will result in a compilation error (ERROR: unknown field 'age' in record type 'Person') because it contains a field named age which is not in the Person record type. However, this error would not have occurred if Person was an open record.

Case 2 example will result in a compilation error (ERROR: redeclared symbol 'personLname1') because  personLname1 has already been declared in Case 1.

In this example, the var {id: deptId, name: deptName} portion is the mapping binding pattern. It is being used in an iterative approach with query expressions. The mapping binding pattern used here binds the field names id and name with the variable names deptId and deptName for every value in deptList. As a result, we are able to utilize variables deptId  and deptName independently in places like on person.id equals deptId and dept : deptName.

The below example shows a mapping binding pattern that involves map type in an iterative approach. It binds every field in m with the variable named val.

This example depicts a mapping binding pattern that involves a record type in an iterative approach. It binds every field in person with the variable named val. Since var is used here, the type will be inferred from person.

You can also refer [3] for more examples of error binding patterns.