One of the things that we do on a daily basis is use Maven to build our projects by issuing build commands such as mvn install. Maven then looks at our project’s configuration file, affectionately known as a POM, magically figures out what do and, hey presto, your build is complete. I imagine that we do this so often that we never think about what’s going on behind the scenes, and in some cases without ever understanding what’s going on either. This blog takes a bird’s eye look at the Maven build lifecycle and reveals what happens when you issue commands such as mvn clean install.

If you’ve ever looked at the Maven documentation you'll have read that Maven is all about a hierarchical object oriented build structure. In this there are three main artefacts: build life-cycles, build phases and goals, so a good place to start would be to explain the relationship between these terms. Take a look at the following UML diagram: 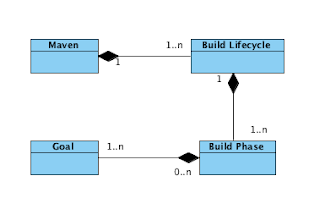 A good way of defining a build phase is to give an example. The Maven documentation lists what’s called the default life-cycle and here are its build phases:

Hence, we can define a build phase as something that takes care of one part of a build life-cycle, for example compiling or testing your project.

You can tell Maven to build your project by specifying a build phase on the command line. For example:


...means “carry out all build phases up to and including install phase in the default build life cycle”.

From this you can deduce that issuing a

So, what are goals? In the Maven world a goal can be defined as a single task or job that actually does something concrete towards getting your project built. If we compare Maven to the company you probably work for, then the life-cycles would be the board of directors, the build phases the middle managers and the goals the workers who get the job done.

You can also bind your own goals to phases using the <plugin> element in your POM file, this can be used to either override a goal’s default behaviour or to add new goals and new behaviour.

A final point to note on goals is that they are usually associated with your POM’s package type. This makes sense as, for example, the compiler:compile goal is associated with jars and ejb packaging, but would be meaningless in terms of the POM, wars or ear packages.

In reading this, you may have gathered that by convention the names of goals contain a colon, whilst the names of build phases don’t. This allows you to specify goals on the Maven command line without confusing them with build phases. For example:


...will carry out the compiler:compile goal, which is in the compiler build phase of the default build lifecycle. And, mixing things up at bit...


...will carry out all build phases up to and including install in the default build life cycle followed by the tomcat:redeploy goal found in the Tomcat Mojo.

And that’s the mile high, bird’s eye view of Maven.

1HAS in the UML sense of the word.