The ‘Black Magic Probe’ (or in short: BMP) is a very small and open-source JTAG/SWD debug probe with a built-in GDB Server. I saw that probe referenced in different places, so I thought I would try it out with a few of my NXP LPC and Kinetis boards: 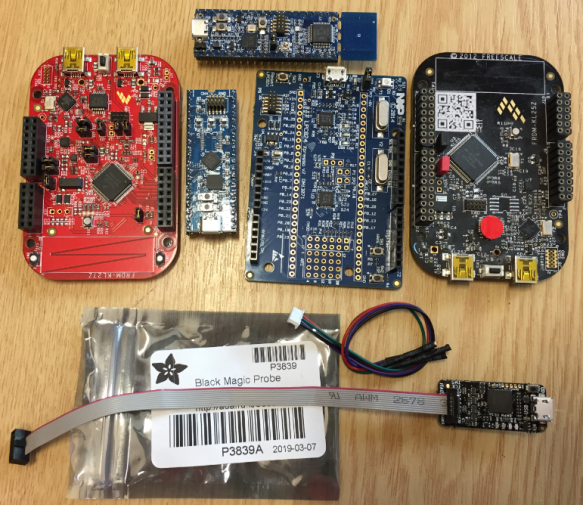 BMP with LPC and Kinetis Boards

The probe is designed by 1BitSquared in collaboration with Black Sphere Technologies and is open source. It runs on ‘native’ probe hardware (which I bought), or the firmware can be programmed on different STLink hardware.

I ordered the BMP from Adafruit ($60 USD). The probe comes as a very small board (35x15mm), and the kit included the 10pin SWD cable and a 4pin UART cable. The probe includes a UART-2-USB CDC functionality, so this is definitely a plus.

I wanted to try it out with Eclipse and see if it would be a good fit for my projects or for student projects. Here is what I have used:

Be aware that only a few target and devices are supported by the BMP! Make sure your device is listed! But if the device is listed might not mean that every package or derivative is supported, so better check.

The board enumerates under Windows with two serial ports (the first one is the debug port, the second one the UART-2-USB port).

Because my probe already has the latest firmware, I did not update it with the ‘Black Magic Firmware Upgrade’. For more details, see this link. The DFU utility is available on http://dfu-util.sourceforge.net/

I did not had the time to try out the ‘Black Magic Trace Capture,’ which looks interesting, but it seems to be experimental. More information can be found in this link.

While different from other GDB JTAG/SWD with the client/server concepts, this probe already implements the GDB server inside the probe. So instead of connecting to a (local or remote) GDB server, I connect to the (first) serial port (in my case: COM80), which probe implements. On one end this makes things simpler (no need to provide or run the server binary which needs to be implemented for each host), on the other side it makes it less flexible (so no remote debugging except through COM port sharing).

So instead of connecting from the GDB to a USB or TCP port, I have to connect using the gdb command:

To make things a bit strange, it requires a ‘\\.\’ prefix on Windows if the port number is >10 (which is the case on my machine):

I recommend to run the probe first with the command line gdb, and after this works, move up to using it with Eclipse.

Make sure that the GDB version used is from the *same* toolchain/gcc, which was used to build the binary! A mismatch of gcc and gdb can cause strange failures!

Using the GNU ARM toolchain in the MCUXpresso V11.0.0, the GDB is located in (adapt to your installation path):

Allow gdb to access memory outside of the memory map:

Connect to the port of the BMD:

Use ‘monitor help’ to get a list of supported monitor commands:

Scan the SWD chain for targets:

Which gives for the FRDM-KL25Z:

Attach to the first device in the list (the second one for the KL25Z is an artificial one for flash recovery):

Then load the binary with the following:

Then ‘kill’ the program, which will reset and run the target:

Finally, I can now exit the GDB with: 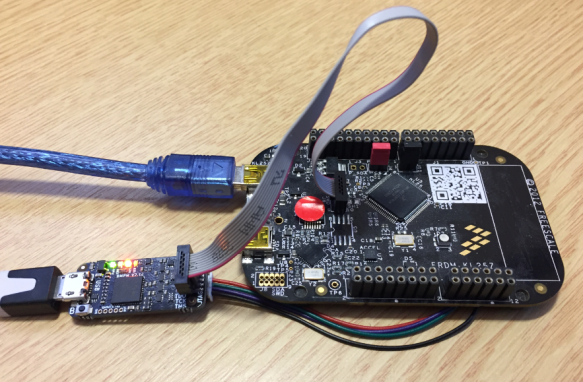 With these steps, I have something I can automate. I can put this into a script file:

And then, I can call gdb with that script:

With having a working setup using command line tools, it is now time to do the same with Eclipse — in my case, with the MCUXpresso IDE.

First, create a new debug configuration for the project under ‘GDB Hardware Debugging’:

In the ‘Debugger’ Tab, point to the gdb executable with ‘use remote target’ unchecked: 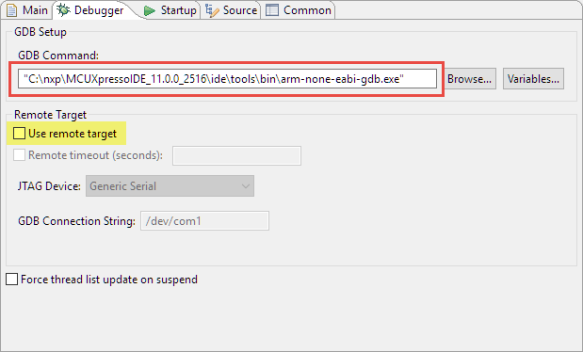 In the ‘Startup tab,’ use the following settings (adapt to your COM port):

With this, I can use Eclipse and source-level debug the board: 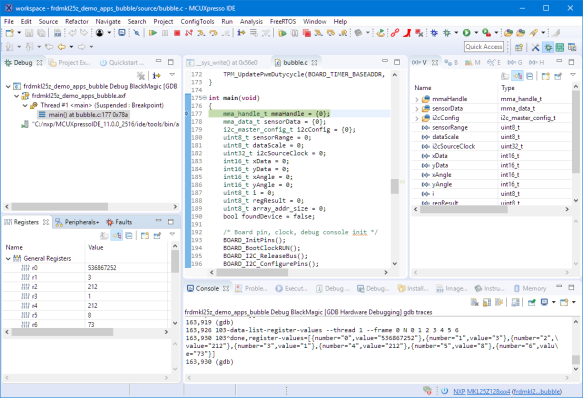 Debugging with BMP and Eclipse

The KL27 is supposed to be supported, but the probe only reports a generic ARM Cortex-M:

Most of the time, it fails with:

GDB gave a hint about the following:

But using ‘file’ failed too:

This sounds like a problem of BMP firmware, but I had no time to investigate further.

The Black Magic Probe implements a GDB server on the probe itself. I managed to get it working with the FRDM-KL25Z both in command line mode and Eclipse. The probe is rather expensive compared to the $20 USD of an NXP LPC-Link2 or 20 Euros for a Segger J-Link EDU Mini, but on the other side, this supports an open-source development, so I’m OK with it. The included UART-2-Serial converter is a plus. Flash programming (compared to other probes), at least for Kinetis, is slow.

I had it working quickly for the Kinetis KL25Z (FRDM-KL25Z) board but failed to get it working with the NXP LPC boards I tried. If I find a solution, I’ll update this article with it.