from the get go, ravendb was designed with sharding in mind. we had a sharding client inside ravendb when we shipped, and it made for some really cool demos.

it also wasn’t really popular, we didn’t implement some things for sharding. we always intended to, but we had other things to do and no one was asking for it much.

that was strange. i decided that we needed to do two major things.

before our changes, in order to use sharding you had to do the following:

all in all, you would need to write a minimum of 3 classes, and have to write some sharding code that can be… somewhat tricky.

oh, it works, and it is a great design. it is also complex , and it makes it harder to use sharding.

instead, we now have the following scenario: as you can see, here we have three different servers, each running in a different port. let us see what we need to do to get us working with this from the client code:

first, we need to define the servers (and their names), then we create a shard strategy and use that to create a sharded document store. once that is done, we are home free, and can do pretty much whatever we want:

what you see here is the code that saves both companies and invoices, and does this over multiple servers. let us see the log output for this code: 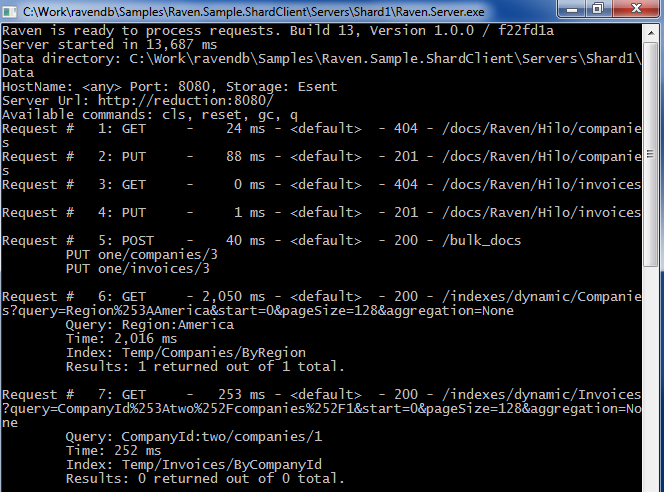 you can see a few interesting things here:

let us look at another shard now: 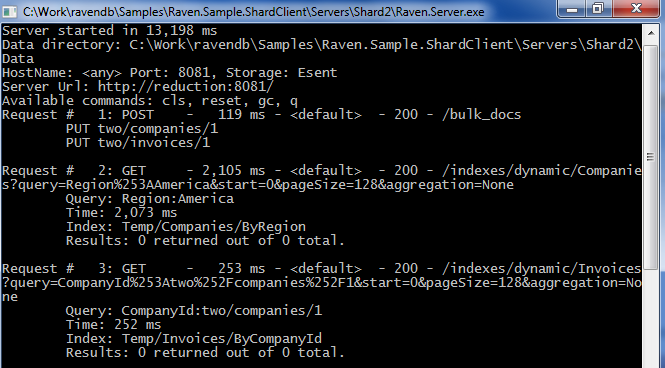 this is much shorter, since we don’t have the hilo requests. the first request is there to store two documents, and then we see two queries, both of which return no results.

and the last shard: 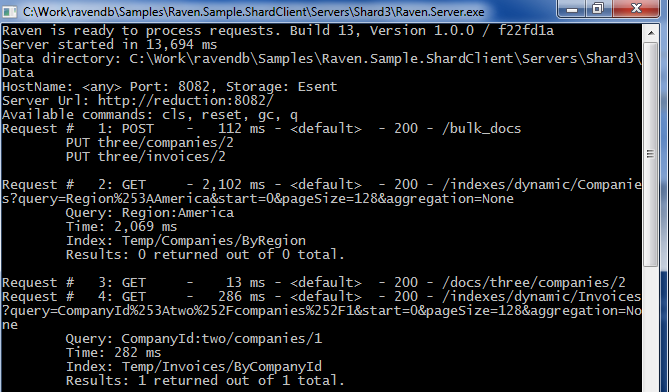 here we again don’t see the hilo requests (since they are all on the first server). we do see putting of the two docs, and request #2 is a query that returns no results.

request #3 is interesting, because we did not see that anywhere else. since we did a load by id, and since by default we store the shard id in the document id, we were able to optimize this operation and go directly to the relevant shard, bypassing the need to query anything other server.

the last request is a query, for which we have a result.

so what did we have so far?

we were able to easily configure ravendb to use 3 ways sharding in a few lines of code. it automatically distributed writes and reads for us, and when it could, it optimized the data access so it would only access the relevant shards. writes are distributed on a round robin basis, so it is pretty fair. and reads are optimized on whatever we can figure out a minimal number of shards to query. for example, when we do a load by id, we can figure out what the shard id is, and query that server directly, rather than all of them.

pretty cool, if you ask me.

now, you might have noticed that i called this post blind sharding. the reason this is called this name is that this is pretty much the lowest rung in the sharding ladder. it is good, it split your data and it tries to optimize things, but it isn’t the best solution. i’ll discuss a better solution in my next post.