I used to sign up for travel insurance during all my trips out of Japan. I used the same company again and again for years. It worked pretty well, everyone was happy... until I was unlucky and decided to make my first claim. Then I saw both sides of the insurance business.

Signing upside. I love that one. There are always very nice people at the counter. And it's not a surprise that they are good at explaining various risks and coverages associated with their plans. So I always signed up for the "cover all" package. Then walked away with the feeling of safety and a little book that no one reads.

Minimize payment due side. This is what happens when you make a claim. And this is when that little book that no one reads comes into play. Here, the insurance company is making it as difficult as possible to give away "their" money. And they are really good at it. Two things which made me truly mad were: giving me an option which would cost me even more than buying brand new things and referring to the internal policies which they were not willing to disclose.

In the end, I ended up with a little bit of cash (no, it didn't cover the harm at all and it was much smaller than what I paid them for a single trip) and feeling that I got ripped off. Of course, since that time I've been using a different insurance company. Unfortunately, I can't see how that would make much difference, because of this fundamental problem:

The company who is receiving the premium is also a decision maker regarding the claims.

You can argue that you can take it to the court and defend your rights and so on. Good luck with that. Luckily, modern technology allows you to create a different structure which can possibly change the game. I realized this after talking to one of my friends about insurance and reading about Ethereum. So here is how this can work...

The whole concept can work on the several types of blockchains that exist. I will use Ethereum in this article. Ethereum is a programmable blockchain which allows users to create applications and then execute them in trustless environments. A popular term for such an application is a smart contract. Even better, smart contracts can interact with each other. This is a great tool which can address the previously stated problem (the company who is receiving the premium is also the decision-maker regarding the claims) by separating them into 2 independent entities. The whole structure would look like this. 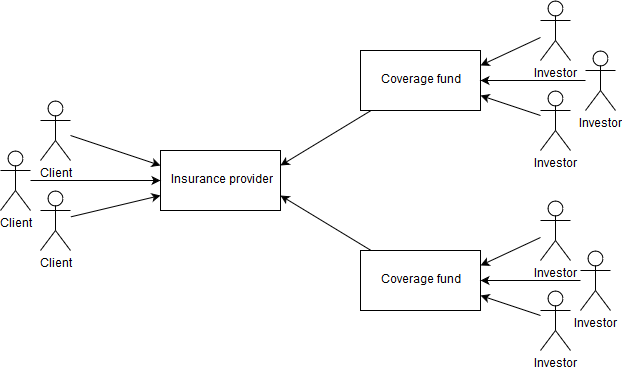 In the center, there is the insurance provider. This is purely a management entity which signs up the end clients and later decides whether to distribute the premium to one of the coverage funds or pay off a claim to the covered client. The most important thing is that the insurance provider gets rewarded for their service by a fixed base commission, which doesn't change regardless the resolution of the contract.

Then there are coverage funds. These are the funds which make a bid on each contract and take a risk while being rewarded by the premium. Coverage funds are bidding for each contract and simply the one with the best bid will win. More funds mean more liquid capital. Note that the insurance provider doesn't need to know who won the contract and therefore can stay objective during claims resolution. Each coverage fund is funded by investors. There might be funds funded by a single company. Others might be funded by thousands of small investors. It is up to the fund to decide that. Funds should be profitable on average.

Finally, there are clients, who pay the premium and expect to be covered if things go wrong.

Now let's look at how the whole system works.

Phase 1 - fund locking. To be able to provide insurance, there must be enough available capital from the very beginning. Therefore, in order to join the system, each fund is required to lock in some amount of ETH up front. The amount is based on the types and number of contracts they want to be involved in. The fund is responsible for raising the capital from investors, and insurance provider makes sure it is properly locked.

Phase 2 - contract and bidding. When funds are available, then the system is ready for the client to sign up. As soon as this happens, funds can send their bid against the contract. The best bid wins the contract. However, there is one more thing which needs to be verified beforehand by the insurance provider. Let's call it a risk of fund ruin. If some fund is taking on too many contracts, then it increases the possibility that you'll need to pay more for claims then the amount of locked up capital. Therefore, a fund might be rejected from the bid by the insurance provider and then the second best bid will win the contract at that time. This might lead to situations when two clients get different prices for the same service. However, that's just the nature of this market.

Regarding the relations. Definitely, the insurance provider has to know the identity of the clients. Otherwise, it would open space for easy cheating. However, the coverage fund only needs to know a limited bit of information about the client. In many cases, this means that the identity of the client can be unknown to the coverage fund. Additionally, the client doesn't need to know which fund is taking on the risk. The only figure that truly matters is the bid price. Other than the price, there shouldn't be any difference if the contract is the same because all decisions are made by the insurance provider who is, by definition, rewarded with the fixed commission. Also, the insurance provider doesn't technically need to know who the coverage funds are. The only important thing is to have the amount of ETH locked in the system so it can be used to pay off the claims. And, finally, it is up to the coverage funds to establish relations with the investors. It can be anything in between fully anonymous and fully transparent.

Regarding the maintenance cost. The core system is based on the Ethereum blockchain. Therefore, most of the infrastructure is provided out of the box. There is some initial development cost, which is not crazy high. After that, the whole system can run automatically in the majority of cases. The required manual actions are: claim resolution and policy/risk adjustments. Therefore, a lot of money can be saved compared to the traditional insurance structures.

Opportunity for small investors. Some coverage funds might be open to small investors. There might be a fund which allows many people to put $100 into a risk and give them a portion of each acquired premium in exchange for that. On average, all coverage funds should be profitable, and absolutely uncorrelated with the stock market. Therefore, I can see this as a way to diversify an investment portfolio.

Possible extensions. It is possible to expand this same system to car insurance, home owner's insurance, life insurance, and so on. Blockchain decentralized storage is a great place to make sure such data stays uncorrupted and transparent forever.

I have described the idea of using blockchain to change the insurance business. I just feel it would be fairer if the company who is taking the premium is not in charge of the decision on how much should be paid for the claim. Luckily, blockchain technology allows us to do that. And as a side effect of such a structure, there would be a new opportunity for small guys to invest in the insurance business directly, without the expensive middlemen.

If you already have something similar which works, then please let me know. I would be more than happy to start using that instead of the traditional insurances!