Data security is a big issue today. Even though technology has made our lives easier, at the same time, it has also raised serious issues of data breaches and hacks. From ordering a pizza to reconciling a bank transaction, we are sharing our personal data online through every click.

Lately, big brands have claimed issues implementing tight security and maintaining the privacy of personal information, but the matter is clear about how our data is being used for businesses. The current “Facebook” fiasco is a live example of how vulnerable we are to the threat of data breaches.

Not to mention, data is one of the most valuable assets in the technological environment we are living in. And if something is valuable, it's obvious it will be under threat. Cyber crimes are at an all-time high and we are not as protected as it may appear. If current security measures are not good enough, what alternative do we have in our hands? How can we mitigate the risk of online data theft? The answer is blockchain — a ledger-based new solution on the board.

Blockchain is basically a decentralized system that makes use of Distributed Ledger Technology (DLT). Unlike a centralized system where all information is stored in a few large databases, the distributed nature of blockchain provides no hackable entrance to cyber thieves. The data of each and every valid transaction is stored in a specific block, growing with new incoming data. To put it in simpler terms, the digital information can only be distributed not copied.

With a projected market worth $20 billion by the end of 2024, blockchain is the technology to look out for. And as of 2017, the main use cases of blockchain in different industries were as follows: 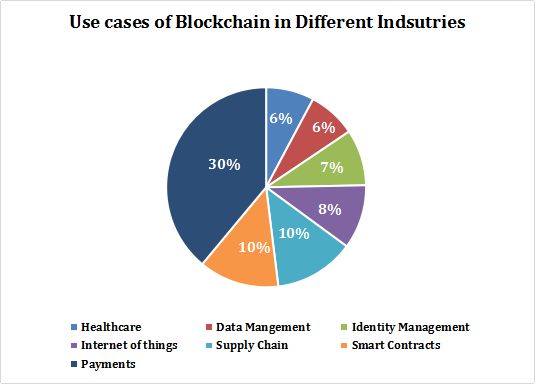 Let's see how blockchain is helping control the global crisis of data security.

What makes blockchain so secure is its decentralized nature. It breaks digital data into small fragments and distributes them across a wide network of computers. The lack of a central control point makes it extremely difficult for hackers to steal data. In addition, blockchain also prevents loss of vital information as each and every computer in the concerned network has a copy of the ledger. So, even if a few computers break down, the system will function normally.

Additionally, the data recorded on a blockchain system can be certain to be true as it is almost impossible to manipulate the information, due to there being several copies. On top of that, it is in combination with the role played by cryptographic hash functions in the system.

The data is even more secure because there is no reliance on a central point of storage, minimizing the risk of information being lost or even destroyed. Hacking the single point would be of no use as the information is stored on multiple devices globally. This is the reason that Bitcoin is the most resilient platform and has withstood barrages of attempted hacks.

Every data point on a blockchain is encrypted, and it is very easy to prove that data has not been altered. Because of its distributed nature, you can easily check file signatures across the ledgers on all the nodes across the network. And if someone changes the record, then the signature is rendered invalid.

This aspect allows us to use the blockchain ledger to verify that the data you have backed up with the third-party vendors have not been changed after weeks, months, or even years.

Blockchain technology eliminates the need for passwords to authenticate users and devices. As passwords are easy to steal and crack, this puts organizations at risk.

Each user goes through an identity check, creating a verifiable user ID that has been validated. From there, partnering financial institutes and governments can easily review a user’s personal identifying information in an encrypted format.

When a transaction is added to the blockchain, it is automatically digitally signed and stored in a decentralized system. All information, from the user to the time of the transaction, everything is cryptographically stored. The organizations can monitor the history log to doubly ensure that the data is secure from theft and tampering.

Walmart has partnered with IBM to work on a Hyperledger Fabric Blockchain to track food staples from the suppliers’ shelf. This can also prove valuable for pharmaceutical giants, which are required by law to maintain the chain of custody over every pill. Though in its infancy, the technology holds immense potential to curb the menace of cybercrime.