In the previous article, we got acquainted with the theoretical foundations of the blockchain. In this article, we implement the functionality of the passport office.

In order to generate and deploy smart contract, you need to install next tools:

Solidity is Ethereum's smart contract language. Its syntax is quite poor because of blockchain limitation and its youth.

The key function of the electronic passport office is to issue passports, update them, and allow passport owners to read them. The following interfaces are required:

They provide features to create passports (only with admin rights) and to read passports (owner rights). In Ethereum, every method caller has an account. Using the context value: message.sender, we identify the user account.

The first constant is a hardcoded value of admin account address. Only from that account, can a new passport be added and all previous passport history records be viewed.

The second line is a dictionary or key (passport owner address) value (passport JSON details) storage. I've decided to make value a string and not a struct to simplify the example.

The last variable is an array of history records that keeps a record of all changes ever done to passports.

By having a history records array, we make our application invulnerable, even to internal attacks. Even internal employees with admin access won't be able to adjust any data without being seen.

This history records track any activity and can't be deleted once transaction is approved by (half + 1) nodes. It's not possible to replace it or change it. This protection is the milestone that makes blockchain different from any other architecture. In any other systems (e.g. banking systems), transaction approval is based on one main trusted server.

The easiest way to deploy and debug you contract is to use the Remix IDE.

The first param, -l, solves a potential problem with the gas limit (it's another big story). -d, on the other hand, generates the same accounts all the time. The inequality, " > ", saves all output in a text file. 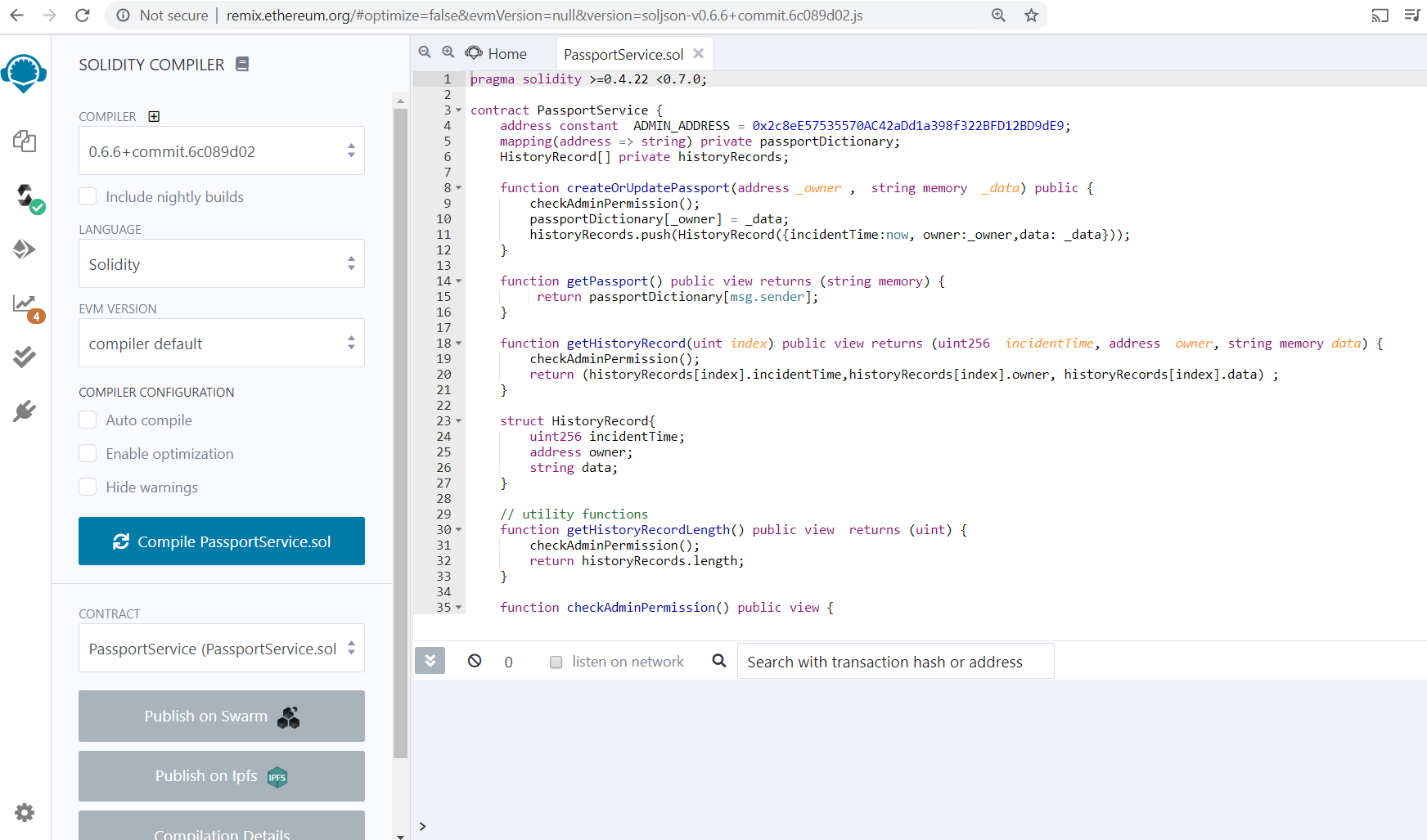 On the right side, in file explore, you can create a new contract and after compile it on the Solidity compile tab (currently selected on image). After it opens, click the "Deploy" tab, select Web3 Provider, and use recommended localhost:8545. If you can't connect to the network, double check that your ganace-cli application is running. Select the account that you hardcoded as admin and deploy: 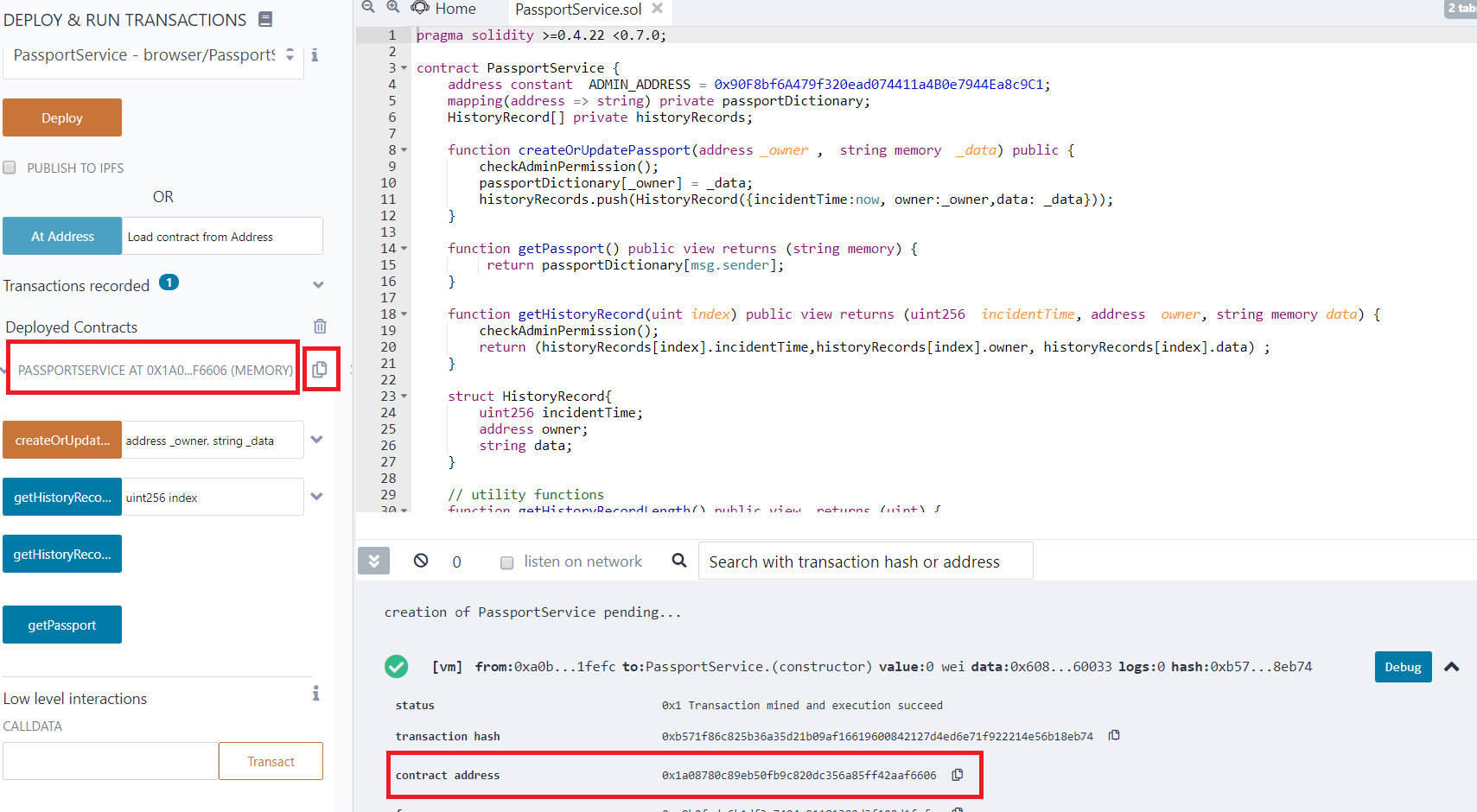 After deployment, on the left side, you can open contract interfaces and use them. When a contract is deployed, you need to save its address (on the left side there is copy button). In the Java client, this value has to be pasted in CONTRACT_ADDRESS.

Check the generated PassportService class in the folder; you don't need to change it, only call it.

Now, you can create its instance and make a call. But before that, let's take a look into the accounts generated by ganache-cli (check log file when ganache-cli is started).

At the top, we can see account addresses, at bottom their private keys. Accounts are used as passport address (like id). Private keys are used to call contract under its account. In the example, I've used the first account as admin and second one as John's account.

The result of execution:

Both articles together explain briefly what blockchain is. From theoretical and practical perspectives. I believe that this technology is new and original. Over time, the hype will go away and it will occupy its niche. I hope my article has clarified and shown the practical aspects of the blockchain.