A Microservice is a service with one and only one very narrowly focused capability. That capability is exposed to the rest of the system in a remote API. For example, think of a system for managing a warehouse: Some capabilities that might each be provided by a Microservice in such a system are:

It is entirely possible that different Microservices within a system will be implemented on different platforms - some Microservices may be on .NET, others on Erlang, and still others on Node.js. As long as they can communicate in order to collaborate this polyglot approach can work out fine. HTTP is a good candidate for the communication: All the mentioned platforms, as well as many others, can handle HTTP nicely. Other technologies also fit the bill for Microservice communication: Some queues, some service buses and some binary protocols for instance. Of these HTTP is probably the most widely supported, is fairly easy to understand and - as illustrated by the World Wide Web - is quite capable, all in all making it a good candidate.

What is a Microservices Architecture?

Microservices as an architectural style is a lightweight form of Service Oriented Architecture where the services are very tightly focused on doing one thing and doing it well.

A system that uses Microservices as its main architectural style is a distributed system of a - most likely large - number of collaborating Microservices. Each Microservice runs on its own in its own process. Each Microservice only provides a small piece of the picture and the system as a whole works because the Microservices collaborate closely. To collaborate they communicate over a lightweight medium that is not tied to one specific platform like .NET, Java or Erlang. As mentioned, all communication between Microservices, in this book, is over HTTP, but other options include a queue, a bus or a binary protocol like Thrift.

The Microservices architectural style is quickly gaining in popularity for building and maintaining complex server side software systems. Understandably so: Microservices offer a

number of potential benefits over both more traditional service oriented approaches and monolithic architectures. Microservices – when done well - are malleable, scalable, resilient and allow a short lead time from start of implementation to deployment to production. A combination which often prove evasive for complex software system.

This list of characteristics both helps you recognize a Microservice when you see one and helps you scope and implement your services in way that enable the benefits of Microservices - a malleable, scalable and resilient system. Let’s look at each in turn.

Responsible for One Single Capability

"There should never be more than one reason for a class to change."

Every Microservice should be individually deployable. That is: When you a change a particular Microservice you should be able to deploy that change of the Microservice to the production environment without deploying or in any other way touching any other part of your system. In fact, the other Microservices in the system should continue running and working during the deployment of the changed Microservice as well as after that new version is deployed and up and running.

Consisting of One or More Processes

That Microservices run in separate processes is a consequence of wanting to keep each Microservice as independent of the other Microservices as possible. Furthermore, in order to 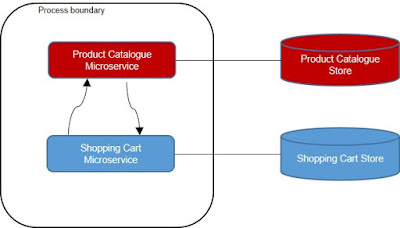 Owns Its Own Data Store

Maintained by a Small Team

So far, I have not talked much about the size of a Microservice even though the “micro” part of the term Microservice indicates that they are small. I do not believe, however, that it makes sense to discuss the number of lines of code that a Microservice should have, or the number of requirements, use cases or function points it should implement. All of that depends on the complexity of the capability provided by the Microservice. What makes sense, however, is to consider the amount of work involved in maintaining the Microservice. A rule of thumb that can guide the size of Microservice is that a small team – of, say, 5 people – should be able to maintain a handful or more Microservices. Maintaining a Microservice includes all aspects of keeping it healthy and fit for purpose: Developing new functionality, factoring out new Microservices from ones that have grown too big, running it in production, monitoring it, testing it, fixing bugs and everything else needed. Considering that a small team should be able to perform all of this for a handful of Microservices should give you an idea of the size of a typical Microservice.

That a Microservice is replaceable means it can be rewritten from scratch within a reasonable time frame. In other words, the team maintaining the Microservice can decide to replace the current implementation with a completely new implementation and do so within the normal pace of their work. This characteristic is another constraint on the size of a Microservice: If a Microservice grows too large it will be expensive to replace, only when kept small is it realistic to rewrite.

Why would a team decide to rewrite a Microservice? One reason could be that the code has become a mess. Another is that the Microservice doesn’t perform well enough in production.While these are not desirable situations, they can present themselves. Even if we are diligent while building our Microservices, changes in requirements over time can push the current implementation in ways it cannot handle. Over time, the code can become messy because the original design is bent too much. The performance requirements may increase too much for the current design to handle. If the Microservice is small enough to be rewritten within a reasonable time frame, these situations are OK from time to time. The team simply does the rewrite with the all the knowledge obtained from writing the existing implementation as well as the new requirements in mind.

Excerpted from Microservices in .NET

Published at DZone with permission of Christian Horsdal. See the original article here.