I accepted the invitation to review Java by Comparison: Become a Java Craftsman in 70 Examples (2018, The Pragmatic Bookshelf) because the premise of this book interested me. The book Software Craftsmanship: The New Imperative had a significant effect on me when I was a less-experienced software developer, and I looked forward to reviewing Java by Comparison because of its connection with the concept of software craftsmanship and its examples being provided in the Java programming language. I was provided with the electronic version of the book and I chose the PDF format for my review. 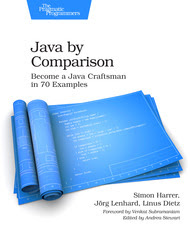 Java by Comparison uses the same format for eight of its nine chapters. Each of these eight chapters is divided into several items each with at least two code samples for each item. The first code sample for each item is typically functionally correct code, but the second code sample for each item illustrates how that particular item's principle can be applied to improve that code. There are three samples of these items ("extracts") available on the book's website to see what I'm attempting to explain here.

The ninth and final chapter is different from the first eight chapters. That chapter has fewer code samples and more descriptive text of general practices experienced Java developers tend to adopt in areas, such as static code analysis, build automation, continuous integration, logging, and working with concurrency. This chapter is mostly higher-level and provides a taste of these topics for the newer Java developer.

I consider the following to be strengths of Java by Comparison:

The "Acknowledgements" section of Java by Comparison provides insight into the intended audience. The authors started building "a collection of common issues" that students in their "Advanced Java Programming" class encountered. The "Who Should Read This Book" section of the book addresses the audience more directly, saying, "This book is for people who are learning to program in Java at a beginner or intermediate level. It's also a classroom resource for teachers who coach new developers in their journey to become programmers." The authors add, "You should read this book after you’ve learned the basic Java syntax — after you're able to write small programs with conditions and loops and you know the basics of object-oriented programming." The authors even provide a FizzBuzz-based assessment for potential readers to determine if they have the minimum recommended Java ability to make this book useful to them.

I agree with the authors' recommendations regarding who will benefit most from Java by Comparison. However, I would add that even more experienced Java developers might benefit greatly from reading Java by Comparison if they have not spent much time reading other resources, such as Effective Java, Clean Code, Holub on Patterns, or other books or online media regarding writing Java more effectively.

Java by Comparison is also recommended for more experienced Java developers who have concentrated mostly on getting the job done in the past and would like to do a better job at writing code that is more than sufficient and is easier for the next developer who has to work with it.

Java by Comparison applies a novel approach to presenting ideas for beginning and intermediate Java developers to learn techniques they can practice to become better Java developers and to write better code that will benefit others and themselves.

There are three sample "excerpts" available to give a prospective reader an opportunity to determine if he or she likes the format and style of writing. There are listed below. I have also included links to others' reviews of Java by Comparison because we all have different tastes and experiences and it might be helpful for prospective readers of Java by Comparison to read what others have said about the book.